Heaney voices his poem to the late 18th century Irish revolutionary whose tenacious personal ambitions for Ireland were scuppered amidst the political and religious storms of late 18th century Irish and European events. It contains elements of parable to do with the difficulty of uniting behind a single banner what are effectively two Irelands, as elusive in the 1790s as it is in the year Wolfe Tone was written.

In the first panel of the triptych Tone’s shade adopts Heaney’s boating metaphor to appraise his performance: I ought to have stayed afloat, he suggests, but came to naught; I was at best a one-man operative (light as a skiff) nimble and agile in traffic (manoeuvrable) but let down by circumstances (outmanoeuvred).

The revolutionary fashion I adopted (affected epaulettes and a cockade) and the ‘aristocratic’ way I chose to express myself (wrote a style well-bred) were not conducive (impervious) to uniting Irish Catholics and Protestants (solidarity I angled for) so when everything was up (just as military leaders fell on their swords after defeat) I slit my own throat (played the ancient Roman with a razor).

HV (129) The second ‘movement’ of this three-movement self-elegy reflects on the ultimate collapse of the revolutionary attempt. This is the moment of parable in the poem, as Tone invents a metaphor for himself – that of a ‘shouldered oar’… It is at this parabolic moment that the persona of Wolfe Tone and the person of Seamus Heaney converge: we feel in the lines a glimmer of Heaney in Ireland after 1972 and his stress about the poet’s role amidst social breakdown.

Tone continues to weigh up what went wrong: the scuppering of a sea-born armada of liberation set to land in Bantry Bay cost him his prowess (shouldered  oar); they locked him away inland (far from the brine), snuffing out his revolutionary spirit (whiff of venture) and leaving him to face his critics … the butt of rural moans and groans (scratching-post), a stake without an emblem (crossroads flagpole) who failed to engage those essential to his dream of unification (out of my element among small farmers).

The poem’s third movement … plunges us into the 1796 gale that drove the sea into the French ships and sent them running, bare-masted, before the wind

Considering himself within a whisker of success, Wolf Tone’s nightmare (I who once wakened) revisits the scene of storm-driven failure: the cries of casualties rising from the dead (from the bottom of the sea); sailors asleep (in their shirts), overwhelmed by the suddenness and violence of an onslaught (Atlantic stove our cabin’s dead lights in) that cost all hope of an independent state (Ireland dwindled) and left Wolfe Tone and his French allies to the mercy of sea and storm (we ran before the gale under bare poles).

Wolfe Tone (1763 –1798); leading Irish revolutionary figure and one of the founding members of the United Irishmen … Sympathetic to the Catholic cause he urged co-operation between the religions in Ireland as the only way of obtaining the redress of Irish grievances; he co-founded the Society of United Irishmen initially seeking moderate parliamentary reform. Some progress was made on behalf of property-owning Catholics however secular animosity threatened the peaceful intentions of the movement and Tone began to promote direct action on behalf of “men of no property”. Unfulfilled at home Tone saw the possibility of overthrowing the Kingdom of Ireland via links with the post French Revolution (1789) government in France. Rumours of a French invasion of Ireland did not go down well with his Catholic supporters and led to political backlash and a period of exile in America for Tone and his family. He ended up in Paris in 1796. Tone persuaded the French to send forty three ships and fifteen thousand men on a military expedition that would land in Bantry Bay; officially commissioned as a French adjutant-general he was on board. He was scathing of poor French seamanship that prevented the force from landing in Bantry Bay owing to violent tempests (caricatured by James Gilray in his painting of ‘The Destruction of the French Armada’ (1797); the fleet returned to France. Napoleon Bonaparte was not disposed to invade Ireland but agreed to a number of forays. Tone took part in a third unsuccessful raid and was captured at Buncrana. Despite his French adjutant-general’s uniform Tone was recognised. At his trial by court-martial in Dublin on 8 November 1798 Tone made a speech avowing his determined hostility to England and his intention “by frank and open war to procure the separation of the countries”. He requested to be shot as a soldier but fearing this would not be sanctioned he committed suicide in prison at the age of 35.

HV (129) judges the poem ‘one of the best in the collection’ neither in the ‘parabolic mode of abstraction’ nor in ‘personal lyric mode’… Heaney adopts a historical persona … whose attempts to foment insurrection with naval aid from France failed both in 1796 (through storms disrupting the armada) and 1798 (then the French ships were intercepted off Ireland’s west coast, and Tone was captured) … Tone committed suicide in jail.

HV (129) A poem such as ‘Wolfe Tone’, though reaching back to a historical personage and to the complex historical events of the Irish 1790s, refines both personage and events into a few bold strokes, out of which it makes a telling triptych. On the left, we see the cockade and the razor, like a saint’s attributes; in the middle, we are shown the oar, a symbol; and to the right, we face the gale. 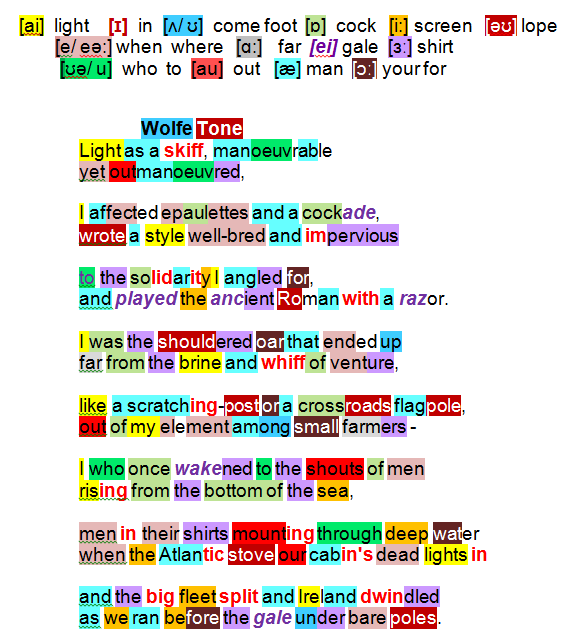