Heaney employs a kind of poetic software package to produce a feature regretting the ‘dwindling’ of the Irish experience and the replacement of Old Ireland including its Irish language and Gaeltacht by a modern culture that is capitalist, self-centred and anglophone. The narrative includes a sideswipe at the Catholic Church but finally wishes it to be known that there is still time to protect old values – the scribbled message in the sand sure to be erased by the tide is preserved in the eternal present of his poem.

The Shooting Script is aimed at the Irish-minded, providing imagery and scene directions bristling with specialist vocabulary.

Setting 1 presents the Irish ‘cultural imagination’ of a previous  age – characters fixed in a  single frame, photo or a postcard (held shot),in one of Ireland’s Gaeltachts where the Irish language was actively spoken and signage was in Irish.

Heaney uses pan and zoom effects to add movement to his message of cyclists setting off (riding away) from a storybook previous (whatever might have been) into an impossible dream (what will never be … the future).

The agents of survival and renewal are present (teachers on bicycles) in optimistic conversation with the last generation for whom Irish was routine (saluting native speakers) in its period setting (treading the nineteen-twenties), crusading (still pedalling out) to the limit of the screenplay’s scope (end of the lens) yet unpersuasive (not getting anywhere), imprisoned by demographic and linguistic change (not getting away).

Setting 2 dissolves visual images into a single vivid colour background (mix to fuchsia) in which the living Irish issue (‘the language’) gives way to a prolonged silence (long soundless sequence).

Via an assortment of visual effects from expansion (pan) to melt (fade) Setting 3 introduces sound (voices over) a younger generation speaking in English with an Irish accent (different Irishes), discussing commissions (translation jobs) and income (rates per line).  How different from the parochial images of yesteryear (nineteenth-century milestones in grass verges) and the limited focus of juvenile literature of the time (names like R. M. Ballantyne).

Mimicking the ‘how-quickly-can-you-guess-what-this-is’ of satire, Setting 4 fixes attention on a controlling influence in Catholic communities, zooming from the close-up of a reflective stud (cat’s eye of a button) to the countenance of a Catholic priest – a senior figure judging by his pellegrina (cape of a soutane) – with standard three cornered headgear (biretta), cleric’s symbol (Roman collar) and prominent maleness (Adam’s apple). His stern and stony impassiveness says it all (freeze his blank face).

Setting 5 announces the standard end-of-film list of contributors (let the credits run) but just when the audience thinks it is the end (looks as if it is all over) Heaney appeals to those who care.

Setting 6 adds a final video element tracking the incoming tide (long wave up a strand) threatening (breaks towards) a surreal instrument scribbling furiously (stick writing and writing) in Gaelic characters (words in the old script) onto a surface destined to be washed clean (running sand). All is not yet lost, he is saying, but we need to hold the line!

DOD 315 ‘ the writing in the sand will go on, ‘just when it looks as if it is all over’. ‘A Shooting Script’ belongs in a clutter of poems towards the end of The Haw Lantern, all of them about the doubleness of Irish experience at any moment: on the one hand there is the sensation ( ) that Ireland is ‘dwindling’… on the other hand there is the constant possibility of renewal … I don’t believe that faith in Irish as a language and a value is misplaced; the evidence suggests that it now inheres in the cultural imagination of anglophone Ireland as a vital element. The TV slogan about it may sound trite, but it does express a common enough attitude: it’s ‘part of what we are’. This isn’t to say that the demographics are about to change in its favour; but a line will be held, I am sure, and there will continue to be a small, small Irish-speaking population. 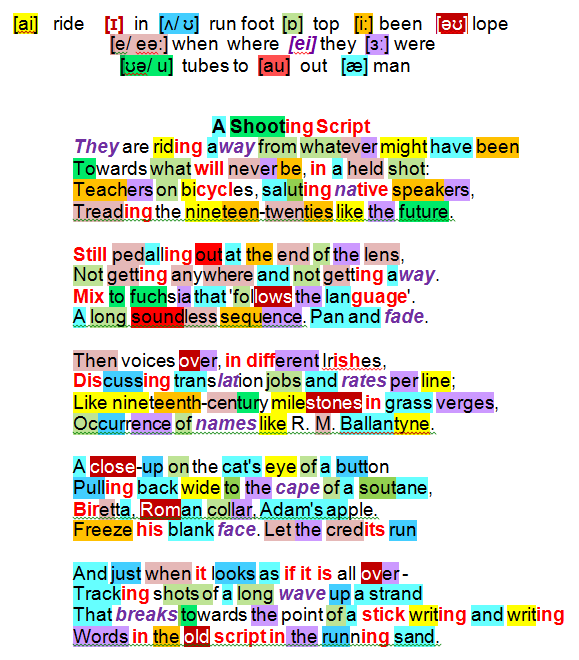