Heaney’s Song of the Bullets predicts dark times around the corner for Northern Ireland.

Heaney’s title suggests a musical setting. In fact sound accompaniment will be provided not by musicians but by agents of death personified to utter their own message of predominance and power.

On the face of it a long-time rural observer of events as they develop around him watches from his personal space (yard). The situation appears reassuringly stable – the distant firmament is unchanged (usual stars) whilst closer to the Earth the comforting presences of the solar system (still and seemly planets) shed their light, albeit frail (lantern-bright), above familiar ground at dusk (our darkened hill).

Suddenly his radar is disrupted: an abnormal signal (star that moved, I thought) is confirmed (something moved indeed) rising into his line of vision from behind the massed skyline, a fast-moving, glowing projectile (ardent silent speed) on a path that at its highest point (zenith) intersects a second on a parabolic trajectory (swung up) ominously reminiscent of a farm practice that sliced down living grass (scythe-point through its swathe).

These are tracer bullets – the first risoluto con calma (one began to sing) talks ballistics and destructiveness: there are plenty of us (sky at night is full of us); we traffic doom (slugs of lead lie cold and dead); we fly towards you (our trace is on the wing); our discarded components (casings … blunted parts) lie around (gathered up below).

We are not answerable – justice stands aghast and stares as powerless as sun on arctic snow; we are not directly accountable (our guilt was accidental); hold us responsible if you insist (blame, blame because you must) – to do so would be as pointless as censuring male lust (young men for semen) or arid surfaces for lack of moisture (the moon for moondust).

The first voice runs out of steam: acoustics change (ricochets that warble close) accompanied by rallentando then morendo (die away on wind) – via the lowest female frequency (hard contralto sailed across) to complete silence (stellar quiet reigned).

The second tracer (the other fireball) picks up the refrain bellicoso, declaiming the paramilitary hard-line (iron will); its purpose to impose a new order (hoop and cooper worlds) by whatever means (beyond the killer and the kill).

You can see it in the all-consuming glint of the sniper’s stare (marbled fires) and his routine (steady eye … narrowed, sighted, paused … fire), hell-bent on splintering the status-quo (glaze the shape of things) until a new normal is in place (the shape’s imposed).

Jolted from his reverie (now wind was blowing) the speaker no longer has a good feeling: the sky overcast (clouds blanked the stars), those comforting lights no longer visible (still and seemly planets), storms in the making (our darkened hill).

Twelve years earlier Heaney’s poem ‘Whatever You Say – Say Nothing’ (North – 1975) was predicated on an IRA warning to people: refrain from unguarded political or religious comments or risk a violent response. Between then and The Haw Lantern the cycle of murder and revenge has ebbed and flowed at the hands of military and paramilitary groups on both sides of the sectarian divide.  Man-killing weaponry has become more sophisticated.

In his later collection Seeing Things (1995), Settings xxi Heaney describes his one and only experience of firing any kind of ‘bullet’. Taking his one and only potshot represented a new music (the bullet’s song) and awakened the sense of its destructive potential (sense of what rifle meant). The Song of the Bullets is its imaginative prequel. 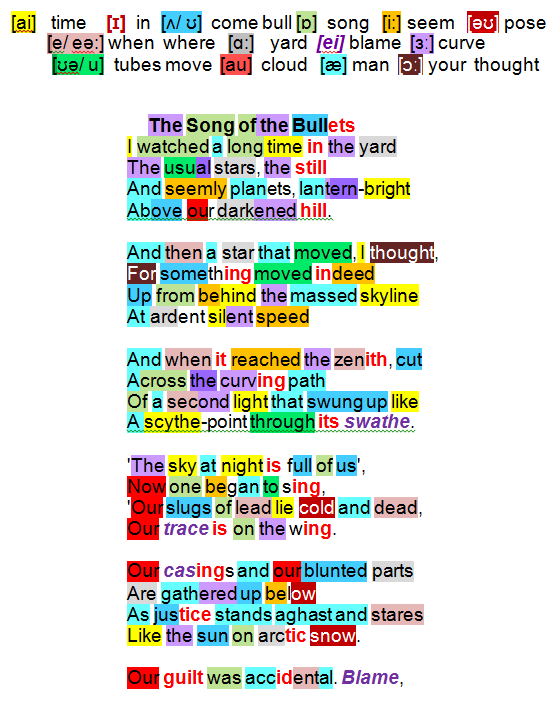 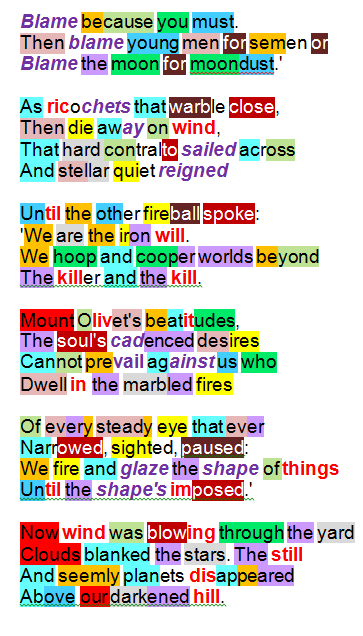