Heaney addresses twin obituaries to an anonymous someone who played a fundamental role in his development. Retrospective clues identifying  his father Patrick Heaney will appear in the next collection, Seeing Things:  ’a solid man, a pillar to himself and to his trade …can sprout wings at the ankle …fleet as the god of fair days ‘ (Crossings xxvii) and, reflecting on the house Patrick designed and built at The Wood, plain, big, straight, ordinary…a paradigm of rigour and correction, rebuke to fanciness and shrine to limit (Crossings xxxiii), finally the quoted judge who suffered no fool gladly (The Ash Plant).

Heaney tells of his long-standing closeness (old…friend) to an uncompromising figure (hard) – someone who at times actively looked for trouble (you sought occasions), was arguably cantankerous for good reason (justified anger), who constantly prodded Heaney (buff me) to be as fair and honest (the soul to ring true and plain) as the farm equipment close at hand (galvanized bucket) – and his temperament could demonstrate what he meant (kick it to test it) or smack it powerfully to rid it of waste (whack it clean like a carpet). A straight, no-nonsense man letting fly at himself (turned on) when faced with his own shortfalls (ferocious).

Heaney’s second missive describes a father who did not mince words (abrupt), whose country clothing and strength of will protected him against what might tear him (thornproofed), distant and uncommunicative (lonely); a forthright defender of rural traditions (raider from the old country), reverent (night prayer), confrontational when he felt something was not morally right (principled challenge).

This was a man who collided with the re-ordering of old rural practices and compromise – barriers removed to his mind, unreasonably (ought still to be there) – to the point of overreaction (overshooting into thin air).

Heaney pays vocative tribute (O) to his father’s persona: his integrity (upright), ‘maimed by self-doubt’ as Heaney will describe him in ‘The Stone Verdict’ (self-wounding), his solid high-minded beliefs (prie-dieu), his Hermes-like invulnerability brought down by age and illness (in shattered free fall). 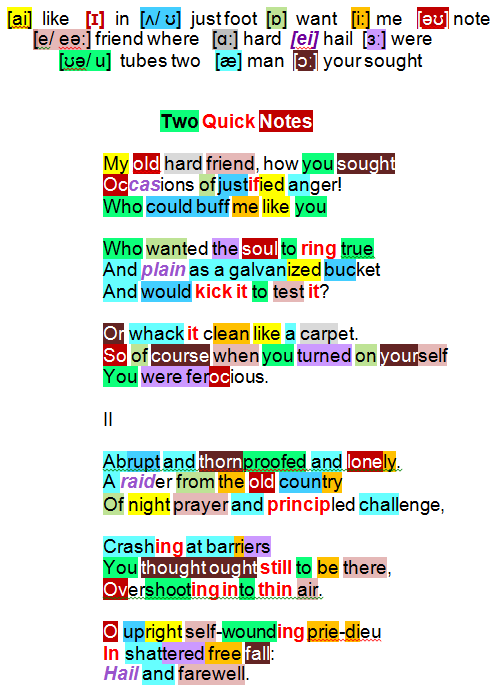