Heaney indicated that he had strongly considered The Stone Verdict as a title for the collection (DOD290).

Elegising his father Patrick Heaney, the poet imagines an alternative memorial to the headstone which stands in Bellaghy churchyard. In a collection that bristles with classical references he turns to a classical source and builds a burial monument that elevates his father to divine status.

Heaney places the ‘shadow’ of Patrick Heaney in the judgment place,  not in ‘particular judgment’ before God post mortem but before a ‘jury’ of his mid-Ulster peers, instantly recognisable to those who lived or worked with him with his iconic ash-plant (stick in his hand) and head-gear (broad hat) – the same acutely sensitive Patrick Heaney (maimed by self-doubt) who suffered no fool gladly (old disdain of sweet talk and excuses) – a man for whom a summary throw-away verdict would be totally inadequate (no justice if the sentence is blabbed out).

Accepting the gravitas of the moment (ultimate court) Patrick would expect something more than words given his taciturn manner (a lifetime’s speechlessness).

Heaney summons (let it be) a very apt classical precedent – the judgment of Hermes, now identified with cairns (God of the stone heap). On trial for killing Hera’s dog, Hermes waited for the gods to judge him innocent by laying their voting-pebbles (the stones were verdicts) at his feet (solidly … piling up around him) binding his proxy Patrick Heaney (waist deep) into the rough stone memorial that elevates him beyond mortal status (his apotheosis).

One of these days, Heaney predicts, on some mid Ulster site reminiscent of Patrick Heaney in life (a gate-pillar or a tumbled wallstead) where Nature shares the solemnity of the moment (hogweed earths the silence) someone will be prompted to a warm recall (‘Here his spirit lingers’) …  such a moment will be all but impossible for the poet to bear (will have said too much). 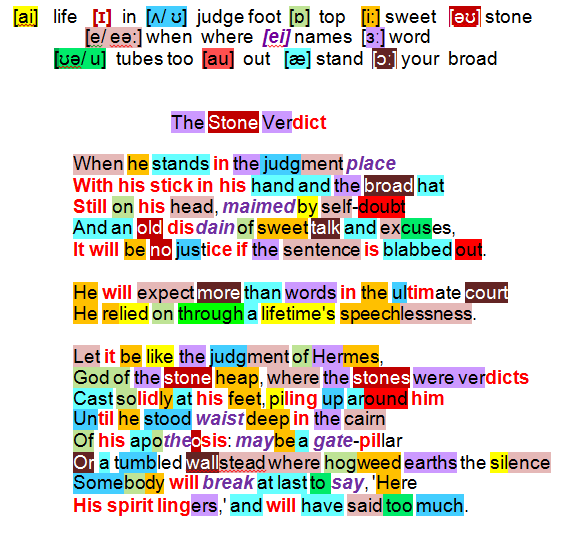