As early as Blackberry Picking with his family in Death of a Naturalist (1966) child-Heaney discovered perishability In the world around him, laws of mutabilty that reduced stored treasure to decomposition, pleasurable blackberries to ‘rat-grey fungus’. The experience offered him two lessons, firstly that nothing remains in its perfect state for long and secondly that moments of poetic charge from whatever source can and do spark an involuntary welling up of emotional consciousness within him.

The heart-on-ones-sleeve responses of that early poem are replaced, in the metaphysical parable of Hailstones, by the outcome of a childhood experience in which ice melted into nothing and how its nothingness in the mind of a child destined to become a poet became an ‘absence explored now by the poet in his late forties.

Child Heaney describes in the way of a child  the unprecedented, painful assault on his five-year-old body (my cheek was hit and hit) by pellets of frozen rain (sudden hailstones) energised by a squall (pelted and bounced on the road). Once the hail storm ceased (cleared again) something began to fade immediately – both stinging pain and consciousness of a hidden lesson (something whipped and knowledgeable).

The boy turned his attention to what was lying there (my chances). He collected and compacted the icy pellets (small hard ball) only to discover a contradiction: melting ice inflamed his fingers (burning water running from my hand) and body heat reduced the ball to nothing.

Forty years on he is creating a poem (just as I make this now) transmuting the disappeared 1940s’ ice-ball (melt of the real thing) into chapped memory of its living moment (smarting into its absence).

For a primary school-age youngster hailstone squalls impacted negatively (to be reckoned with): they resembled unruly children (those brats of showers); they kept him in detention at playtime (refused permission); they were attention-seekers (rattling the classroom window); they reminded him of corporal punishment in school (a ruler across the knuckles). Above all, the youngster noted, they were pristine when they landed (perfect first) but quickly impaired (in no time dirty slush).

An early author of childhood experience, mystical poet Thomas Traherne, delighted in the orient wheat that credited his world (proof and wonder).

Nothing so high-flown for young Heaney and his pals around Castledawson (for us) – just things things that gave pain (sting of hailstones) and things that felt no pain – the unstingable hands of Eddie Diamond, a local farmer ‘grasping the nettle’ to improve his cattle-feed (foraging in the nettles).

Recall now of the lumpy, epidermic after-effects of ice pain (nipple and hive, bite-lumps) plus an agreeable early sense of furtherance that faded away (small acorns of the almost pleasurable) is signalled then snuffed out by the passing of the squall (intimated then disallowed). The net outcome: the whole episode was put on hold (wait).

‘It might have taken me forty years’, says Heaney, ‘but I am feeling it now!’- the uncontrollable welling-up of sensibility (dilation) triggered by that hailstone blueprint for all that followed (truest foretaste of your aftermath) embedded once the storm passed (light opened) in the continuing life on the Hillhead Road outside Mossbawn (car with wipers going still) and spurring him to recover that transitory moment (perfect tracks in the slush) – a submerged metaphor for this mobile act of writing, which lays its own perfect, printed tracks in the inevitably disintegrating slush of the actual (NC142).

DOD287 There are a couple of lines in another Haw Lantern poem (Hailstones) that refer to ‘the melt of the real thing / smarting into its absence’. They’re about the sensation of holding a ball of hailstones in your tightly closed fist… But they also point to one of the main concerns of the book: call it loss of faith … loss of faith, to a certain extent, in language itself, or at least doubts about the ‘real presence’ behind it … I didn’t see this as clearly at the time, but now I can see also that there’s a countervailing impulse at work, a refusal to discredit ‘the real thing’, however much it may be melting.

NC ‘Hailstones’ strikingly uses the word ‘dilation’ as does the essay ‘The Main of Light’… written for the festschrift volume Larkin at Sixty (1982) and reprinted in The Government of the Tongue (1988) and Finders Keepers (2002).on Philip Larkin, where Heaney says of the poem ‘Deceptions’ that ‘It is this light-filled dilation at the heart of the poem which transposes it from lament to comprehension‘, an observation which may feed usefully back into an interpretation of the Heaney poem Itself (138);

… the word ‘absence’ is a significant one (recalling) ‘Sunlight’ in North (‘There was a sunlit absence’), ‘Gifts of Rain’ in Wintering Out (where ‘I cock my ear at an absence’, that of the Irish language) and ‘Station Island’ … where a meditation on the death of a child provokes the sense of an empty space, like an absence stationed in the swamp-fed air’).  In ‘Hailstones’ the word occurs once more (in the context of) a childhood experience – that of being hit by hailstones ( ) likened to the making of the poem itself, which replaces the experience (139); 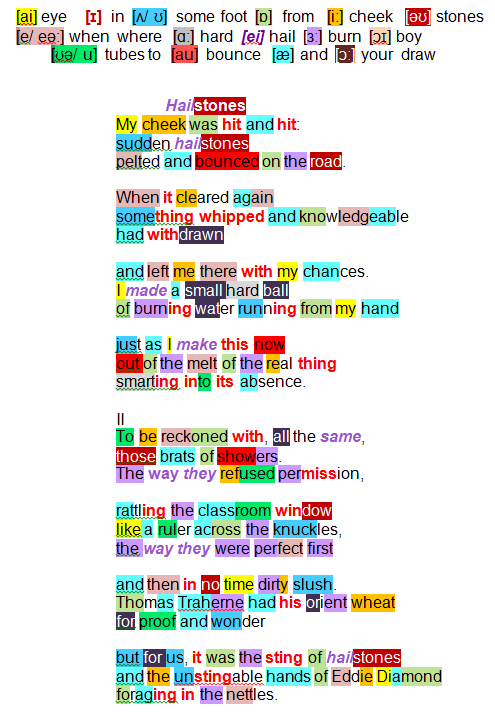 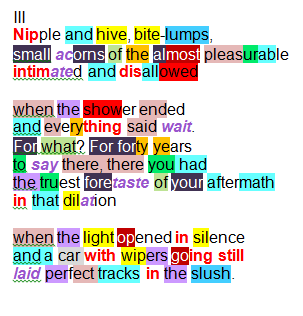