A nameless ‘foreign correspondent’ –let us call him ‘Correspondent’ – reports back on an unnamed land.  For all the anonymity, however, we recognise the voice as ‘Heaney’s and his unspoken nowhere as his own land, the island of Ireland. As it develops the poem will reflect deeply and emotionally on the notion of Irish nationhood.

Heaney very much regrets that those who would might have wished to change the face of Irishness failed and still fail to change the ‘language’.

Correspondent reports first on a neighbouring ‘elsewhere’ (I have heard of) – read ‘France’ – where something ‘absolute’ emerged from its scientific thinking: a unit of length fixed in a durable bar of platinum, accurate to within a nanometre produced by an intellectually forward and communicative people (logical and talkative nation) – by implication the intellectual base lacking his own nation.

This benchmark (standard of measurement) held good in every circumstance (every calculation and prediction) from the sumptuous trappings of the Ancien Régime (throne room) to the restrictive proportions of post mortem (burial chamber).

Correspondent would have felt at ease (at home … slumbering) within its intellectual turbine (inside that metal core) and enlightened development (very hub of systems).

He turns towards and identifies with his own race (we… us) … scattered to the four winds (dispersed people) … with a disrupted evolution (history) that succeeded in undermining self-belief but never eroded the sensation of solid if nebulous Irishness (sensation of opaque fidelity).

Correspondent speaks with great feeling: separation and dispersion (when or why our exile began) triggered by physical  invaders and the power of the English language (speech-ridden) that excluded indigenous Irish cannot snuff out the emotional welling-up of the Irish heart (solidarity comes flooding up) at any mention of fabulous tales of Romantic Ireland  – legends of infants dispatched  in coracles towards some better place (destiny) or the remains of legendary Celtic monarchs (kings’ biers) aboard boats bearing them (heaved and borne away), on river’s shoulders to some distant horizon (sea roads).

Being Irish is a herd instinct (recognize our own … fall in step) that, using litotes, conceals a wide range of differences (not altogether come up level).

Heaney rrecalls two moments of deepest contact with his Irish heritage: the first during student days’ summer work (three levels below the street, so ‘deepest’) on crowded London transport (underground strap-hanging back to back on a rush-hour train), so poignantly expressed twelve years on in the title poem of District and Circle (‘the only relict of all that I belonged to’); the second (in a museum once) buoyed by the springtime fragrance and sensuality of a pure blooded mid-Ulster wife (I inhaled vernal assent from a neck and shoulder) as she feigned interest (pretending to be absorbed) in Neolithic Irish artefacts (absolutely silent quernstones).

Scrutinizing the things Correspondent took for granted (unspoken assumptions) revealed hidden truths to him (force of revelation) as to the dwindling of the Irish experience. Heaney rounds on those who are part of the process – those who from the outset (the first of us) go along with power and political influence (assent and votes) in a society where wealth is all (rich democracy) are the ones hammering the final nail (last of us) into the coffin of shared Irish legacy (killed our language).

Those who would wish to change the situation must first change the language. Using an extended metaphor Correspondent appeals for direct action, urging those who say they believe in Irishness to credit what it actually is – a physical reality (sight of a fish) and not just some idea that it is there somewhere – the sound of its splash (heard jumping) or signs that it has been and gone (its ripples). Omission, he avers, will sentence Irishness to incremental oblivion (one more of us is dying somewhere). 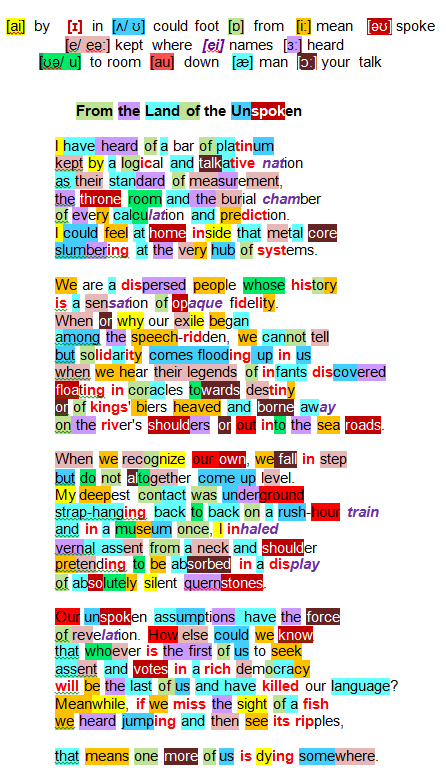