He who composes the poem provides the key to understanding (‘ordained opacities’ line 9).  If we are to enter The Stone Grinder easily then sifting the clues Heaney provides is key.

On the one hand legendary queen Penelope of Homeric legend with a mission to achieve (some guarantee of a plot) in challenging circumstances; by cunning construction and deconstruction of her shroud (she unweaved at night) she engineers a successful outcome for herself advance it all by a day), defeating unworthy male intrusion in the process; her story and her ‘plot’ are memorialised in Homer’s classic.

Alongside queen Penelope an unpretentious figure of old Irish pedigree – a tetchy stone grinder who has laboured at the same job throughout his working life (Me, I ground the same stones for fifty years). He ‘deconstructs’ rotating one heavy, flat circular stone against another to produce flour from cereal, powerless to bring about any other outcome (what I undid was never the thing I had done).

His alter ego (let us call him Poet) is a ‘constructor’ turning poetic charge into works of art. What links them is the Sisyphean struggle they both undertake to produce what they do with the tools at their disposal.

Some there be who have no memorial – neither the stone grinder’s name nor his face will be seen on any Roll of Honour (unrewarded as darkness at a mirror).

The narrative re-focuses on construction: Poet preparing the blank sheet (my surface) from which he hopes something durable will emanate (survive what came over it). He is part of an industry, a centuries’ old history of cartographers, printmakers dealing with labour-intensive challenges all that lining and inking.

Poet makes it clear that he who pays the piper calls the tune: the clarity or complexity of his poetic construction will be as he determines (I ordained opacities) … take it or leave it!

His publishers read the tea leaves and took the gamble (they haruspicated).

Their respective functions were different; the printers started each commission from scratch (new start … clean slate every time). For Poet, however, it was all construct and deconstruct, compose and edit, with something of the stone grinder’s repetitiveness (coming full circle) except that Poet is able to refine what he does (ripple perfected in stillness).

Poet pauses to consider whether he merits some kind of plaque.

So … should anyone get round to thinking of a memorial (commemorate me) they should be mindful of the stone-grinder’ labour, staying power and quarried materials (the faces stripped off the face).

The ‘opacity’ (Poet’s prerogative as he has made it clear) of the poem’s final sexual imperative suggests the hit-an-miss of creative writing (practise coitus interruptus) given the discarded evidence of those who went before (a pile of old lithographs). 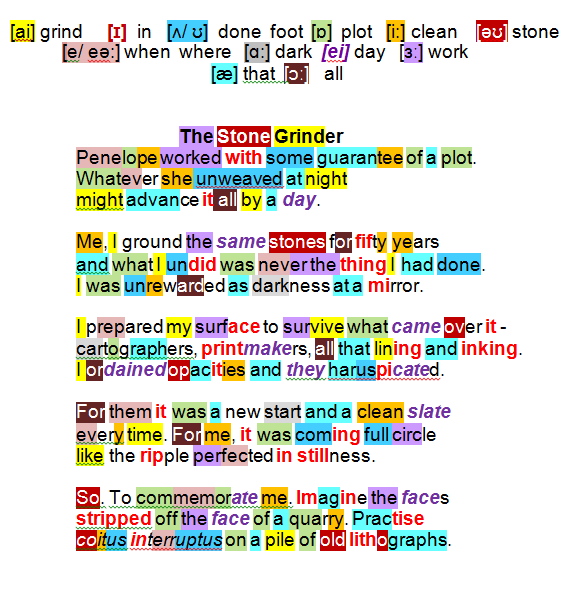