In the anonymity of Heaney’s ‘From the…’ world, somewhere can be anywhere … except that we recognise a road block mounted by the British Army somewhere in Northern Ireland in the post 1972 period, acknowledge that Heaney is the man behind the wheel of his car and that, similar to the fate of a nation under occupation, this poet’s life and career have undergone humiliating stresses and strains of others’ making.

The piece’s first 12 lines adopt a kind of ‘cinéma vérité’ approach – portraying threatening subject matter, exposing an unpleasant reality that so many Irish people suffered at the time, reducing military scrutiny to its basic routine and repressing personal feelings on both sides – survival.

Only when the poet crosses a virtual frontier into the land of writing will he enjoy freedom of thought, emotion and expression … the pleasures of vocation.

Heaney, real-time driver, enters the cramped, constricted void (tightness and the nilness round that space) of a checkpoint (car stops in the road). Soldiers check external data (inspect its make and number). In a neat cinematographic ‘take’ the stooping movement of one (bends his face) reveals an outer circle (more on a hill beyond) of men meaning business (eyeing with intent), ostensibly relaxed (down cradled guns) but masters of all that they survey (hold you under cover).

A checklist of questions (everything is pure interrogation) is followed by gun-directed permission for the driver to proceed (rifle motions and you move). The driver adopts an indifferent expression but avoids making it too blatant (guarded unconcerned acceleration).

He emerges from roadblock limbo a little emptier, a little spent, only too aware of his repressed anger (that quiver in the self) at having bowed to the control of occupying forces in his own land (subjugated, yes, and obedient).

Heaney the poet pens an identical journey into his own creative land (So you drive on to the frontier of writing) deliberately close in its allegory to his previous journey (where it happens again): this time it features a different artillery of opposition (guns on tripods) – self-important adjudicators(sergeant with his on-off mike) communing on grape-vines (repeating data about you) – grudging approvals of his performance (squawk of clearance) – pundits taking pot-shots (marksman training down) – predatory strikes from blind-spots (out of the sun) set to devour him (like a hawk).

Then suddenly survival beckons (you’re through) – having been put to the test he has passed (arraigned yet freed) and emerges through the saturating blur of a cataract (from behind a waterfall) onto a solid highway that stretches away in front of him (black current of a tarmac road), leaving the forces of opposition in his wake (past armour-plated vehicles), watching symbols of threat (posted soldiers flowing and receding) dissolve slowly into lyrical poetic form (tree shadows) further embellishing his creative journey (polished windscreen).

Heaney’s next volume Seeing Things (1991) in Crossings xxxi illustrates this kind of poetic dissolution where under poetic charge things melt into something else: You drive into a meaning made of trees./ Or not exactly trees. It is a sense/ Of running through and under without let’. 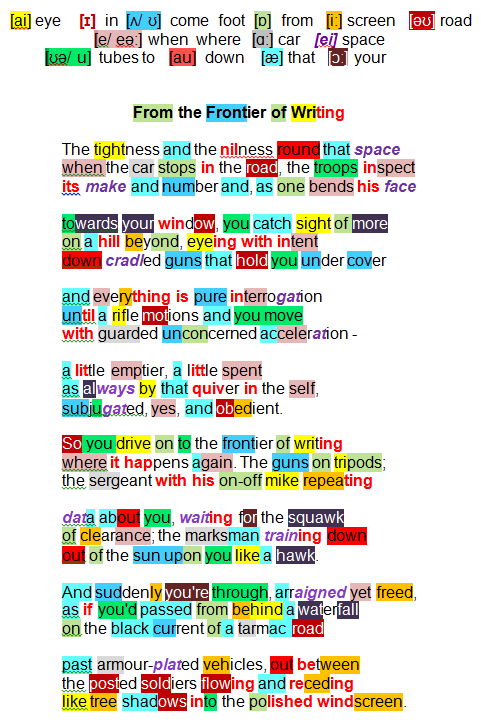