In this fascinating poem Heaney seeks to shed light on tantalizing questions. What is self-doubt?  What is ‘art’? Where does it begin and where does it end? Is there a place alongside ‘art’ for ‘art form’? Where does he stand?

He shines his lamp on what makes people tick – historical or classical figures or characters in tragic drama  – and finally what makes him tick. He claims his ‘light’ is generated from pursuits he follows, the ‘art’ writing poetry and the ‘art form’ of catching fish!

Jacques Louis David’s canvas of Socrates pictures him on his death couch (day he was to take the poison), holding forth to friends, supporters and gaolers. Heaney is perplexed that, after a lifetime of learned dialoguing involving reason, reflection and interrogation Socrates confessed to a total volte-face (putting Aesop’s fables into verse).

Not, Heaney suggests, to do with ‘philosophy’ per se – (not because Socrates loved wisdom) nor fear of being put to the test (advocated the examined life) but rather down to a dream claiming a relationship between the philosophical (lÒgow – rational account) and the poetic (mËyow – myth, story).

Heaney turns his focus on the imaginings of power-brokers of history whether victims, perpetrators or empire builders (Caesar, now, or Herod or Constantine) and the ruthless megalomaniacs of tragedy (any number of Shakespearean kings) – all sharing the pressure-cooker of temperament until they could control it no longer (bursting at the end like dams).

Heaney spells out how, in these cases, inherited psychologies or psychoses (original panoramas) remain dormant (lie submerged) until the pressure is overwhelming (have to rise again) and things turn nasty (the death scenes). One finds such narratives credible (believe in their believing dreams).

Heaney is baffled (hardly Socrates) – a man revealing a recurrent dream with one instruction – practise the art that he had never questioned until his moment of doubt that philosophy might not be an ‘art’ at all.

Heaney turns finally to himself: whilst appreciating Socrates as a fellow man with a natural gift he has had no second thoughts himself (happy … practising the right one from the start). He offers two corroborators, one an undisputable ‘art’ (poetry), the second regarded by many as an ‘art form’ (fishing): they cause him no nightmares (whose nights are dreamless), come from deep within (deep-sunk panoramas), surface (rise) and shine brightly sifted through narrow apertures the rod’s eye or the nib’s eye). 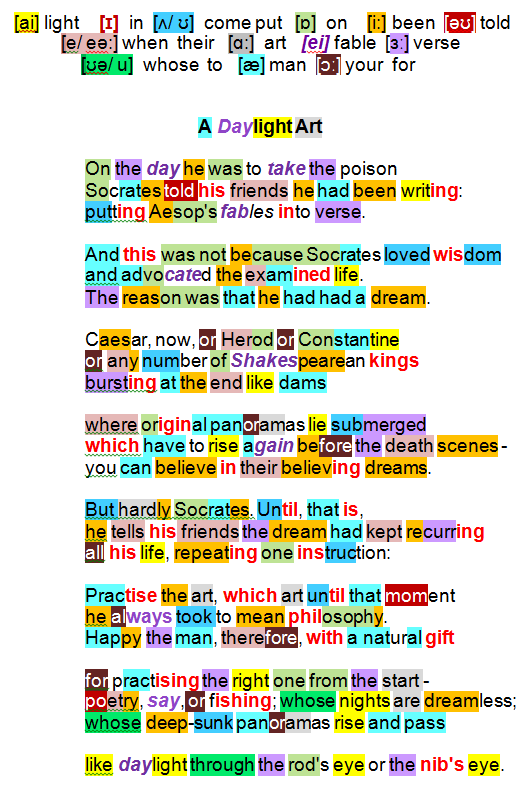