In a collection bristling with self- scrutiny  Incertus, the pen-name Heaney gave himself in his earliest work, never really deserts him. He is sitting in his workroom on the top floor of the family’s Dublin home. His wife’s distracting presence and the ways she arouses him after more than two decades of marriage bring into question his own contribution the steady-as-she-goes course of their relationship.

Initial memories of a night ferry journey that he and Marie have made allegorize the things life throws up: the constant tremors (propellers underwater) the relentless sound (cabins drumming), the unrelenting artificial lighting.

If not a specific journey then ferries, so life,  in general – not always at the front of the mind (unthought-of) yet a fact of life (constant), ‘24/7’ (out there every night) and programmed to follow set itineraries (pondered on their courses).

Marie is within a few feet of him: he would love to share what she is thinking at this instant (I envy your sight) as she focuses on the ferries in the Port of Dublin: at rest (docked), solid lumps (massive) familiar, even phallic (sloped-back funnels).

He can weigh up the broad prospects: expansive (outlook is high) and sweeping (airy) but he picks up a pensive sadness in Marie for Spanish climes perhaps even a distant sister living thereabouts (far Toledo blues). His eye shifts from her to the Spanish memento (alpine thistle) brought home from the Asturias region (Covadonga) and bowing in respect (inclines its jaggy crest).

He reflects on their recent trip to northern Spain (last autumn). The heat and aridity from which the humans suffered (smouldering and parched) provided ideal growing conditions for the plant now on sentry duty on the study wall (spikes that keep vigil overhead) for which his preoccupations with ‘Beowulf’ provide the perfect exemplar: the fearsome monster’s claw severed by the hero (Grendel’s steely talon) displayed as proof that threats to the Geat court had been vanquished (nailed to the mead-hall roof) … the same heroic resolve they showed to overcome the climate ordeal (we broke through) and survive (came through) … standing out  in retrospect (its own reward).

So where has their life’s course brought them, man and wife pursuing a pleasure-seeking, hectic lifestyle (voluptuaries of the morning after) and settled in their comfort zone (gulls cry … deep channels?

How, he wonders, does the effortless unpremeditated way she turns him on (you stand on and on, twiddling your hair) compare with his stolid lack of subtlety in their sexual space (your MacWhirr of the boudoir), him bulldozing on (head on), single-minded (one track) … unskilled in foreplay (ignorant of manoeuvre)! Disarming honesty! 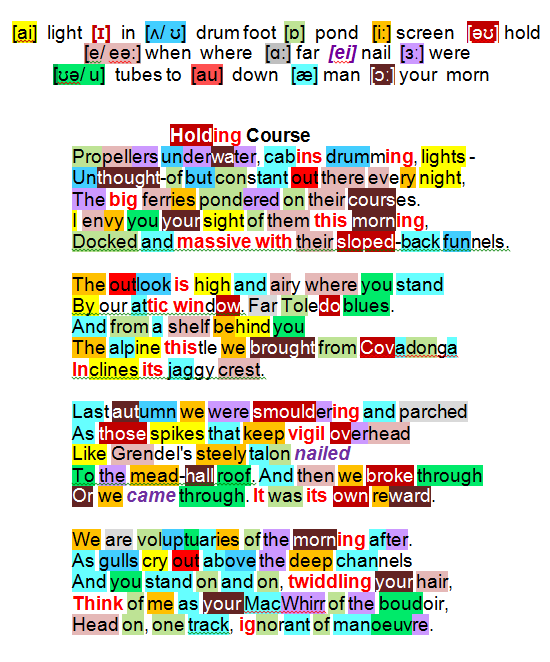