Heaney pursues the anonymity of his parable format but let it be known via his contribution to an Irish Hospice Foundation book published a month after his death in 2013 that The Mud Vision is a poem embedded in memories of life in an older Ireland but it also gestures towards an Ireland that is still coming into being. It has its origins in certain incidents in my personal past and has its meaning in intimations of what seems to be happening in the national psyche, at present and for the future.

The circumstances and triggers that led to the poem, Heaney’s further responses, the thoughts of other commentators and press reports are fascinating. This commentary is followed by a comprehensive Background section below.

The Mud Vision is a dramatic monologue, spoken by a member of a community that has the trappings of modernity but not the spirit of it. I refer to ‘Voice’ rather than ‘Heaney’.

A committed member of the community (we… our) Voice articulates the clash between dated religious iconography and modernity –  old Catholic Ireland with its emblems of devotion (statues with exposed hearts), symbols of martyrdom and  humiliation (barbed-wire crowns) on view in church recesses (alcoves) set against the evidence of modernism: Nature’s wildlife (hares flitted) indifferent to the juggernauts of aviation (beneath the dozing bellies of jets); power movers and shakers (our menu-writers) and anti-establishment protestors (punks with aerosol sprays) in full swing (held their own with the best of them). Instant satellite communications (link-ups) delivered gentle comfort (wafted) into pious Catholic homes (blessings of popes), postmodern transport hubs (heliports) indulged pixie-dust (charmed circle) figures of popular culture (idols on tour) or retrieved accident victims (casualties on their stretchers).

We let it come about, Voice is reproachful, because we were lethargic (sleepwalked) caught between the anxiety of keeping up (panic) and the old established ways (formulae). We put the suitability (screen tested) of traditional practices (first native models) and outlived Irish culture (last of the mummers) to the test.

We grew apart from ourselves (watching …at a distance) – ‘ready’…’steady’ (advantaged … airy … on a springboard) but unable to take the plunge (limbering up because the man cannot dive).

Voice’s principal scene is set in the peaty humid Counties of central Ireland (foggy midlands). He dreams up a semi-religious visitation that fits neatly into the landscape (our mud vision) with the grandeur of Gothic circular stained glass but a rose window of mud born (invented itself) of the waterlogged landscape (out of the glittery damp), a delicately textured (gossamer wheel) design of repeated outgoing circles (concentric with its own hub), and sprayed earthiness (nebulous dirt) reflective of dull light (sullied yet lucent).

Without a shred of surprise Voice tells how folk came to ascribe a religious significance to mud vision, applied it as a symbol of penitence (smudge on their foreheads) in their spiritual uncertainty (prepared for whatever) … how they created places of veneration (vigils) in spots where mud prevailed (around puddled gaps).

Mud ‘church’ decoration followed suit (bulrushes ousted the lilies). Lourdes-like the visitation was seen as a miracle cure for the crippled (rota of invalids came and went) with opportunities for those wanting to cash in on it (beds they could lease) by promoting  a deal with clean-up opportunities (in range of the shower).

Those ‘favoured’ by the mud vision (generation who had seen a sign) were treated to its omnipresence day and night: sepia-tinted condensation (umber dew); spores produced by the dampness (mould in the verbena), first-light (woke …pillow) smells of ploughed, living earth (light furrow-breath).

General witness gossip (all about who had seen it) revealed a blend of awe and joy (fear… touched with a secret pride) that reawakened self-belief (adequate then to our lives).

Surreal mud conditions skewed every aspect: meteorological phenomena (rainbow curved flood-brown); stained water courses (ran like a water-rat’s back); normal life brought to a halt (drivers … switched off to watch). Anything deemed unwelcome (we wished it away) was taken as an examination of personal conscience (we presumed it a test) and ratification of worthiness beyond question (prove us beyond expectation).

How wrong could they have been (folly)!

The mud wheel disappeared as unexpectedly as it came (one day it was gone) a brief bearer (momentary vision) of spiritual expectation (trembling corolla…balanced) replaced by the same Irish dilapidation as before (east gable … starkly a ruin again) overrun by rural flora (dandelions … on the ledges) and the thriving spores of a waterlogged climate (moss that slumbered on through its increase).

The call to bear witness to the mud miracle went viral (cameras raked the site from every angle) with self-styled experts prattling away (post factum jabber) and the whole community (all of us … crowded…tight) waiting expectantly for clarification (the big explanations).  Voice shakes his head at folk’s comedic expectations (just like that).

What the community failed to grasp was that miracles and mud visitations were of the community’s own making (the vision was ours), each a one-off opportunity (our one chance) to credit them for what they were (the incomparable) and push ahead (dive to a future).

They allowed a vision of spiritual heritage (what might have been origin) to sink into press headlines (dissipated in news). To read understanding into mud suffered and washed away (clarified place) brought no benefit (retrieved neither us nor itself) beyond returning them to the secular workaday life (we survived).

If survival was the sole outcome then fine (so say that), says Voice, but let us not be surprised if missed learning opportunities (our chance to be mud-men) restoring self-belief and setting us apart (convinced and estranged) leaves us (figure in our own eyes) as backward and undeveloped as outsiders see us (the eyes of the world). 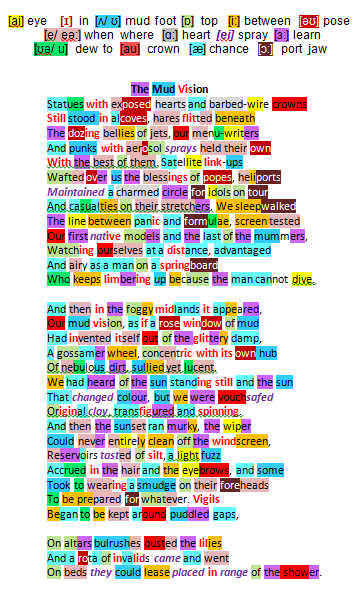 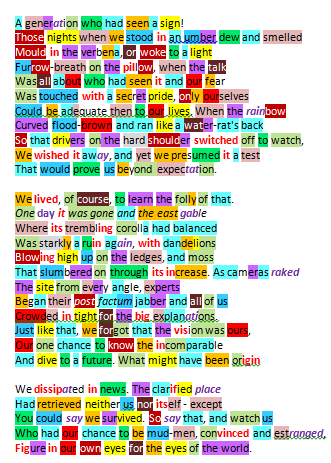 but the actual memory behind it was of thronged roads and gardens around a housing estate in County Tyrone in the late I950s, when the Virgin Mary was supposed to have appeared to a woman in Ardboe … The image that got me going was by the artist Richard Long, a huge circle of muddy handprints that he’d made on a high wall of the Hop Store

Richard Long’s practice involves walking great distances in the wilderness, then pausing to make works referencing natural and cosmic phenomena experienced along the way. He uses walking, therefore, as both medium and measure, and his works act as a direct response to the world in which he lives. This way of working offers the potential to make sculpture anywhere and at any time, free from the constraints that can otherwise arise with producing art. Long leaves a mark or arrangement within an ever-shifting elemental terrain that exerts its own laws of regulation over the end result. This is his way of expressing ideas about time and space, and what it means to be human when removed from the cacophony of contemporary life.

Two experiences from my teenage years get worked into the story obliquely. Fundamental to the whole conception is the memory of the countryside in mid-Ulster in the 1950s – or the Catholic part of it at any rate – being brought alive by reports that the Virgin Mary had appeared to a woman in Ardboe in Co Tyrone, on the shores of Lough Neagh. For a whole summer the byroads around the place and the back garden of the woman’s house were crowded with people excited by the prospect of the apparition happening again. Busloads came from as far away as Cork, young women entered convents, vendors of religious objects set up on the roadside. There was a surge of excitement, a big emotional wave and at the same time an opposite but not equal scepticism – an attitude approved by the clergy … The second experience happened earlier. During a local dramatic society’s production of a play that told the story of another apparition of the Virgin, this time to the three children at Fatima, a lighting effect occurred that was sudden, brilliant and unforgettable. Melodramatic too, representing the sun changing colour, as it was supposed to have changed at Fatima.

In the fiction of the poem, the person who speaks belongs to a community like those around Ardboe and Fatima: religious, rural, superstitious, bewildered by the strangeness of their vision but, at the deepest level, at home with it.

You could say they are people in whom the battle for the modern Irish soul is being fought. To quote something I once wrote about them in another context: ‘They have been sprung from the world of the awestruck gaze, where there was belief in miracle, the sun standing still and the sun changing colour . . . They have entered the world of media-speak and post-modernity. They’ve been displaced from a culture not unlike that of de Valera’s Ireland – frugal, nativist and inward looking, but still tuned to a supernatural dimension; and they find themselves in a universe that is global, desacralised, consumerist ;

The poem ends with an intimation that there has been a loss of faith – not necessarily religious faith, more the people’s faith in themselves. Disappointment is general. Heretofore they had belief and a unique revelation; now they are left with the trappings of modernity in a world they understand but are no longer at home with. Alienated from what has been brought upon them, they “crowd in for the big explanations”, rather like the Irish population in the wake of the Celtic Tiger, listening, bewildered, to experts. Economists. Regulators. Apologisers. Apologists.

On a late August evening in 1954, Teresa Grimes was in her home overlooking the Annaghmore drain when she experienced a vision of the ‘Mother of God’ standing in a bush at the bottom of the garden. The vision was confirmed by several other local women. The news of the event spread quickly through the community and crowds were soon flocking to the drain, praying and singing hymns.

The stance taken by the local clergy, however, was lukewarm. The curate Fr McKeever reminded the parishioners that the Virgin Mary could be worshipped just as effectively in the local church. But a sense of occasion and natural curiosity continued to bring people to Annavore in their droves.The drama that was acted out in and around the little fields surrounding the estate came to a climax on the night of December 8, 1954, the feast of the Immaculate Conception. The crowds that came arrived mainly by bicycle, bus and car. Sixty-two buses were hired to convey people from Ballymena and Belfast and traffic jams were reported on both the Coagh and Magherafelt roads. A plane was apparently chartered to bring Tyrone emigrants home from Scotland. The crowd gathered to hear a special message from the Virgin as promised by Rankin and Hanna. At about 1am it started to rain incessantly and the visionaries fainted. The crowd held its breath but the long awaited message never materialised and the faithful slowly dispersed. Dawn brought muddy fields and trampled gardens, the aftermath of the invasion, and Annavore as a spectacle was finished.