Heaney’s much admired triptych attracted comments from high-flying politician and revered academic alike: Irish President Mary McAleese commented on the educational aspect: ‘Heaney describes the changes wrought when education became available to those whose destiny had been to be second best, and to make a virtue of stoically, even pathetically, putting up with it’; Helen Vendler remarked on the ‘metaphysical parable’ schematic: its three parts – nationalist exhausted optatives, youthful imperatives and the yearning for an indicative – sketch the state of the Northern Catholic population, and its competing discourses, without ever mentioning it by name.

The ‘Canton’ from which Heaney speaks to us is a unit in time and space as big or as small as he wants it to be. ‘Expectation’ works both ways: what situations expected from him and what he expected from them.

In conversation with DOD (133) Heaney set out his feelings as he grew up as a minority Catholic in a society under Protestant dominance  … I suppose there was a certain melancholy attaching to the whole Hibernian (as opposed to the Protestant Orange Order) phenomenon. They belonged to a Victorian ethos, and the movement had no great ideological force or passion to it …  it packed very little factional punch.

The canton of poem I exists in the mid-Ulster corner of Heaney’s childhood world encompassing Mossbawn farm and an annual festival of Gaelic arts and culture at which the Catholic Ancient Order of Hibernians had a role to play.

Heaney encodes the experience of local Catholics (we), implanted (deep) in their home patch via a verb form expressing vague wish and desire (land of optative moods) set against the storm-threatening Protestant background (high, banked clouds) and accompanied by fatalistic acceptance (resignation).

Second class citizenship without prospect of betterment (Not in our lifetime) generated a weak reaction (rustle of loss) amongst a population trained to obedience by the Catholic church (when we prayed Vouchsafe or Deign), faint-hearted as a result (broken nerve), commendable (creditable), enough to be going on with (sufficient to the day).

Heaney recalls the annual Catholic feis (we gathered in a field) with its sense of pageant (dance platforms and tents) at which well-rehearsed youngsters performed (songs… learned by rote) to maintain traditional identity and culture (the old language).

He pictures an underwhelming nationalist speaker – a salesman (auctioneer) said to have been active (fought in the brotherhood) – who rehearsed the litany of injustices heaped on the Catholic community (humiliations) that the onlookers shrugged off as par for the course (took for granted), but made no attempt to excite militancy (call to action).

Aggressive amplification (Iron-mouthed loudspeakers shook the air) that issued no rebuke (nobody felt blamed) was enough to persuade those present that they had done their bit (confirmed us).

Their hymn to St Patrick or Mother Mary  – the closest they got to a protest song (rebel anthem) – marked the end of the proceedings (meeting shut) and exposed them to the Protestant gauntlet (usual harassment) at the hands of Protestant B-specials hounding Catholics more, Heaney suggests, for pecuniary than ideological reasons (militiamen on overtime at roadblocks).

I’d say the blood was stirred in an Orange child by those Orange processions far more than mine ever was by the Hibs, as we called them. ‘Obedient strains like theirs tuned me first / And not that harp of unforgiving iron / The Fenians strung (Station Island II).’

Generational change brought a new grammatical label (change of mood). ‘Let there be light and light appeared’ (books open in the newly-wired kitchen) – domestic electric power on demand had arrived in the Castledawson area when Heaney was a child and following it a raft of new opportunities generated by the 1947 Education Act.

Heaney’s generation of farming youngsters hitherto tied to humdrum existences (dozed a life away) of farming routine (against the flank of milking cows) were now beavering away in educational establishments (busy paving and pencilling) building foundations of literacy and the means to go places (first causeways across the prescribed texts).

Heaney himself was sent to an exclusive exclusive school (paving stones of quadrangles) with rigorous routines dictating what had to be done (grammar of imperative) to reach the next level up (new age of demands).

Heaney watched the mass graduation of young intelligences discarding the soft light of the dozing past for their electrical imperatives (HV124) … a demanding generation  replacing ‘would’ or ‘might’ by ‘want’ and ‘will’ (banish the conditional for ever) … riding roughshod (impervious … anathema) over religious notions that they were sinners putting their trust in the mercies of God (our cries of de profundis) pooh poohing the idea that success only came to those who kept trying (faith in winning by enduring most) – a well-polished ( intelligences brightened) , disputatious breed (unmannerly as crowbars).

Heaney is angry and  tired of a situation in Northern Ireland that has promoted chaos and turmoil and failed to find an agent of change. Enough is enough! The political and sectarian status quo no longer suffices (what looks the strongest has outlived its term). The people deserve better so what is to follow must be born of the grass-roots (from under) and not heaven-dictated.

The Hibernian mind-sets that operated in non-aggressive Catholic neighbourhoods (corroborated) under the protection (aegis) of non-violent St Patrick (our stealthy patron … our guardian angel of passivity) are no longer enough.

Heaney figures the powerful paramilitary presences as a havoc-wreaking Grendel-like monster (fang of menace in my shoulder) and is deeply worried (‘stricken’).  Cap in hand (bareheaded) he stands facing the same ‘banked clouds’ of menace, now doubly threatening (edged more and more with brassy thunderlight).

Heaney’s deep-felt entreaty (yearn) is for an inspirational figure who will come to the aid of Northern Irish in moments of deep division.  He hints at his perfect candidate: the sounds of Thor-like activity (hammerblows); the Norse longboat design (clinkered planks), the hard evidence (uncompromised report) of oar-driven propulsion (thole-pins).

Socrates-like he  pins his hope on finding just a single example (one among us) of what personal or historical heroism might be: undeviating (never swerved), in an honourable position (his instincts told him was right action), unflinching (stood his ground), holding firm in his here-and-now (indicative).

Heaney banks on a new champion who will not be submerged by impending social mayhem (boat will lift when the cloudburst happens). His money is on an emblem of common origins, Celtic not Biblical …  a Thor, not a Noah.

The four poems whose titles begin with the word ‘From’ (‘From the Frontier of Writing’, ‘From the Republic of Conscience’, ‘From the Land of the Unspoken’, ‘From the Canton of Expectation’) in The Haw Lantern could be called … letters in the sense of fictional missives or messages from a foreign correspondent travelling in mysterious and dangerous places (NC147) 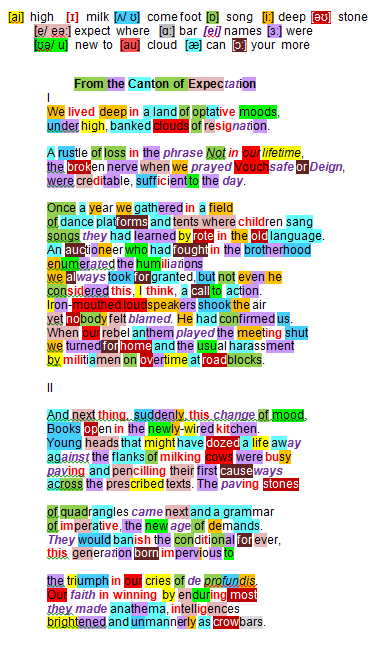 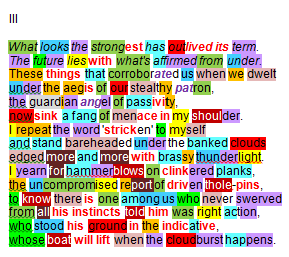 a full breakdown of consonant sounds and where in the mouth they are formed is to be found in the Afterthoughts section;