The story bears similarities to a snippet from the medieval account (traced back to 500 AD) of the ‘Voyage of St Brendan’ later Abbot of Clonfert. Heaney clarified what led to the poem in conversation with DOD (289): I ( ) came to realize that much of what we accepted as natural in our feelings and attitudes was a cultural construction … The second last poem in the book, for example, ‘The Disappearing Island’, is still a form of aisling, a vision poem about Ireland, even though it is an aisling inflected with irony.

The story is told of a particular occasion (once) when a group of missionary sailors with the common quest (we) felt they had discovered St Brendan’s Land of Promise of the Saints, the ideal site on which to build a permanent settlement (found ourselves for good) amidst its earthly blue hills and on its sandless shores where, exhausted, they spent the hours of darkness (desperate night) seeking God’s approval (prayer and vigil).

However no sooner did they set about building a fire (driftwood … hearth), setting up the cooking pot on its tripod (hung our cauldron) in the shape of the wider scale of things (like a firmament) than their ‘island’, a giant sea-creature in the original legend (blue hills/ blue whale?), falls apart under them (broke beneath us like a wave).

Enter the aisling-shift from missionary saint to Irish spokesman indicating just how close the real island of Ireland itself comes to capsizing – an Irish homeland (sustaining us) with its own buoyancy issues (seemed to hold firm), conditional (only) on the sustained devotion (embraced) of all those who come to its aid in moments of dire threat (in extremis).

In an ironic blend of fancy and truth Heaney suggests that Brendan could hardly have known that his myth (all … that happened) would prefigure the whole Irish reality (vision). 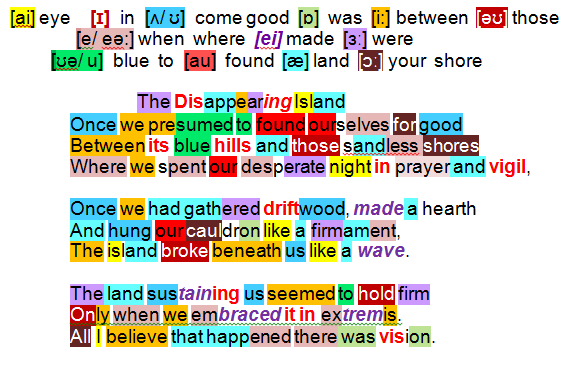