Heaney sets out the tangle of contradictions and demarcations with which his brain was confronted from an early age. The poet tells Neil Corcoran just how confusing he found Mossbawn boundaries following the commentaries below.

The frontman Heaney selects for the title of his triptych is the Roman god of boundaries able to look in both directions, something Heaney feels a poet should aspire to. Perhaps also, as history has recorded, the position reached by Heaney’s earl character in the final couplet was equally a ‘terminus’ point for Irish unification.

The first two parts of the poem set out the doubleness of young Heaney’s experience, conflicting sets of evidence arranged in left-right fashion and organized within the framework of lived experience. Part III focuses on boy Heaney finding his balance.

The first piece is set in a field at Mossbawn. On regular walks around the property (Heaney uses the habitual conditional form would find) the inquisitive youngster poked around (hoked). The items he found spoke of demarcation lines: an emblem of Mother Nature’s thirst for renewal (acorn) alongside discarded evidence of deteriorating railway track that ran alongside the domain (rusted bolt).

When he looked about him he saw local industry in the shape of Clark’s linen works in Castledawson village (factory chimney) and farther afield the volcanic plug (dormant) of Slemish mountain.

Within earshot the Age of Steam re-ordered freight trucks on the railway line (an engine shunting) whilst folk still went past the farm using the transport of yore (trotting horse).

As Heaney developed and times changed, what he initially accepted as ‘that’s-how-it-is’ – the collision between traditional and modern,  man-made and organic, temporary and timeless – was bound to come under heavy scrutiny (second thoughts).

Heaney turns his attention to his training –firstly a fable he was taught (when they spoke) perhaps in a school assembly describing one of the world’s modest creatures (prudent squirrel) instinctively storing food to survive lean times and building a hoard embedded in a different rhetoric: the Catholic Church’s stentorian rejection of individual wealth (mammon of iniquity) that left Heaney with a guilty burning feeling in his pocket (coins … reddened like stove-lids).

So there he was stuck, in a watery no-man’s-land between Mossbawn and the world beyond (the march drain and the march drain’s banks) struggling to evaluate what the influences in his life were contending (suffering the limit of each claim).

Heaney who would become the Incertus of his earliest poetry is the young fellow striving to find his balance amidst conflicting pressures (I grew up in between). He recalls a farmyard practice (two buckets … easier carried than one) that offers a means of weighing one side against the other and selecting his own preferred position.

A scale-pan metaphor serves his purpose; in one pan the orthodox view (standard iron weight) … in the other the tiny personal granule that might suffice to tip (tilt) the balance.

The sheer complexity of actual demarcations converging at Mossbawn (where I was born) conjures up the land divisions and power bases of Tudor occupation (baronies) and those of church control (parishes), leaving him faltering on the central stepping stone.

Heaney’s imagination goes into overdrive: he becomes an important historical player refighting an old battle (last earl on horseback) not prepared to budge (in midstream), still in obstinate negotiation (parleying) so he and his Northern Irish followers (in earshot of his peers) may escape the exile that will snuff out any chance of the Indigenous Irish population expelling the invader. To succeed in reordering history would meet with Milosz’ unreserved approval: ‘What is poetry, he asked, which does not save/ Nations or people?’

In conversation with Neil Corcoran in 1985 : SH From the beginning I was very conscious of boundaries… there was a drain or stream, the Sluggan drain, an old division that ran very close to our house. It divided the townland of Tamniarn from the townland of Anahorish and those two townlands belonged in two different parishes, Bellaghy and Newbridge, which are also in two different dioceses: the diocese of Derry ended at the Sluggan drain and the diocese of Armagh began. I was always going backwards and forwards. I went to school in Anahorish School, so I learnt the Armagh catechism; but I belonged, by birth and enrolment, to Bellaghy parish. So I didn’t go with the rest of the school to make my first communion in Newbridge. And when I was confirmed in Bellaghy, the bishop had to ask us these ritual questions and] didn’t know the Derry catechism. When we moved to the other end of the parish when I was fourteen, I still played football for Castledawson, though I was living in the Bellaghy team’s district. I seemed always to be a little displaced; being in be­tween was a kind of condition, from the start. 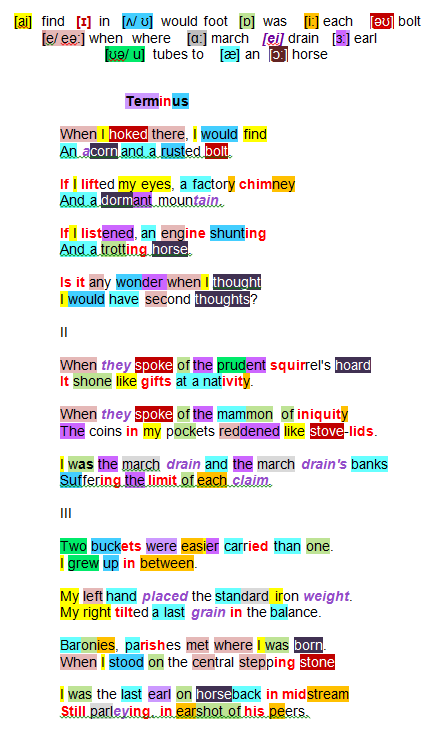