The sets of letters that represent the sounds and glyphs of language as a child first hears it form the basis of its written and reading forms critical both to basic skills and more refined long-term uses.

Learning the alphabet underpins the first stage at school. First language comes from home and school; subsequent ones out of interest or study. Heaney runs us through his range of English, Latin, Irish and Greek from modest Anahorish Primary to the most prestigious lecture theatres in the world.

A child’s earliest memory of shape: the shadow of something familiar (rabbit’s head), projected onto the Mossbawn wall by his father (with joined hands and thumbs and fingers) to entertain his first born, comes to life (nibbles on the wall). The child is also sifting information (he understands) from what that talk about at home – he has a long learning road ahead of him (will understand more when he goes to school).

Skip to the first days at Anahorish Primary : initial play-school drawings on school slate (smoke with chalk the whole first week) are quickly replaced by letters resembling familiar objects- a forked stick linked to shape and sound of Y . Eureka – this is writing!  Introduction of the numeral 2 (swan’s neck and swan’s back) figured and recited (see now as well as say). This way of teaching, Helen Vendler suggests, introduces Heaney to the ‘first stirrings of the metaphorical’

Upper case A resembles what he sees above his head (two rafters and a cross-tie) with its tricky double pronunciation (some call ah– as in ‘can’ – some call ay – as in ‘cane).

Learning aids surround him (charts…headlines) … he is taught to hold his pen properly (right way…wrong way).

Instruction is replaced in his head by a sense of discovery: terminologies change ‘copying out’ becomes ‘English’ (Heaney’s life will be dominated by it!) … his work is checked (a motif of the whole collection), not with a ‘tick’, rather with a sign resembling a farmyard tool (little leaning hoe).

Schoolroom sense data have a 1940s’ feel: smells of inkwells rise; sound, or rather its disciplined absence reflect school ethos (classroom hush); the Geography teaching-aid offering a gateway to the future (globe in the window) is itself alphabetic (like a coloured O).

An exiled Heaney was handed on to surrogate parents (fostered) as an 11-19 boarder at St Columb’s College in Derry, its old religious foundation visible in the school crest (named for the patron saint of the oak wood).

Latin was a great love – classrooms echoing to the rote repetition of nouns and adjectives like hymns of praise (declensions sang on air like a hosanna), classical building blocks (column after stratified column) in his Latin Primer. Each declension nuanced (marbled) and recited to the class from memory (minatory) as part of a threatening routine (stricter school) where everything including lesson times was centrally controlled (switched to the pealing of a bell).

His Latin studies (forum) were replaced by a new calligraphy – the language of Irishness (felt like home) – its written forms (letters … capitals … lines of script) like a mid-Ulster Mother Nature’s illuminated manuscript (trees… orchards in full bloom… briars coiled in ditches).

Emanating from it an aisling vision of old Ireland (snooded garment and bare feet) in complete harmony with the sounds of the irish language (ringleted in assonance and wood notes), a woman longed for (poet’s dream) someone out-of-this-world, be it a fairy sidhe or a Marie Devlin, to take him over (stole over him like sunlight) with the promise of physical fulfilment (passed into the tenebrous thickets).

His desire to become a poet provides a further ‘alphabet’ to master (he learns this other writing) – akin to a scribe from a Dark Ages’ monastery he links the effort and skill of the Irish farmer ploughing his land with the virgin vellums the monk faced (drove a team of quills on his white field) … isolated like him from the busy world outside (round his cell door the blackbirds dart and dab) … sharing mutual doubt and privation (self-denial, fasting, the pure cold).

Heaney adds his own stamp recalling the austerity of the early days (rules that hardened the farther they reached north), his routine dissatisfaction with first efforts (bends to his desk and begins again), the Catholic instilled guilt of falling short (Christ’s sickle has been in the undergrowth), the drying up of inspiration (script grows bare), the disharmony between self and message (Merovingian).

Heaney’s Anahorish schoolroom has been torn down (bulldozed) including the window where the original globe of aspiration was sighted.

Both traditional farming practices and time-consuming handwriting in single text have been replaced by mechanised reprography (balers drop bales like printouts). Every memory is envisioned in Greek –the lambda  λ of stooked sheaves … on the stubble once at harvest and the  Δ shape of potato trenches (delta face of each … pit), so carefully designed by farmworker and poet (patted straight) and built to resist adversity (moulded against frost).

That world of yore is All gone its visual alphabet drained to the last letter, the Ω  omega-shaped  horse-shoe traditionally nailed over doors to bring good luck to those within.

The Irish language has sustained Heaney’s morale – shape-note language – the sounding board of utter Irishness (absolute on air), as huge to him as the message that changed the whole religious scene of the Graeco-Roman world (Constantine’s sky-lettered IN HOC SIGNO), a Gaelic tongue with clout (can still command him).

He knows of a late mediaeval ‘scientist’ seeking alignment between the individual life and the greater scheme of things: earth-bound necromancer Marsilio Ficino recreating a ‘universe’ beneath the vaults of his Renaissance dwelling (domed ceiling) with suspended globe and mobile of a solar system in which, he hoped, everything had its place (‘not just single things’) as he lived his own  life out (walked abroad).

The poem builds to once unimagined images of Man in orbit, staring, from his ‘cell’-like view-point (small window), his origins in the face (all he has sprung from) – the photograph from space that changed the way we see the Earth, itself in orbit (risen), predominantly ocean (aqueous), unique and remarkable (singular), bathed in the sun’s rays (lucent) – its O shape the triumphant (magnified and buoyant) first sound of the female reproductive cell (ovum) in which every human embryo was formed.

‘O’ heard finally in the locative ‘oh’ of the child we met in the very first quatrain, naïve and open- mouthed (my Own wide pre-reflective stare), mesmerised (all agog) by the tradesman rendering the Mossbawn wall (skimming our gable) and inscribing into the hardening plaster our name there as a record (letter by strange letter). Each and every poem the adult Heaney would one day write would be its own equivalent memorial. 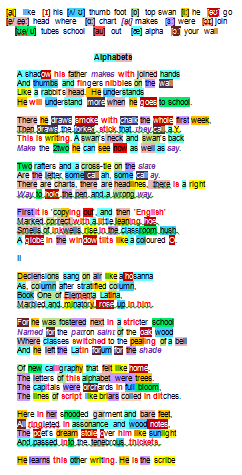 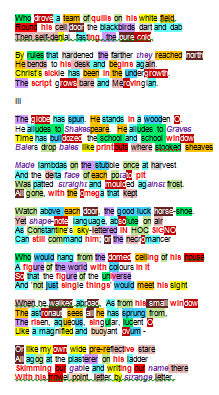