For all the title’s alignment of ‘Island’ and ‘Ireland’ Heaney presents his four-piece sequence of 1985 as a fictional place in which he is a silent listener. The clues he feeds into the narrative reveal, however, that he is on home ground.

Helen Vendler’s view that the importance of these poems of competing discourses lies in the poet’s conviction that the person who owns the language owns the story, and that he who wishes to change the story must first change the language (HV125) is at the very source.

Parable Island regrets the seeming impossibility of what Heaney yearns for in his every sinew: he senses that from the way they communicate with each other the Irish themselves have placed his notion of integrated nationhood beyond reach.

Parable island is a divided place: non-Irish invaders (occupied nation) and much more recent trade-offs brought about by sectarian confrontation (their only border is an inland one) have blocked geographical unity. The wagging finger of his concessive ‘although’ warns, however, that the Irish race is, as one, emotionally uncompromising (yield to nobody) in its belief of undivided Irishness (the country is an island).

Heaney homes in on the northern sector with the precision of a satellite zoom … from somewhere in the far north to a region with a popular label (‘the coast’), then via a geological clue  to Co Antrim’s North Coast (Cape Basalt) coming finally to rest on breast-shaped Aird Snout overlooking the Giant’s Causeway itself.

Enter language: the feature bears other labels: known to generations of local farmers in the east as the Sun’s Headstone (after all the sun sinks behind it at the end of each day) and, because of its breast-like shape, given a vulgar nicknamed by incomers (Orphan’s Tit).

Political division has led to cultural distancing: local attitudes are ‘uncharted’ (no map) – remaining alert to language is paramount (keep listening) – the traveller will sense if he is accepted or acceptable on either the one or the other side of the frontier (the line he knows he must have crossed). In the later ‘Wolfe Tone’ poem not listening is precisely what brings the man down.

Heaney can see the impasse: the Irish say one thing and believe another (forked-tongued natives), half believing the superstitious promise (prophecies they pretend not to believe) of some legendary cavern where a common language lies dormant (all the names converge) in which, who knows (some day), his countrymen may come to recognise the richness of shared heritage (start to mine the ore of truth).

Heaney reflects on images of the earliest Celts (In the beginning) and the uncanny ‘parable island‘ resemblances with what has followed. The piece hints at control and controlled, not least Church and people.

Such were the words of those historical incomers tasked both with converting paganism and copying manuscripts – missionary scribes describing a limited indigenous population sprung from the land where it evolved (autochthonous tradition).

Heaney cannot escape the sense (you can’t be sure) that the imposition of power and influence involved some distortion of the past (stylised): things staring into the soul (eye-shapes); the elbow-jogging  reminders(recurrent glosses) of propagandist spin (old revisionists) betraying their lack of depth by their spurious derivations (the word island from roots in eye and land).

Three triplets dwell on the uses to which language can be put either simple concrete/ abstract interpretation or the more insidious means by which power mongers, political, religious or both, justify their ends.

Language can be manipulated to fit the circumstances (gloss the glosses): Irish archaeological features of pre-history (stone circles) are variously defined (according to who you are) as an abstract figure of speech (pure symbol) or something real, historical and community based (assembly spots or hut foundations); a second remnant (post-hole in an ancient floor) is regarded by some as a visual metaphor (pupil in an iris) and by others, materially, as plotting the layout of a former structure (a post-hole). Not in these cases such a big deal, suggests the poet (and so on).

Suddenly Heaney ups the ante, turning his venom on those who appropriate language to disturb the social balance (subversives) or sell their souls (collaborators) to individuals grappling with each other (vying with a fierce possessiveness) by claiming they alone are best qualified to impose their version of the truth (the right to set ‘the island story’ straight).

Irish jokes are brilliant at exposing absurdity and Heaney finds a tale that turns geriatric ramblings and entrenched opinion (elders dreaming of boat journeys and havens) into parody.

He tells the one about the backward comic ‘feller’ who fell ill (took to his bed) and died still clinging to his opposition to the cutting of the Panama Canal on the grounds that the waters of the Atlantic would drain away into the Pacific! Were that possible it would leave behind a preposterous paradox, says the poet – little Ireland enhanced since it is now part of a huge muddy land mass (island disappear by aggrandizement). Fade out to sounds of mirth!

Beyond parable it seems worth adding that he conflict between the largely Catholic nationalists fighting for a united Ireland and the largely protestant unionists in Northern Ireland has boiled up repeatedly over time without ever being settled. Most recently Irish and British governments signed up to the 1998 Belfast Agreement which stated that the status of Northern would not change without the consent of the majority of its population thereby ensuring that  dreams of religious, cultural and traditional alignment remain distant. 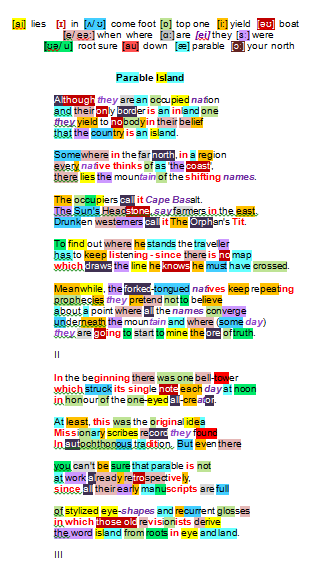 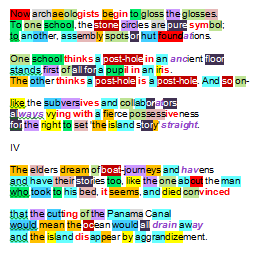