An anonymous first person ‘I’, let us call him Traveller, journeys wittingly to a place with a mysterious name. Traveller is an individual normally caught up in a maelstrom of activity, sensitive to Nature surrounding him and family-minded.

Heaney accepted that the poem was set in a remote island off the north-east coast of Scotland: I imagined the Republic of Conscience as a place of silence and solitude where a person would find it hard to avoid self-awareness and self-examination, which is what made me think of Orkney (DOD292);

The airplane carrying Traveller has arrived at its scheduled destination – an allegorical somewhere bearing an unusual name (republic of conscience). Traveller is met with conducive silence (noiseless when the engines stopped) that includes a reassuringly familiar sound (curlew high above the runway).

No uniforms or guns to greet him at this border, nor autocratic staff; the official who met him was a gentle character (the clerk was an old man). Traveller was not required to prove his identity – the old man knew of him in advance (wallet from his homespun coat) welcoming him as a member of the human family (a photograph of my grandfather).

The woman on duty was interested less in scrutiny of Traveller’s luggage than hearing what he had to say … the narrative he brought with him (traditional cures and charms) for endorsing freedom of speech (heal dumbness) and resisting oppressive regimes (avert the evil eye).

The republic of conscience was quickly recognised as a place for scrutiny of the self (No porters), for untrammelled expression (No interpreter) for an individual journey of the soul (No taxi). Traveller is having to expose his past baggage to self-scrutiny (your own burden) without let or hindrance (symptom of creeping privilege disappeared).

Traveller learns quickly that the republic of conscience is made up of diverse phenomena and superstition each worthy of investigation: Orkney-like fog either masker of the way ahead or deliberate screen to blur peoples’ vision is a dreaded omen; lightning is reputed a good omen dispelling the darkness (spells universal good) yet leads to risky superstitious practices amongst civilisations that suspended swaddled infants in trees during thunderstorms to turn them into honest individuals.

Salt is lauded as a precious mineral critical in small quantities to human health. To oceanic communities seashells, the great amplifiers of sound and eternity, were celebrated as rites and rights of passage (held to the ear during births and funerals).

What indeed would freedom of speech have become without salt (base of all inks and pigments is seawater) that enabled hieroglyphic representation (their sacred symbol) shaped into a vehicle of free expression – a figurative craft (stylized boat), a collector of messages (sail … an ear), a nib poised to compose responses (mast a sloping pen), a published ‘voice’ (hull a mouth-shape) reporting vigilantly on all appropriate matters (keel an open eye).

Traveller promotes a tick-list of critical ‘musts’ for public leaders: a transparent public investiture (inauguration) … an oath (swear) against which performance may be judged … a commitment not to replace custom and practice by diktat (uphold unwritten law) … a personality test in which naked political ambition is replaced by open humility (weep) at being considered worthy of selection (atone for their presumption to hold office).

Finally Heaney throws in a killer condition that disqualifies organised Churches: the leader of his republic of conscience will embrace an atheist creation theory  recognizing that the earliest humans and animals were produced by an evolutionary process deriving from some distant African salt-pan (affirm their faith that all life sprang from salt). He links it figuratively to the grief of the classical deity (tears which the sky-god wept) who yearned to be close to human existence rather than some numinous invisible supremo (dreamt his solitude was endless).

His stay completed and his inner balance restored (my two arms the one length) Traveller sets out on the journey home affected by the worthiness he has found (frugal republic).

The woman checking his baggage nods approval: the gains he is taking through customs are duty-free (my allowance was myself). That he and the controller can look each other in the eye (the old man rose and gazed into my face) is corroboration that he has passed the test (official recognition) and now bears international qualification (dual citizen).

Traveller accepts the on-going responsibility (consider myself a representative) of making his voice heard on behalf of the republic of conscience using his own unfettered language (my own tongue).

His public voice is especially needed when the organs of individual states (embassies) never speak with a united voice (were everywhere but operated independently) and official spokespersons are obliged to keep the official line (no ambassador would ever be relieved).

Background: In August 2013 Colm O’Gorman, then Executive Director of Amnesty International Ireland recalled the commission that resulted in The Republic of Conscience: In 1985 Mary Lawlor, then the chairperson of a local Amnesty International group in Dublin who would go on to become Executive Director, approached Seamus and asked him to write a piece to mark International Human Rights Day. Mary gave Seamus a dossier filled with the stories of Prisoners of Conscience, women and men who had suffered torture, imprisonment and silence, the kind of women and men on whose behalf our movement has worked for the past fifty-two years.

Heaney responded to DOD (290): Amnesty had sent me some reports about the injustice and suffering endured by prisoners of conscience in different parts of the world and all I could do at first was quail before that evidence. No cry I could have made in verse could have matched what was crying out in the dossiers. 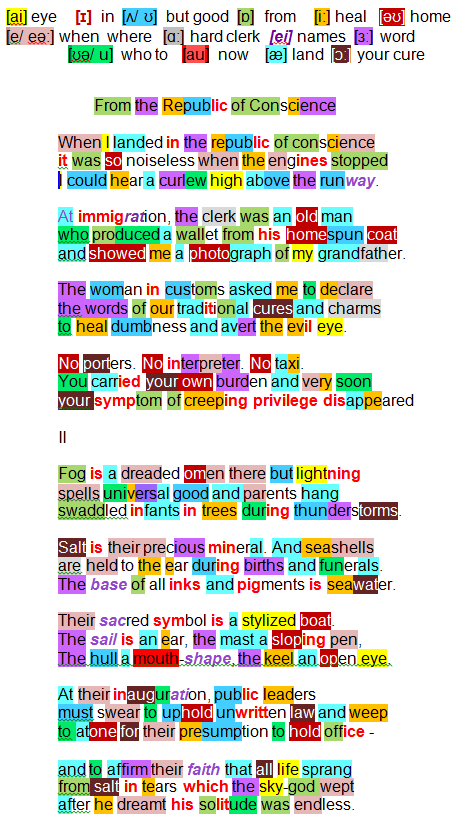 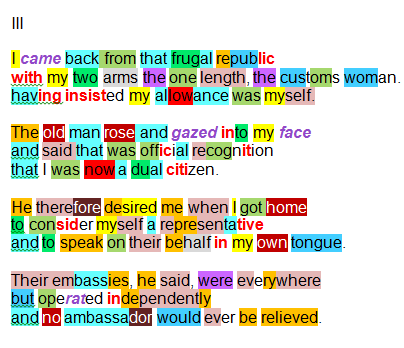