Heaney composes a love poem to Marie years after they visited Hadrian’s Wall in England’s Northumberland. His particular interest in the architectural remnants and artefacts of Roman presence uncovered a two-thousand year old story bristling with poetic and emotional charge. Water is very much the unifying factor.

‘Exile’ reaches further than the poem: Heaney fulfilled a series of part-year contracts at Harvard in the USA that took him away from wife, home and family for prolonged periods.

Heaney weaves the tale of a legionary soldier living at the northern limit of the vast Roman Empire (far from home) whose pain of exile and loneliness drove him to construct a sanctuary dedicated to a Romano-Celtic water goddess (altar to Coventina). Stylised inscriptions visible on the site are as Heaney witnessed them (in her right hand a waterweed … in her left a pitcher spilling out a river).

Reminders of the soggy conditions around Hadrian’s Wall (running water) that suited Grotus (he felt at home) plus his identity carved into her memorial (the stone where he cut his name) were enough to reduce the battle-toughened Mediterranean legionary (some dried-up course beneath his breastbone) to tears of despondency (pouring and darkening).

Mmm … thinks Heaney … in matters of devotion and emotional staying power, Grotus, you and I have things in common. Crude though your mucky old sanctuary (stunted altar) might be it is enough to stir a poet’s creative juices (works on me)!

The love poem that results unfolds around an early-days, wet-behind-the-ears episode in Glanmore – the cottage’s underground supply of fresh water was suddenly cut (our electric pump gave out). His and Marie’s efforts to revive it were amateur (priming it with bucketfuls) and increasingly frustrated (our idiotic rage) – finally came shame-faced appeals (hangdog phone-calls … please) to their rural neighbours (farm next door).

The sound of the pump bursting back to life (hammer on again) brought exultant cheers (jubilation); drips and dribbles were consigned to the past (the tap’s full force), replaced by the genuine article (sheer given fact of water).

Heaney’s feelings for the woman he loves are triggered by her almost childlike guilty resolve henceforth to conserve water (never waste one drop), never again to take it for granted (its worth better always).

Heaney confirms his marriage vows: his and Marie’s rightness for each other merits a re-discovery of their temps perdu – ‘ let’s go back, Marie Heaney and do it all again (run through all that one more time) … I have just the roles for us’ (I’ll be Grotus, you be Coventina).

Heaney commented to DOD (294)  In a museum on the Wall, I saw a couple of images of this lovely little creature, recumbent on her elbow; under the other elbow, she had a pitcher that poured out a steady stream of water … I visited her shrine. This was only a couple of hundred yards from the Wall itself, in the soggy, rushy corner of a field that could have been the corner of a field at home, one of those mucky old sanctuaries down overgrown lanes, far from the road and the house. Back in the museum, I saw what the display card called an ‘altar’ dedicated to Coventina by one of the legionaries – a little stunted brickbat of a thing, with the name ‘Grotus’ cut into it in very crude letters. … it was a ‘votive object’, but it was also like a girl’s name cut into a desk or written on a wall. 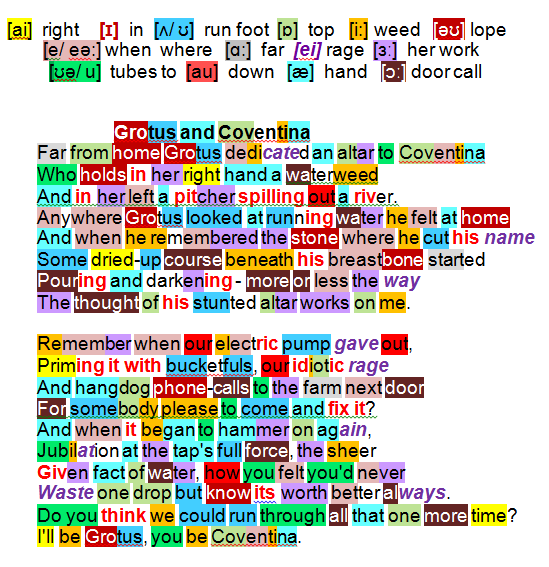