Spurred by his wife Heaney extemporized the poem (dated 1972) on the day his and Marie Heaney’s niece Daisy Garnett was christened. The child was the middle daughter of Marie’s sister Polly Devlin and her well-connected old-Etonian husband Andrew Garnett living in their stately home in Gloucestershire, England.

Polly Devlin describes it as ‘profound and delicate, strong and sub-texted, glowing with observation and truth’ (Writing Home).

The circumstances might actually have presented Heaney with moments of unease hidden in his carefully worded narrative: he is in a stately home that would have held different connotations back in Ireland not least for a modest farmer’s boy like himself. He knows the Devlin family very well (so must be careful to govern his tongue); he barely knows Daisy’s father. Heaney is a lapsed Catholic (and he will be careful to govern his tongue) – it is known that Garnett converted to Catholicism prior to or maybe even as a pre-condition of his marriage to Polly Devlin.

The poem starts with a significant religious event and ends with a very secular alternative.

Seamus and Marie Heaney attended the week-old baby’s baptism (water fell to christen you). The poet’s fingers are crossed that for this baby who would be raised as a Catholic baptismal expectations would be met (work its spell), that new start would erase anything that came before (wipe your slate) and match Seamus’ and Marie’s optimism (we hope, for good).

When all religious pomp and circumstance was said and done the baby retained its three basic needs (sleep, food and the reassuring contact of her mother’s touch of love) – plus, of course, the identity she now carries (Daisy, Daisy, English niece).

Heaney’s eye settles on his Cotswold surroundings: the manicured estate of a well-connected English father with its lyrical appeal (wooded and misty to my eye) and the contrast between mother Polly’s County Tyrone landscape and the child’s present and future prospects amidst grounds of fruitful mellowness, features of stately English standing (topiary, lawn and brick), in private ownership (possessed), sealed against outsiders (untrespassed, walled) and reminiscent of the kind of house one might find in the Irish countryside behind high walls (nostalgic).

Heaney the modest country boy teeters on the edge of his comfort zone (scraggy farm and moss) from somewhere more higgledy-piggledy (old patchworks), left bedraggled (left dishevelled) by centuries of upheaval (pitch and toss of history).

He would like the baby to know (for your sake) that he has made a special effort for the occasion, refining his rough rural Irish twang and manner (levelled my cart-track voice) to befit this upmarket setting (garden tones) and refurbishing his mid Ulster peat-digging setting (cobbled the bog) with exclusive local materials (Cotswold stones).

He reflects on chance and genealogy (ravelling strands of families) – the randomness of couples meeting (mesh in love-knots of two minds) and the outcome of mating (one flesh).

How things turn out for Daisy will be out of her hands (future’s not our own) but the two families will set out to get things right (weave an in-law maze), cordial (we’ll nod and wave) and principled if not bosom (trust but little intimacy).

‘Daisy’, he says, ‘here is my message of affection (billet-doux) recording time, place, ceremony, and early signs of your nature- smiling’. He tells her where and when he sat composing it – overlooking the scene he has described (west window) sensitive both to his writerly purpose and to the inferences that might be drawn from clumsy wording (self-consciously), late in the day (gathering dark) and feeling a touch of home-sickness (Coole Park).

Poised to leave the set of Daisy’s comfortable beginnings (your ordered home) Heaney offers her a prayer – his hope for rich yields (tilth and loam) from a bloodmix  (darkened with Celts’ and Saxons’ blood) that he hopes will foster (breastfeed) the baby’s appreciation of heritage (love of house and wood).

Not destined, perhaps, to be more than a ship in the night (as I pass) Heaney leaves Daisy a double keepsake: his poem, and his very secular good luck symbol discarded by an Indian bird fashionable in many English stately homes (peacock’s feather on the grass).

Polly Devlin was given away by Seamus Heaney at her marriage to Andrew Garnett in 1967. In her ‘Writing Home’ she described the circumstances of the Daisy poem: My sister Marie and her husband Seamus Heaney had just arrived from one of their many trips abroad and Marie was worried they hadn’t had time to get Daisy a christening present. ‘Go you and write a poem,’ she said to Seamus … he went upstairs and began the poem and half way through writing it we all went for a walk … and we came upon a fallen peacock’s feather. Seamus went back and finished the poem immediately … He was shy enough about it – his modesty was part of his character. 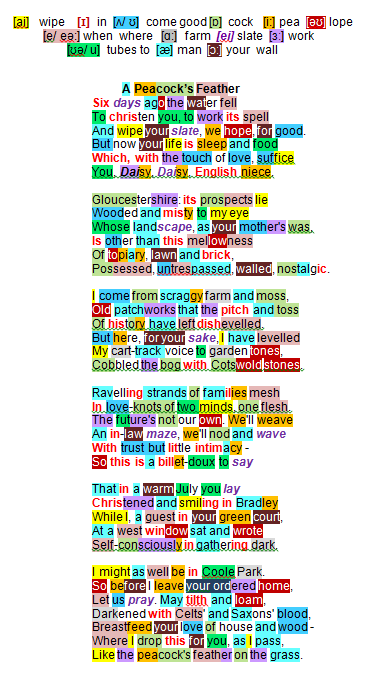