Heaney presents a short section from his much admired ‘Beowulf’, the anonymous epic of the first millennium written in Anglo-Saxon/ Old English which he is translating over time and will publish in its entirety in 1999. The poet remains faithful to the original text using his creative talent and rich store of vocabulary to create a version that is both intellectually competent and pleasing to the ear.

Scyld was still a strong man when his time came

and he crossed over into Our Lord’s keeping.

His warrior band did what he bade them

when he laid down the law among the Danes:

they shouldered him out to the sea’s flood,

the chief they revered who had long ruled them.

A ring-necked prow rode in the harbour,

clad with ice, its cables tightening.

They stretched their beloved lord in the boat,

laid out amidships by the mast

were piled upon him, and precious gear.

I never heard before of a ship so well furbished

and coats of mail. The treasure was massed

on top of him: it would travel far

on out into the sway of ocean.

They decked his body no less bountifully

with offerings than those first ones did

who cast him away when he was a child

and launched him out alone over the waves.

And they set a gold standard up

high above his head and let him drift

to wind and tide, bewailing him

and mourning their loss. No man can tell,

no wise man in the hall or weathered veteran

knows for certain who salvaged that load. 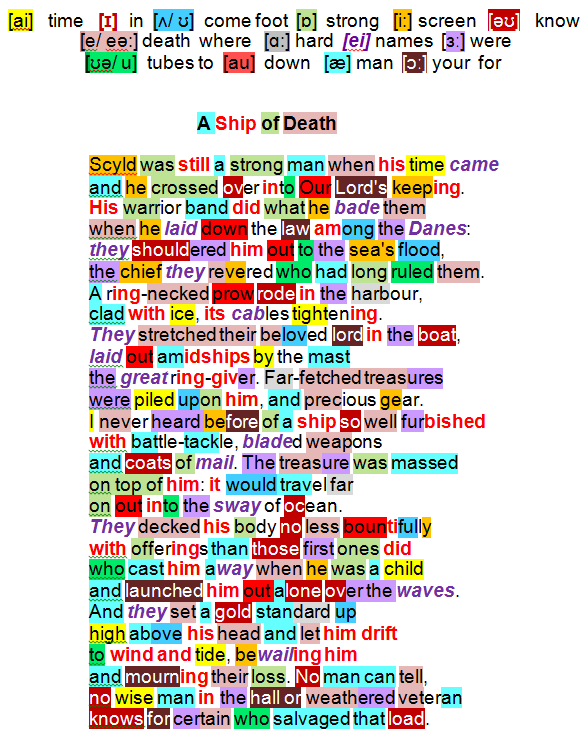