As part of what Heaney called a ‘surfeit’ of Catholic training as a youngster the Catechism sought to teach him that the human soul is immortal. Though he is lapsed Heaney’s faith still resonates, sometimes testingly. His metaphysical parable asks whether the immortality of the soul is dependent on faith. Using an extended fishing metaphor Heaney resists the temptation to re-engage.

Grappling with his faith brings the need for fresh comparison (a new similitude is given us).

Heaney couches his attempt to find a tangible material equivalent of a metaphysical notion (soul) in archaic Old Testament language (compared unto) building the narrative round something he caught unexpected sight of as a school-age youngster: a fishing accessory (spoonbait) that a classmate had brought to school (beneath the sliding lid of a pencil case) – a briefly spotted item (glimpsed) recovered now from his long-term memory hoard (imagined for a lifetime) as a word with just the right connotation (bait) for his current riddle.

He becomes the fish that someone would like to hook: a spoonbait lure has suddenly sploshed into his underwater mind’s eye, projected by a fishing cast (risen and free), totally unexpectedly (spooling out of nowhere), an enticing splash of light (shooting star) being reeled enticingly away from him (back up the darkness).

Just as the compacted icy ball of the ‘Hailstones’ poem melted to nothing, the current temptation is having a similar double effect: transient (flees him), leaving him and his conscience raw (burns him).

Heaney’s inner struggle has identified two potential post mortem outcomes the first based on the story of the ‘rich man’ (Dives) whose behaviour towards Lazarus (Luke 16) in his earthly existence condemned the rich man to hell and who, hell-bound (falling and falling into a great gulf), asked in vain for Lazarus to be sent down to cool his tongue with a drop of water (the single drop that Dives implored).

Set against this, the legendary saga king leaving the mortal stage (then exit) was launched towards some distant horizon amidst the earthly symbols of his existence (polished helmet of a hero laid out amidships) on a boat shouldered by the waves (scudding water) … the fate of a top-of-the-range poet surrounded by his oeuvre on his last journey?

So …  Heaney has a pre-exit choice: should he swallow the spoonbait lure (toy of light) and allow himself to be reeled in against the current (upstream) by some Higher Authority ? …  ‘No way’, says Heaney, ‘this particular fish is not for being hooked’ (through him … snagging on nothing).

In response to a comment from Dennis O’Driscoll about the ‘underlife or otherlife of religious devotion Heaney had known from childhood’ Heaney referred him to one of the main concerns of the book: call it loss of faith – or rather loss of faiths, of all kinds …  religious faith, as in ‘The Mud Vision’ or in the one called ‘The Spoonbait’ (DOD287). 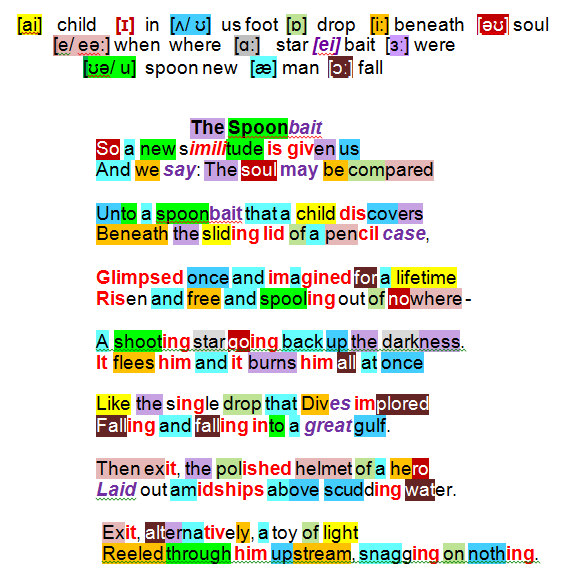