Heaney pictures a massive piece of Irish furniture that came to live and belong in Glanmore Cottage.  The inherited gift smacked of Ulster’s past and is used as a metaphor for shared heritage and a better future.

The settle bed came as a bequest (willed down), known in advance (waited for), eventually installed (in place at last) and permanent (for good). Its properties reveal its character and style: foldable and hinged (trunk-hasped); weighing a ton (cart-heavy); crudely decorated (painted an ignorant brown); as narrow as church seating (pew-strait); cavernous (bin-deep); all in all, a hallowed object (standing four-square as an ark).

To lie in it was to be encoffined (cribbed in seasoned deal), waiting like a Viking hero for cremation (dry as the unkindled boards of a funeral ship); perfect for Heaney’s frame (my measure … taken); sound-proofed (my ear shuttered up).

The settle bed represents an old sombre tide of continuity awash in the headboard: proud Ulsterisms (unpathetic och ochs … och hohs); the rousing songs that kept folk up (long bedtime anthems); a defiant Ulster not prepared to kowtow to British rule (unwilling, unbeaten), tolerance within the Catholic Heaney family (the Bible, the beads); neighbourly communications (long talks at gables by moonlight), conviviality (boots on the hearth) … even all night sessions (small hours chimed sweetly away) overtaken by daybreak (cock on the ridge-tiles).

Rooted in Heaney’s consciousness, the bed proclaims the values of old Ireland (planked in the long ago): honest (upright); uncomplicated (rudimentary); immovable (unshiftably planked); a ‘relic’ to be handed on (willable forward); standing for all that it is unsophisticated dumb, tongue-and-groove worthiness; in the way (un-get-roundable weight).

A settle bed with the potential to reconcile differences (conquer that weight) – not intimidating, rather a light and airborne gift from above (dower) urging escape from the tit-for-tat of violence (nonsensical vengeance), one of a shower of settle beds (harmless barrage).

Heaney claims his entitlement as a poet (whatever is given can always be reimagined) to figure the settle bed as an agent of reconciliation if he wishes, however limited (four-square), backward (Plank-thick, hull-stupid) or outmoded it may seem.

Why not imagine a different, better reality (You are free as a lookout)?  He weaves the hope into an example of Irish humour: an old tale says that, from his crow’s nest post high over the fog, a far-seeing joker declared in all seriousness that the Ireland he found when he clambered down again bore no resemblance to the one he remembered before he shinned up: the actual ship had been stolen away from beneath him.

The crewman in the Clonmacnoise legend of Lightenigs viii will have a similar tale to tell his crewmates in the floating boat. 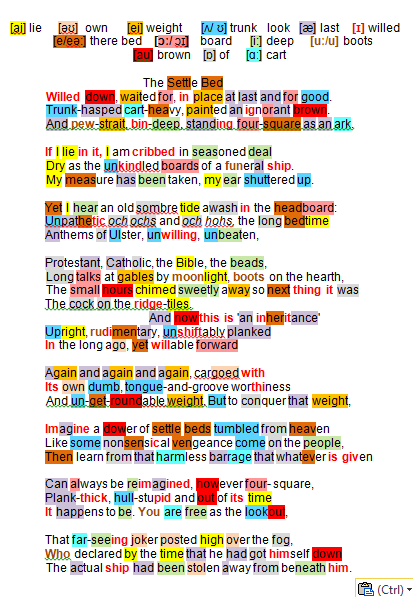