An elegy in sonnet form commemorating an emblem of his Primary School days – a cherished personal possession and  a thing of quality: My handsewn leather schoolbag.

Heaney builds in a tribute to a cultured Irish friend and a poignant reference to his mother and father. He addresses Hewitt not by name but by respected status (poet) at the age of forty, in mid-career, as  Dante put it in the opening line of the Inferno (you were nel mezzo del cammin) .

At that  moment Heaney was a pupil at Anahorish Primary School toting the schoolbag back and forth (shouldered it) with its contents (blue-lined jotters). Images of the school room leap out: arithmetical charts; nature study (the displayed bean); a wall map  spurting with maritime routes (spray of shipping lanes) in curved arcs across the blue North Channel.

In front of the school the neglected Ulster rural road to home: in the middle …  Ox-eye daisies and wild dandelions.

Heaney concurs with the Chinese proverb, Learning’s easy carried. however full it was with things to be learnt the bag is light, carrying the marks of use (scuffed), a pliant (supple) repository of almost magical capacity: unemptiable as an itinerant school conjuror’s hat.

Time to credit the schoolbag, he tells himself, as a symbol of poet-producing scholarship (take it for a word-hoard), as the generous gift (handsel) of loving parents. Picture yourself then, a neatly turned-out youngster (as you step out trig), turning and waving (look back all at once) as you shouldered the schoolbag on that first step towards successful independence (a child on his first morning leaving parents).

Both parents have since died and left Heaney ‘unroofed’; the depth of his feeling is palpable. 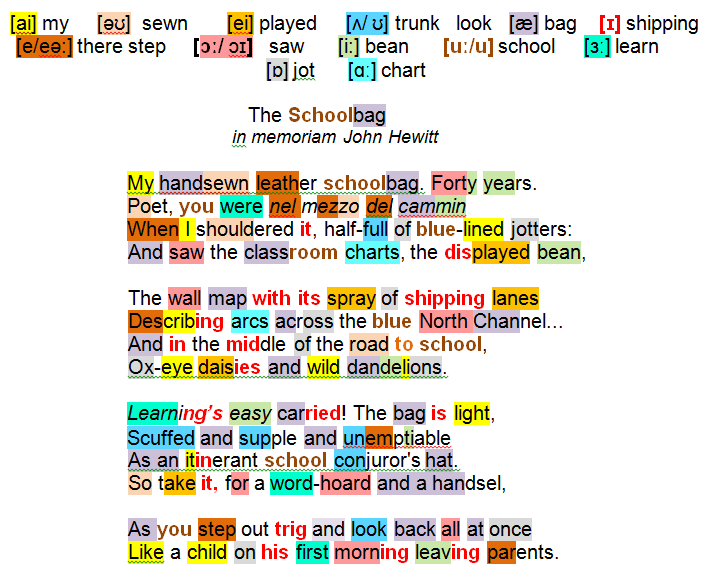