The hat worn by a priest in an  Irish Victorian painting provides Heaney with poetic charge; he compares the biretta he views in an art gallery with others he has seen or handled as an altar boy in his local church.

Heaney presents the biretta‘s shape via the august opening lines of Caesar’s record of the Gallic war (Like Gaul … divided Into three parts). Its sombre confection (black serge) and its pillbox form bring river associations (triple-finned … shipshape). Heaney confesses hewas intimately familiar with every slope and edge of this emblem of the Catholic church itself, neatly presented (trimly articulated) and resolute (decided).

Its plush crimped satin interior and serious weight (heavy too) seemed at odds with its embellishment (sported) – a decorative light flossy tassel whether tickling his fingers or used as a corrective if he was doing something wrong (the backs of my fingers remember well). He recalls the imprint it left on the celebrant (dark red line on the priest’s brow).

As a serving altar-boy he was handed the biretta prior to the thin fastidious movement that traced  the up and out and in sign of the cross as the celebrant delivered Mass; the priest’s stern intonation is emphasised in the text (name of the Father and of the Son AND of the Holy Ghost).

Bored, the boy imagines the biretta as a kindred spirit, both of them just putting up with it (batten down), slightly averse (half-resist) to the goings-on (chalice drunk off … patted lips).

He recalls his first-time shock when a religious fanatic leapt to his feet (an El Greco ascetic rose before me) thunderously controlling (shout … preaching hellfire) …  a wrinkled, lizard-like saurian, fiery (stormy) zealot hammering home his message: Adze-head on the rampage.

Each celebrant wore the biretta differently: some flat (squashed) others not (clean and tall): whichever way, a remnant of a former time (antique as armour in a hall) that, sure as heck, scared everyone to death (put the wind up me and my generation).

Heaney re-works with the boat associations of the orginal canvas – as the frail paper craft of Dante’s poetic imagination in the Purgatorio, celebrated in verse (poetry lifts its eyes and clears its throat); as the intricate artifact found in Derry and kept in the National Museum (small boat out of the bronze age) fashioned with exquisite delicacy (oars are needles), made of worked gold, as fragile as a bird-egg (hatched-out shell) and brought to utter perfection – refined beyond the dross into sheer image.

Of all the representations Heaney plumps for the biretta in Matthew Lawless’s painting, The Sick Call), a solid, pathetic and Irish Victorian canvas.  Why this one … because it has has revealed a priest whom he can respect (reverence): a man visiting the very ill, unfaltering (undaunting), a man with one foot in the world (half domestic), appreciated when it mattered (loved in crises), as steady as the boat in which he travels as each long oar dips and rises, virtuous for having declined life’s pleasures (sad for his worthy life) and totally  suited (fit) for his duty of care.

Heaney speaking to DOD (326): In the boat, you have a priest, and the priest is clearly thinking of the sick parishioner who’s waiting for him and for the holy viaticum (Eucharist as given to a person near to or in danger of death). 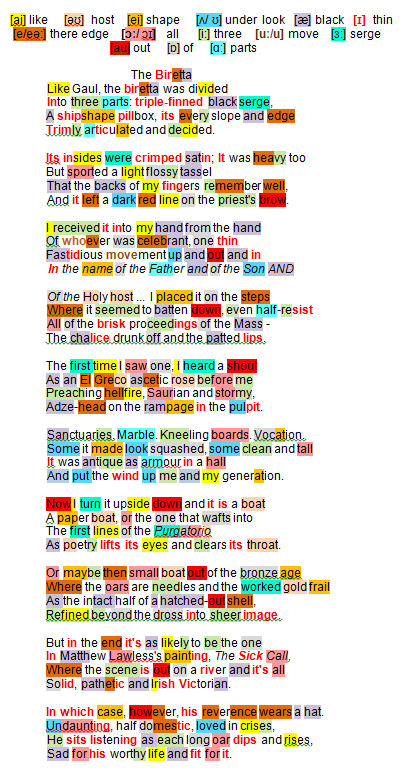