The cottage at Glanmore (located in County Wicklow in the Irish Republic) into which Heaney moved with his family in 1972 was to play an iconic role in every aspect of his life. Initially rented from Canadian academic and friend, Anne Saddlemyer who later sold it to the Heaneys, the cottage witnessed Heaney’s severance from his Ulster past including his University post, cushioned his risky decision to become a full time poet and testified to a huge amount of his poetic output.

Re-visiting early experiences through the eyes of a fifty-year-old poet amounts to ‘old haunt, new eyes, new angles ‘. The seven-sonnet sequence selects moments and events that explore his relationship with the building.

DOD asked Heaney to define its impact on him (325-6):  Workspace, first and foremost. Which meant that it was also a retreat. It remained what it always had been, the poetry house. It’s a silence bunker, a listening post, a holding, in every sense of that word. It holds meaning and things, and even adds meaning. In my life, Glanmore Cottage stands for what Wallace Stevens said poetry stands for, the imagination pressing back against the pressures of reality … I always found the place conducive to writing and it saw my writing life, because I was able to disappear from home in Dublin – which was becoming like a cross between a travel agency and a telephone exchange – and bury myself down there. Meanwhile, the formal purchase we’d arranged with Ann Saddlemyer restored us to the ‘beloved vale’ in Wicklow. Glanmore Cottage was available from then on as a completely silent place of writing, close to Dublin, no phone, no interruptions whatsoever. In fact, the second poem (ii) of the ‘Squarings’ sequence is an immediate act of thanksgiving for the cottage as a ‘bastion of sensation’.

In the early days intimate Glanmore evenings in Glanmore featuring the board game Scrabble – a regular fixture amongst folk fascinated by words.

No carpets, running water or central heating in Glanmore’s at that stage (Bare flags. Pump water. Winter-evening cold) … an open fire insufficient to heat the whole space (backs might never warm up) but faces ruddy with warmth and alcohol hearth-blaze and the hot whiskey.

A sense that the conviviality began before it all began (it felt remembered even then), a truth dating from some earlier time (old rightness half-imagined or foretold), brought to life by remembered sounds of wet wood on an open fire (green sticks hissed and spat into the ashes), a remembered feeling of total impregnability from elemental siege (whatever rampaged out there couldn’t reach us), a memory of semi-darkness (firelit) and protection thanks to window, roof and wall (shuttered, slated and stone-walled).

Pleasure moments dedicated year after year to a regular routine (our game of Scrabble); an affectionate get-together of kindred spirits (love taken for granted) as valued as  Scrabble words formed from the random selection of letters (chanced on and allowed).

The grammarian within Heaney clarifies his pun: a verb, Intransitive. meaning to scratch or rake at something hard0.

Enter, on cue, the shade of Tom Delaney, member of the early coterie, ‘Scrabble’ devotee now deceased, and former archaeologist accustomed to the sounds of metal implements (what he hears … our scraping, clinking tools). 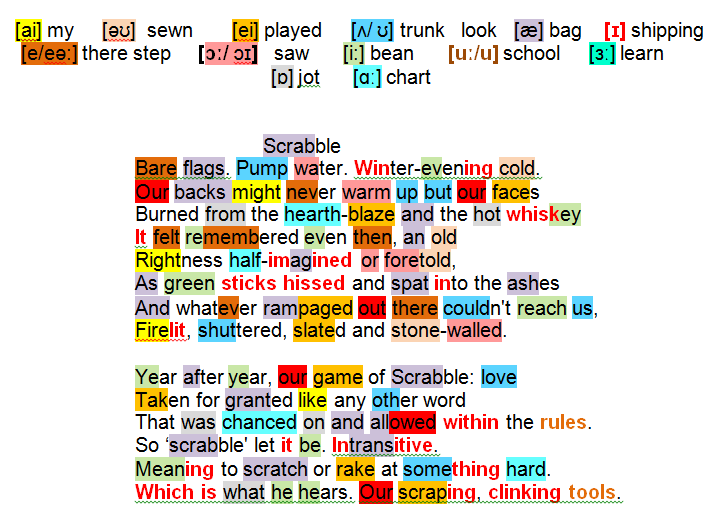