A father shows retrospective remorse for a moment when he lost his temper with his children, aware that he generated a ‘do as I say, not as I do’ situation. The noisy ‘scene’ to which he subjected them is re-worked as a silent melodrama!

The initial incident was real enough: Heaney had invited two close friends, Brian Friel and David Hammond (reduced to one for the purposes of the poem) to carve initials into a garden tree (cut his name into the ash); Having watched the grown-ups Heaney’s sons did little more than follow their example (our kids stripped off the bark) and paid the price of unprecedented (first time) paternal wrath (really angry at them) and loss of control (flailing round the house like a man berserk).

From a distance, Heaney shrugs off the anger (maybe overdoing it), explaining how the business had moved me at the time: obliterating the initials (symbolic of First Nation American Indian brotherhood ritual – blood-brother scenes where two braves nick wrists and cross them for a sign) was tantamount to vandalism!

The tree has recovered over time (healed up) from a wound that exposed its bare sapwood (shone like bone exposed).

Heaney says sorry for the psychological damage he may have caused his children, re-working the bark’s thick-eared health and evidence of repaired damage (welted with a scar) into a melodrama …  a recognition scene with a scarred hero and an old nurse … sight of the old wound producing exaggerated regret (clasps brow) … overplayed guilt (astonished at what all this starts to mean) … involuntary weeping: tears surprise the veteran of the war.

DOD (325) … the carved names recalled a very un-cool event – Michael’s first communion. Brian Friel and David Hammond were down in Wicklow that day and – to mark the occasion – I got them to cut their initials into the tree. Michael and Christopher may well have picked up the example of tree-vandalism at that very moment; but, for whatever reason, they did strip off the bark a few months later.

When John Haffenden interviewed you in the early 1980s, you told him, ‘My temperament doesn’t incline to anger very much.’ Yet isn’t there a suggestion in the ‘Weighing In’ poem in The Spirit Level that it is salutary to let anger rip sometimes?

DF Heaney is prepared to confess his anger and expresses contrition in his own way; a similar incident of him losing control is presented in Summer Home from Wintering Out. With its overt political angle the message of Weighing In is a different kettle of fish; 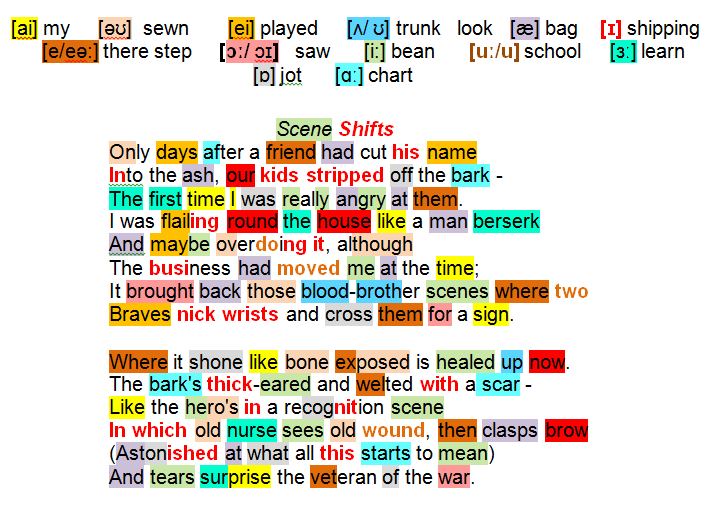