The Wicklow cottage past and present – a unifying symbol.

From those early days Heaney pictures a neglected garden and some basic implements (scythe and axe and hedge-clippers); he hears echoes of the presence of children (the shriek of the gate the children used to swing on); he recalls the hearth tools (poker, scuttle, tongs) to tend the open fire and a gravel rake to remove clinker from the grate.

And now, the cottage still stands there, symbol of an idyllic period (locus amoenus) – the chores are still there to be done (old activity starts up again) but it is no longer quite the same (differently) -their youngsters now lead their own lives (we’re on our own … emptied); poet and wife are ‘sole’ owners (in full possession) of a house that stands for their relationship (whatever keeps between us).

A relationship far deeper than mere keepsakes though there it sits, the unifying factor, the child’s bed that witnessed their daughter’s first intelligible sounds (the ‘doodle do’ of the rooster in the farm across the road) a bed that straddles two generations – Heaney’s own first ‘cot’ at Mossbawn  from the time when, in common with his daughter, the farm and its noises were the sum total of his experience (the whole world … eked and crowed). 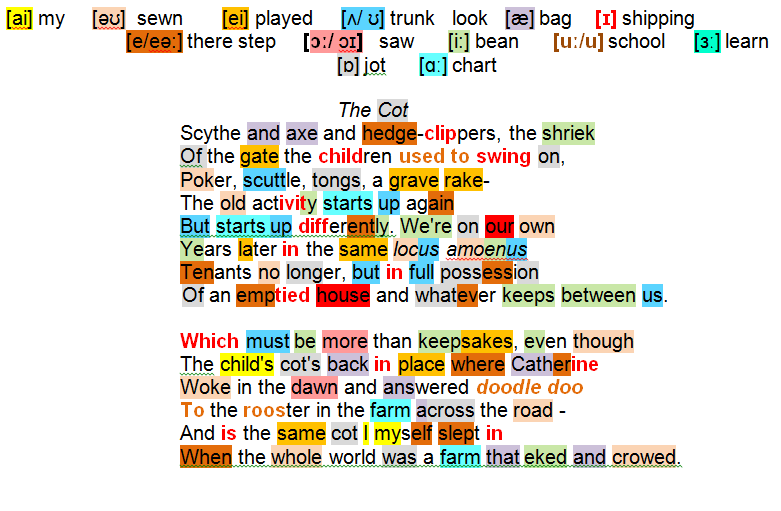