From cover to cover Seeing Things features a series of interfaces: journeys in and out of real world situations; between real and mythical worlds; between secular and spiritual; between existence and annihilation; between objective and subjective; from the present into the future; between first order experience and seeing things anew; between political affiliations. Movement from one side to the other requires a range of crossing points: doors, windows, gates, casements …  the windscreen of a car.

In this piece Heaney comes up against a presence that experience has taught him to be wary of. The poem focuses pointedly on the Ulster’s Troubles and evidence of British forces and military vehicles sent to the province.

Sighing with exasperation (Only), Heaney is slowed (come up behind) by a vehicle he has had to put up with year after year: a standard British army personnel carrier (open-ended, canvas-covered truck) with its payload of armed men (hands round gun-barrels), constricted but zealous (soldiers sitting cramped and staunch), distant (their gaze abroad/ In dreams), uncomfortable against body-heated metal, impassive as armed men ever (time-proofed), seated in regimented order (even distance) … as far as Heaney can make out beyond the windscreen glass.

Heaney senses forward momentum (carried ahead) via a cinematic illusion of the road itself moving in reverse (the phantasmal flow-back of the road). Illusion stops there -these are real soldiers and will not flinch from their military purpose (They still mean business in the here and now).

Heaney asks himself how best to navigate this intrusive obstacle: above all do not attract their interest (draw no attention); just keep moving (steer) and avoid eye-to-eye contact (concentrate/ On the space that flees between) …

… then accelerate past these sweating demons (meltdown of souls) rising from Dante’s straw-flecked ice of hell  and put them behind you.

In the Inferno Dante depicts Satan as a demon frozen mid-breast in ice at the centre of hell;

NC 180  In Crossings xxvi, being stuck behind a British Army lorry in Northern Ireland provokes the quasi-Dantean image of ‘a speeded-up / Meltdown of souls from the straw-flecked ice of hell’. These enlargements of the commonplace when it is brought into apposition with the Christian and classical are managed with tact and finesse in the sequence; there is a vibrantly authoritative assurance in Heaney’s tone and address; 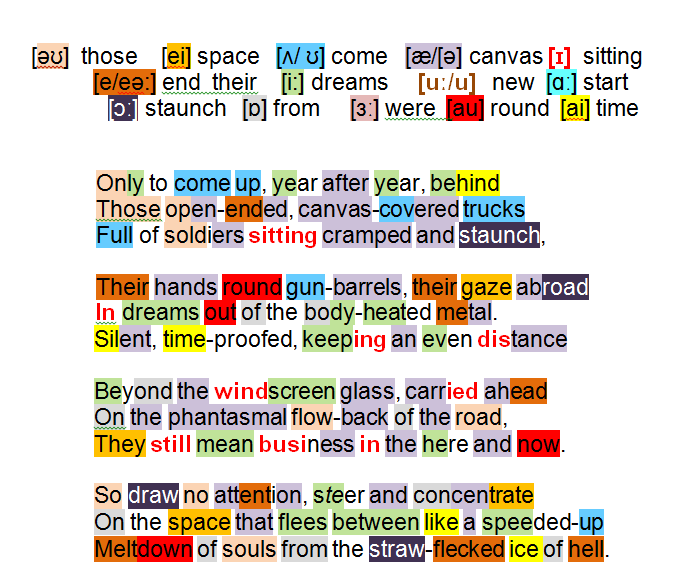