From cover to cover Seeing Things features a series of interfaces: journeys in and out of real world situations; between real and mythical; between secular and spiritual; between existence and annihilation; between objective and subjective; from the present into the future; between first order experience and seeing things anew. Movement from one side to the other requires a range of access points: doors, windows, gates, casements, a car’s windscreen, the human eye.

Then suddenly around a bend (took a turn) the need for an emergency stop (fox stock-still,/ Face-to-face) The driver’s immediate reaction is of combined thrill and panic (Wildness tore through me); he captures the movements and colouring of the fleeing creature on memory-film: the creatures tensing (dipped), turning away (wheeled) and making a loping escape (a level-running tawny breakaway).

The poet addresses the creature in hindsight (O): its attractive head and characteristic tail (neat head, fabled brush), its instant of surprised alarm (astonished eye), its eye colour altering in the sudden brightness (flared into with morning).

Then, equally dramatic, a change of tack, light shone on the reasons for driving fast at this early hour: a mother in labour, a plea for successful outcome (Let), a third child (rebirth) born both protected by a mother’s fluids and on a rainy day (come through water), a daughter both wanted and begotten in love (through desire).

Present at the birth  he has a queasy ‘turn’ and requires a fox-like exit – crawling backwards across clinic floors with an equally astonished eye (that startled iris),  back into fresh air. 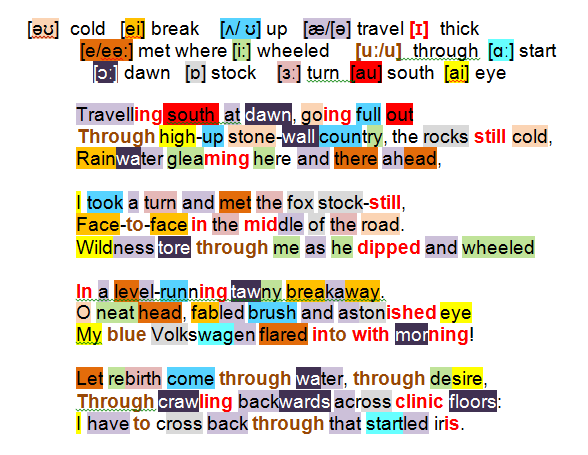