From cover to cover Seeing Things features a series of interfaces: journeys in and out of real world situations; between real and mythical worlds; between secular and spiritual; between existence and annihilation; between objective and subjective; from the present into the future; of first order experience seen through new eyes.

The poem is triggered by recollection of Heaney’s late father’s advice to a close family member. He fondly remembers  his father’s dry, reticent personality and his occasional shafts of wit, fitting for the world in which Patrick Heaney lived and for whatever lay on the other side.

Nothing is for ever (Everything flows). Patrick Heaney stood for solide feet-on-the-groundness,  personal and professional strength (solid man … pillar to himself and to his trade) eternally  recognizable with his yellow boots … stick … soft felt hat.

Post mortem, the poet elevates him to the status of multitasking mythological deity, a Hermes figure (wings at the ankle … fleet), speeding round the Ulster rural scene (god of fair days, stone posts, roads and cross­ roads), once exercising significant responsibility amongst the living (Guardian of travellers) now ensuring the safe passage of dead souls between the world of man and the world beyond (psychopomp).

The brotherly advice he gave to an apprehensive sister about to embark on a journey across the sea to London urged her to select as her guardian-angel a man curiously resembling himself (with an ash plant), to stay close to him on the night ferry and emerge intact (safe).

Heaney cannot slow the passage of time, so let it flow on. He is on his own journey of the soul – he has benefitted from his own paternal soul guide, a shrewd Ulster cattle-wheeler-dealer who encapsulated the mysteries of dealing-men with sticks) … one of an ilk.

HV 138  What does the phenomenal world look like contemplated through eyes made intensely perceptive by unignorable annihilation? HV’s ‘reduction to non-existence’ closes the door on Christian notions of ‘things following life’, confirming Heaney’s agnosticism; 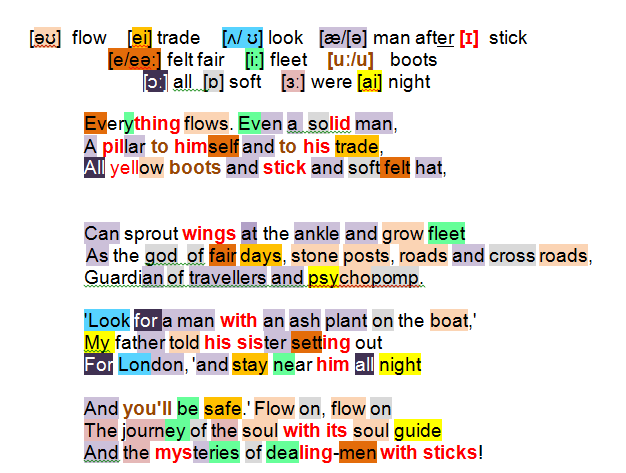