The ‘Settings’ sequence presents a chain of backdrops against which personal events and dramas were played out. Within the dynamic period preceding Seeing Things when Heaney deliberately swooped on anything that stimulated memory or association (DOD 320),  he allowed himself to be transported back by the poems that ‘came on’ to the sites, moments and emotions of previous experience, from where he weighed up what ‘In time … was extra, unforeseen and free’ (Markings I).

HV: ‘Squaring’ xxiv, Heaney’s hymn to natural sufficiency, records the ever-present potential of the senses for a fuller happiness (p147).

The poet composes an anthem to ‘perfected form’. His elated consciousness is undisturbed either by man’s clamour or signs of nature’s turbulence (Deserted harbour stillness); material nature lies in repose and in high definition below the water’s surface (Clarified and dormant under water), ahead is a sturdy man-made construction (harbour wall a masonry of silence). The whole contributes to a tableau of emotional completeness (Fullness).

His eye-camera moves from close-by towards the high Atlantic, its surface-load of vessels all but motionless (moorings barely stirred) and barely perceptible to the ear (slight/ Clucking of the swell against boat boards).

A perfect balance recorded as two major elements (Air and ocean) play off each other, as life and death, in age-old interaction (antecedents … in apposition).

In Dawn of Wintering Out (1972) Heaney escapes from a coach full of academics and  finds refuge on an Italian beach amidst ‘a scurf of winkles and cockles … Acres of their crisp, delicate turrets’;

HV: this ‘Squaring’ is the single most tranquil point in Seeing Things… The solitary view offers nothing but itself, an equilibrium of air and ocean … In Heaney’s wish for emblematic stillness there is almost no sound, and no sudden flashing of light (147).

HV 149 One feels oneself to be fully in the presence of the material harbour scene masonry, boat, stone – and equally in the presence of its felt aura – one of fullness, shimmer, equilibrium. All the elements of language, too, are in bal­ance, the Latinate ‘clarified and dormant’ weighing against the Anglo-Saxon ‘swell against boat boards’. In the final sway of immaterial air against material water, each becomes ‘antecedent’ to the other, and neither takes priority. Air and ocean are then placed in a further Latinate ‘apposition’ with three extraordinary nouns – ‘Omnipresence, equilibrium, brim’ – the first theological, the second scientific. the third emotional. The first and second are Latinate, as befits their learned derivation, the third Anglo-Saxon, as befits its pri­macy of emotion: and the easy ‘slippage’ by which – ‘-brium’ drops off its Latinate ‘u’ and becomes the Middle-English ‘brim’;

HV(p149)  sensual ‘brim’ is the sign of ecstatic sufficiency in the present … But – it should be said once more – this ecstatic sufficiency happens less within the flesh than within the mind: within a still and deserted moment vision is ‘perfected’, and air and ocean are ‘known’ in their reciprocity. The dynamic life of flesh would break this perfection – and so this poem of thanksgiving too is, like all ‘perfected’ things, a hieroglyph of death.

HV (152): let me, the poet says, see purely the co­ presence always and everywhere of life and death ‘known as antecedents / Of each other’. 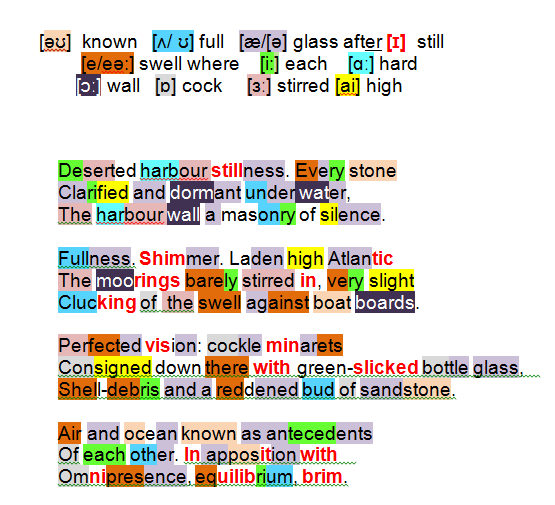