Chancing upon photo snaps from twenty five years before, Heaney takes a new look at an excursion he and his wife took to Hampton Court. The piece pointed a long-distance lens at courtship and the early days of marriage (DOD323). Heaney and Marie had married in 1965 and spent their honeymoon in London.

Both of them look overwhelmed by sun and circumstances (nearly sunstruck); a ‘he’ with a single thought in mind (wild for her) and a ‘she’, to-the-palace-born, with hair style to match (her neck bared in a page-boy cut); the ‘he’ effecting nonchalance (all dreamy  as if a thousand miles away) as they sail on the Thames.

‘He’ notes her alluring pose (Head to one side), her warm weather get-up (sleeveless blouse,  bare shoulder) and the wounded appearance (a bird with a dropped wing surprised in cover) that arouses his protectiveness.

Direct address – she’ becomes ‘Marie’ to whom he speaks: ‘he’ is sincere (looks at you straight), will not resist (assailable), is head over heels in love (enamoured),  has committed to marriage (full of vows) is playing a willing role in a regal fairy story (Young dauphin in the once-upon-a-time).

One last view of Hampton Court’s lowish red-brick Tudor frontage and the scene becomes a stage on which they are the actors.

The poet’s sense-memory is still acute (smell of grass/ And suntan oil), his emotions, too: he recalls their fear of becoming separated in the maze, the need for a push from their their sixth sense  at the entrance … willing them to dare it, telling them to stop being childish (Heartbroken for no reason) and urging them to go for the centre they are lost for.

Hampton Court’s honeymoon images fade and dissolve like reflections staggered through warped glass. He and Marie resolve into a silver-screen couple (pleasure boat … spotlit)  carried back into the past (black and white/ OId grainy newsreel), superimposed on the sunken bridges of unpalatable history: the soundless sites of civil disorder reminiscent of recent Ulster (mud banks where the wounded rave all night at flameless blasts and echoless gunfire.

Troubled times came scarily close to them (ominously figured) but they were destined to survive (borne downstream … unscathed … free passage).

They coped with the irritants (a silk train being brushed across a leper), navigated the worst history could throw at them like two royal favourites, rose to meet their future with bright eyes and bushy tails

… and per se became a source of envy (resented).

Heaney offers imperative advice to the honeymoon couple: keep a check-list, he says, and stand prepared to defend it … they have received what they deserve (by every golden mean their lot Is fair and due) but they will come under scrutiny from the world around them (pleas will be allowed/ Against every right and title vested in them).

Only doers and achievers are judged in life’s court, he declares – as for the others, mere innocuousness/ Has never gained approval or acquittal – no-one can criticize those who do nothing!

Heaney responded to DOD’s general enquiry as to the absence of Troubles’ poems in the collection (p323) by drawing his attention to  the poem’s dream sequence that clearly registers a disjunction between the unscathed life I was living in Harvard and Dublin and the conditions being expe­rienced on the ground in Northern Ireland.

The title offers a number of interpretations: a man freshly married to the girl of his dreams feels like a king; a humble commoner is raised to regal status by a courtly bride; they have every prospect of a bright future.

NC 165-6 Many of the collection’s poems describe (become) allegories of their own creation and perfor­mance; this includes ‘A Royal Prospect’, where the husband is a ‘young dauphin in the once-upon-a-time’, coming through a violent history ‘unscathed’ but ‘accountable … In its wider application to the collection, for Heaney the poem acts as an opening or entrance into the developing self, and indeed the verb ‘enter’ and its cognates recur throughout the book;

MP is not impressed:  A Royal Prospect suffers from ‘High-pitched strain and graduaI declension’, as do many of the sonnets in the ‘Glanmore Revisited‘ sequence. In an interview with Clive Wimer- for BBC Radio 3 in 1990, Heaney spoke of his desire to create a poetry which resembled ‘window glass’ rather than ‘stained glass’. At times, unfortunately, the windows look out on limited prospects, and spareness of style matches slightness of content (p220); 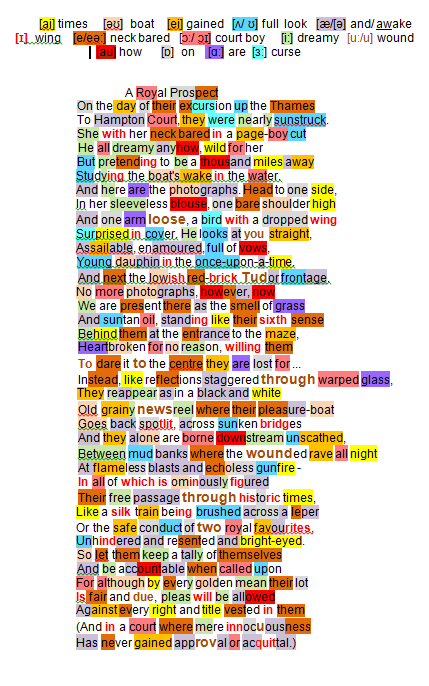