Pillowed Head records the unforgettable day on which Heaney’s daughter Catherine Ann was born in April 1973. Marie has entered labour and they are hospital-bound.

The journey is uncongested (first on the road) amidst early-morning chill (ground-mist) and wildlife (pheasants).

After a seven year break (older and grateful) Heaney has good reason to feel buoyant: Marie is eager to get on with it (half-grateful/ The pangs had begun) having given birth twice before (clear-headed, foreknowing) and mentally prepared (full consent of the will) for the ordeal (trauma).

Heaney recalls the first time: Marie’s inner distress (dismayed), her labour-ward garb (arrayed); the paraphernalia of impending delivery (cut off  gown … stirrup-rigged bed); a third pregnancy has turned her from callow bride to earth mother, a woman in control (self-possessed) with strategies to cover the intervening wait.

The baby is delivered and daddy returns to a euphoric discovery (I half-fainted) – a brand new baby daughter, alive and kicking (the little slapped palpable girl) placed in his arms.

He recovers quickly at the sight of his new daughter’s two wide-open eyes facing the first moments of earthly existence (dawned into farther than ever), the fruit of a long gestation period (had outseen the last of all those mornings of waiting) … a peaceful child (your domed brow was one long held silence) in the midst of nature’s noisy accolade: the dawn chorus anything but.

In conversation with DOD (p168) Heaney added: since we already had two boys, we were hoping for a girl; so when a girl did come it was a special joy. He further revealed that at the time he wrote a sequence of four sonnets to do with the birth, A New Life published in The Listener. These sonnets were ultimately reworked to form another piece entirely (Act of Union).

Poems marking the birth or celebrating the existence of the Heaney children and grandchildren record significant emotional events from Heaney’s and wife Marie’s shared life. Michael born in 1966, Christopher two years later and Catherine in 1973 feature in Station Island; the arrival of first granddaughter, Anna Rose, is celebrated in Route 110 from North and second granddaughter Aibhin in Human Chain

Interestingly, whilst Heaney recalls birth as a miraculous gift, he stops short of ’godsend’, preferring an allusion to the classical Roman Matuta, goddess of the dawn and a later reference to the pagan fertility symbol (earth mother). 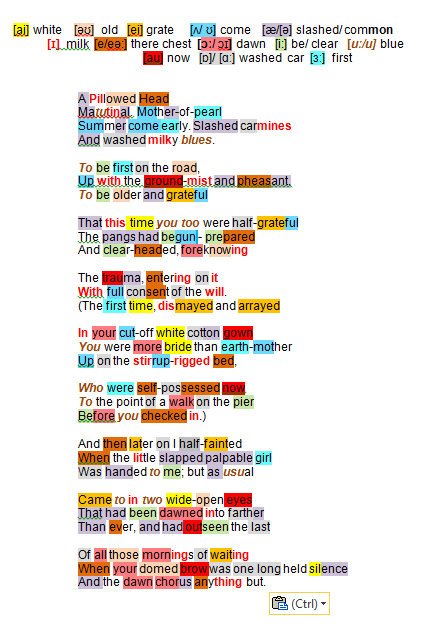