Layers of perception: the Heaneys share a loughscape before returning to a familiar mountainside vantage-point. The mature stage they have reached in life is reflected in both pieces particularly the second.

MP (220): Repeatedly in Seeing Things it is the unpredictability and change­-ability of water and sky which excite the poet and prompt new and unusual angles of vision.

A watercolour in words of an Irish lough-scape dominated by liquidity. To all appearances (apparently) the land is afloat and the man-made gives way to the dominant element: Every road bridging or skirting water. Terra firma is water-locked if not waterlogged (islanded), each landmass a fortress with its own defences (field drains still as moats), guarded by tall, erect plants (A bulrush sentried).

Heaney ventures into the water (Wade barefoot), familiar with the properties of the lough floor beneath his feet … its bounciness (spongy … soft); its temperature (ice-cold marsh); the peat layer  (bog water seeping through); his weight borne by a lattice of netted weed.

In total contrast to the mud in which it grows the bulrush Heaney has gone in search of appears Perennially anomalous and dry, softly draped and silky Like chalk or velvet.

Familiar with washes of paint and water, the poet describes the landscape in painterly terms: Everything ran into water-colour that softened lines and blurred meeting points – (skyline … full up to the lip … earth ( ) going to brim over, each seeking to overwhelm the other.

He and Marie have learnt to spot furtive changes (the first stealth of flood), that might threaten disruption to fortress-Heaney: the swim and flow/ From hidden springs … a river in the road.

The Heaneys on another trip, a familiar route up to Glenshane Pass, an emotionally charged reminder to Heaney of his weekly exile from his family (his ‘Trail of Tears’ … the road to boarding school) – an outing routinely accompanied by his learned commentaries on local history: English invaders enforcing  land confiscation and quelling uprisings by the wild ‘uncivilized’ Irish; the latter as unimpressed by the status of James 1’s representative (the King’s deputy) as Virgil’s ghosts  would have been surprised to see Aeneas alive in Hell.

He and Marie have come there to enjoy the feel of the valley out behind, on a journey between superimposed layers of reality (a ladder leaned against the world), with a built-in apprehension that they might fall back from the select, rarefied air of their current circumstances into the total air and emptiness of a previous life they carried on their shoulders.

The route takes them skywards (the old road  Went up and up) as did the thrill of past activities and sensations (lover country … drive-in in the sky) with its silent witnesses – parked car playing possum, favourable time of day (twilight) amidst the vastness of the airy structure (cloud moved/ Smokily in the deep of polished roofs), protection from prying eyes (dormant windscreens).

Now he and Marie feel a touch out of place (astray in the hill-fort of all pleasures) – the heated passion of old has been replaced by a calmer sensitivity to the surroundings (air was other breath and grass a whisper) – yet unable still to dislodge of the repressive sexual mores of 1950s Ulster (empowered but still somehow constrained).

As Young marrieds, free to ‘do it’ at home (the licit within doors), being there as old marrieds takes something away from the sweetness that had lured them – no need for a hillside bed in which to lie together (nest in rushes), no evidence of bodyweight (heather bells unbruised), no aphrodisiac (Iove-drink of the mountain streams untasted).

They sit there as representatives of Irishness (the fasted eyes of wild inhabitants), parked where the Glenshane overlook (brae) drops steeply (sheer) into a landscape of historical occupation (baronies and cantreds), at a level above look-down-through dam water, clear (open) to the mind’s eye and worth savouring (the visit lasted).

So they sat, lost in thoughts beyond the self (gazed beyond themselves) until ‘he’ brought it all to an end using a clutch start (brake off  … freewheeled … into gear) (no longer possible in modern vehicles). The jolt as the engine fired generated immediate, predictable cries of surprise (their usual old/ high-pitched strain) before dying away (gradual declension). 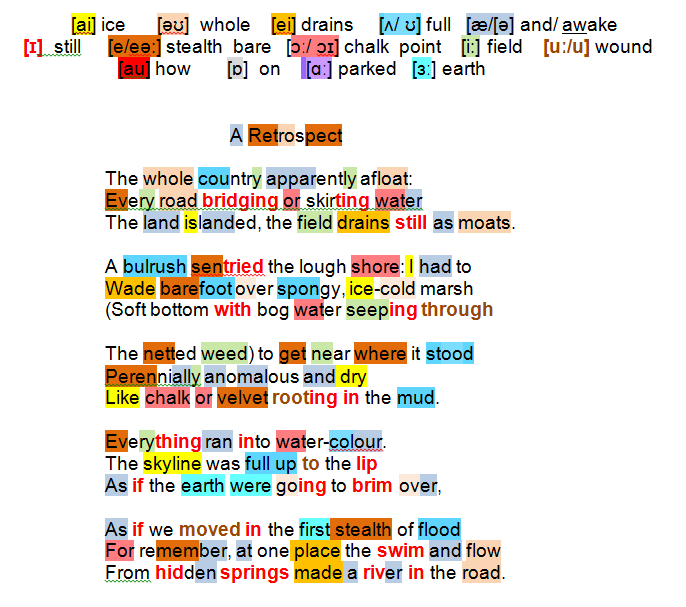