Heaney composes a sequence featuring three static graphic art shapes: a two-dimensional Renaissance drawing that Heaney realizes he once once copied in three dimensions as a youngster at the seaside; a much earlier sacred mural revamped for the twentieth; finally a Dublin Bay ‘canvas’ capturing in words the painting of an abstract artist who lived and worked there and to whom the poem is dedicated.

Old postcards of Portstewart reveal the natural deep pool in which boy-Heaney on vacation could immerse himself and did (waded in up to the chest), then found his floating balance (half-suspended) and adopted a Vitruvian pose: (legs wide apart … arms stretched sideways  buoyant to the fingertips), the sea level with his arm-pits, vital for coordinated movement (oxter-cogged).

Entering unheated sea-water caused giddiness (my head was light) and stiffened his stance (backbone plumb) – his most sensitive extremities (boy-nipples … bisected and tickled) reacted to the icy feel at the height the water reached (steel-zip cold meniscus).

Secondary school physical drills at St Columb’s (hard scrabble of the junior football pitch) in the hands of a real name (Leo Day, the college ‘drillie’), a teacher bursting with energy (bounced) and in full control of his class (counted … kept us all in line) amidst the gym apparatus (wooden horse) – he, the voice of authority (‘One! Two! In! Out!) … they, instantly obedient (we upped and downed and scissored arms and Iegs). Out in the fresh air they could rest their ‘Vitruvian’ body shapes against its flow (spread ourselves on the wind’s cross).

Heaney links the body tensions he felt a schoolboy at the time (palms … tautly strung) to a work of art he has seen since (Francis of Assisi in Giotto’s mural); in fact he can do better in words than the tempera’s flat, fixed representation of the seraphim shock-waves (angelic neon) that have pierced holes (stigmata) in the saint’s body –he depicts it as an instantaneous lightening-strike (zaps the ping-palmed saint).

He hangs on to disparate memories (can connect some bits and pieces), one loaded with colour (my seaside whirligig), another related to the beach’s 360 degree flatness and expanse (cardinal points), a third recalling the murky depressing days when sea and sky merged into one (grey matter of sand and sky); the final descent of celestial brightness (light that is down to earth) that spreads and lifts his spirits (fan out and open up). 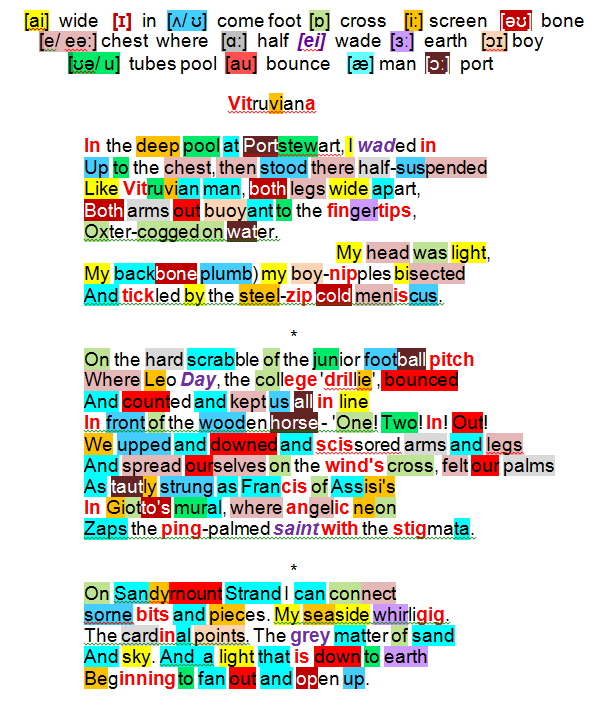