Heaney offers us his version of Virgil’s original.  He remains loyal to the original but weaves into his translation the subtleties of meaning he perceives, adding the alliterations, assonances, mood and rhythms that ensure that Virgil’s original ‘song’ remains pleasing to the ear.

The inclusion of the eclogue form in Electric Light is meaningful. There is much in Eclogue IX of 37BC that chimes with Irish experience and Heaney’s inner preoccupations 2000 years on: dispossession and change of routine imposed on ordinary folk from above; the apparent  impotence of opposition and repression of the vox populi ; the role of poetry in this respect and the dangers this brings; the reluctance of poets–in-waiting to wade into the debate; the opposition of lyrical celebration and polemic; the deplored absence of inspirational leaders; the weedy efforts of creative spirits who hide behind the parapet.

Virgilian dialogue follows the path of two of the twenty or so characters who appear in the ten eclogues – locals on their rural road to town in their rich, provident landscape.

LYCIDAS: Where are you headed, Moeris? Into town?

MOERIS outlines the impact of dispossession and the nature of tyranny

The things we have Iived to see … The last thing / You could’ve imagined happening has happened. / An outsider lands and says he has the rights / To our bit of ground. ‘Out, old hands,’ he says, / ‘This place is mine.’ And these kid-goats in the creel – / Bad cess to him – these kids are his. All’s changed.

LYCIDAS reports hearsay – the power of a public voice said to have put a brake on tyrannical land-grabbing:

The story I heard was about Menalcas, / How your song-man’s singing saved the place, / Starting from where the hills go doubling back / And the ridge keeps sloping gently to the water, / Right down to those old scraggy-headed beech trees.

MOERIS corrects rumour; he was present, read the omens and, by restraining outspokenness, almost certainly saved their lives:

that’s what you would have heard. But songs and tunes / Can no more hold out against brute force than doves / When eagles swoop. The truth is, Lycidas, / If I hadn’t heard the crow caw on my left/ In our hollow oak, I’d have kept on arguing/ And that would’ve been the end of the road, for me / That’s talking to you, and for Menalcas even.

LYCIDAS accepts what he hears but deplores the repression of free speech and with it the poetic voices that celebrate patrimony  in madrigal form – the inextricable relationship between delightful surroundings, natural abundance, country life and the characters that live there – all applicable to Heaney’s motherland.

Shocking times. Our very music, our one consolation, / Confiscated, all but. And Menalcas himself / Nearly one of the missing. Who would there be to sing / Praise songs to the nymphs? Who hymn the earth / To grow wild flowers and grass, and shade the wells / With overhanging green? Who sing the song / I listened to in silence the other day / And learned by heart as you went warbling it, / Off to the Amaryllis we all love? / The one that goes, ‘O herd my goats for me, / Tityrus, till I come back. I won’t be long. / Graze them and then water them, and watch / The boyo with the horns doesn’t go for you.’

MOERIS refers to an unfinished appeal from Menalcus asking that political leaders learn lessons from what has created massive unhappiness in a neighbouring city-state:

And then there was that one he never finished, / Addressed to Varus, about a choir of swans / Chanting his name to the stars, ‘should Mantua / Survive, Mantua too close to sad Cremona.’

LYCIDAS feels that he has not yet mastered the art of poetic persuasion and that now is the moment for MOERIS to add his voice to the clamour so that local life remains unpolluted by politics:

If you’ve any song to sing, then sing it now / So that your bees may swerve off past the yew trees, / Your cows in clover thrive with canted teats / And tightening udders. The Pierian muses / Made me a poet too, I too have songs, / And people in the country call me bard, / But I’m not sure: I have done nothing yet / That Varius or Cinna would take note of. / I’m a squawking goose among sweet-throated swans.

MOERIS is only just drafting a song comparing the lyric beauty of their surroundings with the demented stentorian voices of the ruling class:

I’m quiet because I’m trying to piece together/ As best I can a song I think you’d know: / ‘Galatea,’ it goes, ‘come here to me./ What’s in the sea and the wave that keeps you  spellbound? / Here earth breaks out in wildflowers, she rills and rolls / The streams in waterweed, here poplars bend / Where the bank is undermined and vines in thickets / Are meshing shade with light. Come here to me. / Let the mad white horses paw and pound the shore.’

LYCIDAS suspects he has heard MOERIS in much greater protest mode – he recalls the pastoral melody and searches for lyrics that hinted at the absence of inspired leaders:

There was something I heard you singing by yourself / One night when the sky was clear. I have the air /

So maybe I’ll get the words. ‘Daphnis, Daphnis, why / Do you concentrate your gaze on the old stars?

Look for the star of Caesar, rising now, / Star of corn in the fields and hay in haggards, / Of clustered grapes gone purple in the heat / On hillsides facing south. Daphnis, now is the time / To plant the pear slips for your children’s children’.

Age robs us of everything, of our very mind , / Many a time I remember as a boy / Serenading the slow sun down to rest, / But nowadays I’m forgetting song after song / And my voice is going: maybe the wolves have blinked it. / But Menalcas will keep singing and keep the songs.

LYCIDAS urges MOERIS to show his bardic mettle in the privacy of each other’s company and away from prying ears:

Come on, don’t make excuses, I want to hear you / And now’s your chance, now this hush has fallen / Everywhere – look – on the plain, and every breeze / Has calmed and quietened. We’ve come half-way. / Already you can see Bianor’s tomb ./ Just up ahead. Here where they’ve trimmed and faced / The old green hedge, here’s where we’re going to sing. / Set that creel and those kid-goats on the ground. / We’ll make it into town in all good time.

Or if it looks like rain when it’s getting dark, / Singing shortens the road, so we’ll walk and sing. / Walk then, Moeris, and sing. I’ll take the kids.

MOERIS confirms his old-man’s faint-heartedness by cutting Lycidas off:

That’s enough of that, young fellow. We’ve a job to do. /When the real singer comes, we’ll sing in earnest. 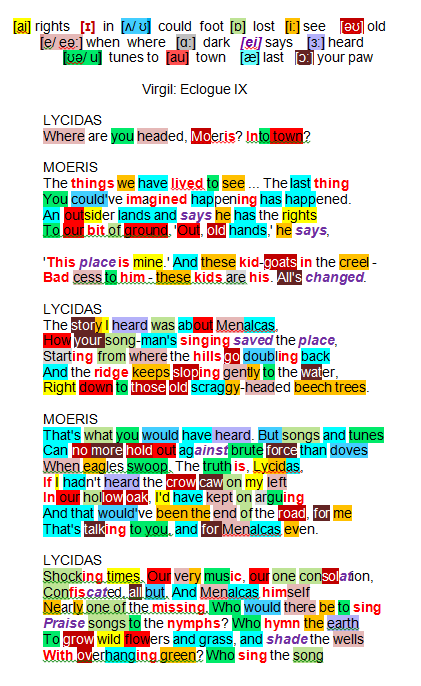 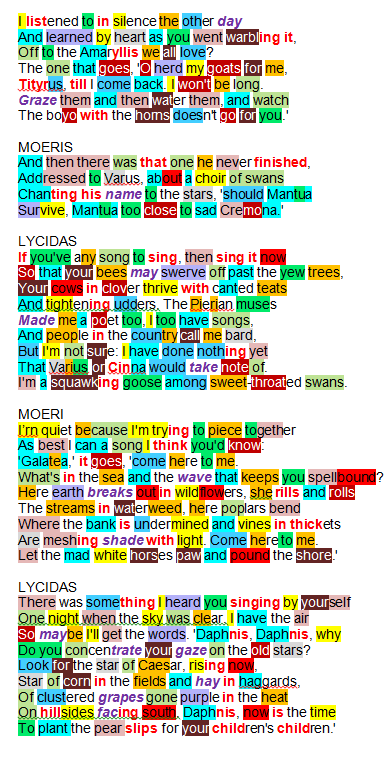