The five section sequence laments a clutch of Scottish poets all of whom have passed away in the period preceding Electric Light. ‘Deer’ emerges as a unifying motif. In  Station Island’s ‘On The Road’  the prehistoric deer inscribed on a Dordogne cave wall became Heaney’s emblem for the creative force that his quartet of elegised poets have undoubtedly bequeathed to Gaelic and Scottish literature and heritage. Shakespeare’s three witches from Macbeth melt in and out of the narrative in their capacity to prophesy.

A couple on a Scottish visit chance upon Highland wildlife. ‘His’ sharp eye has spotted a quartet of elusive creatures hiding in the heather, deer camouflaged against the Highland background. The sight will have allegorical consequences.

What appeared to be an empty landscape from the browns of heathland (colour of meadow hay) to its flowers (meadow-sweet) and coarse grasses (liver-spotted dock leaves) is not so.

The spotter’s eye zooms in to reveal the presence (there before we noticed them) of deer – on the qui vive in the dusk (all eyes and evening), scarcely visible above the growth (up to their necks in the meadow).

The spotter steers his eager but unseeing companion via a muffled dialogue (‘Oh yes. Of course, yes. Lovely.’)

The creatures were not spooked (didn’t move away) – they brought an electricity to the circumstances (like the air agog) freezing the moment (step of light on grass, halted mid-light). Both watchers and watched underwent adrenaline surges, the accelerated thud of blood flow (heartbeat) and sharpened vision (pupil).

The creatures maintained their charged presence (match for us) knowing all along that they were not alone (watching).

Heaney summons the shade (come forth) of Norman MacCaig  from the water meadows of an Oxford college with its own herd (deer of Magdalen) – shy creatures (startlers standing still) out of context, both deer and MacCaig himself, in an incongruous Oxford riverside habitat (fritillary land) far removed from their Highland origin (heather-sentries far from the heath).

Elements of Shakespeare’s ‘Macbeth’ intervene – a role (Be fawn), the forces of opposition in play (redcoat, gallowglass), period-theatre staging (Globe), the  threat of tragedy – dire warnings from the witches to Macbeth – that he will be vanquished when woodland moves against him (tidings of trees that walked and were seen to walk).

No response forthcoming: the deer remained still (they did not move); no sign of MacCaig’s shade emerging (he did not come forth).

Heaney commemorates Iain Crichton Smith via his piece ‘Deer on the high hills ‘ (to Heaney’s mind it showed how Smith’s Gaelic identity was overtaken by English: Englished lain MacGabhainn. Ironically Heaney whose home and poetic language was English spent a lifetime pursuing and confirming his Irish identity.

Smith assembled 14 pieces evoking the expanse and isolation of the Scottish Highlands (linked verse), wandering wherever his muses took him (where the spirit listeth), producing confident rhythms (perfectly sure feet).

Recalling how Macbeth’s witches melted away (‘into the air, as breath into the wind’) Heaney regrets Iain Crichton Smith’s passing as with the other Gaelic writers in the sequence (‘would they had stay’d’ that too).

MacGabhainn encapsulated Heaney’s feelings in ‘When Day is Done’ (where sorrow just sits and rocks – ‘Sorrow remembers us when day is done. / It sits in its old chair gently rocking’).

A single allegorises an admired Gaelic poet  Sorley Maclean rising above destructive reality. Maclean materialises as a Saharan illusion (mirage), a Highland icon in silhouette (stag on a ridge) soldiering in North Africa (western desert) amidst WWII chaos (above the burnt-out tanks).

Sorley Maclean 1911-1996 : regarded one of the major Gaelic-speaking Scottish poets of the modern era; drafted into the Royal Corps of Signals in September 1940 he served  overseas to North Africa’s western desert from December 1941. In a Guardian article of November 2002 Heaney saluted MacClean as the author of ‘epoch-making poems that brought Scots Gaelic poetry to life between the early 1930s and the late 1950s’;

Heaney elegises Gaelic-speaking poet George Mackay Brown in the context of the island where the poet spent most of his life. Brown’s Gaelic pedigree goes hand in hand with Orkney’s landscape and fauna (drinking deer that glittered by the water  –  human soul in mosaic), providing the richly textured past from which the poet was fashioned.

A hardy poet (allegory hard) born of watery, invasive Orcadian flora (wet celandine and ivy) as solid and skilful a wordsmith as the island’s metalworkers of old producing weapons (figured shield smithied in Orkney) for christianized Scandinavians in present-day Constantinople on medieval missions against Muslims (for Christ’s sake and Crusades). The weapon’s rich finish (polished undersurface) was a reminder of its far-distant bog-land provenance (like peat smoke mulling through Byzantium). 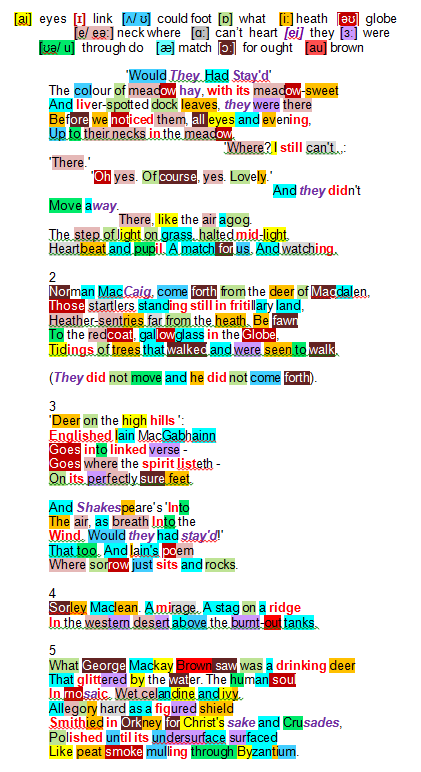