A bookcase standing in the Heaney home indicates the joint tastes of Heaney and Marie and triggers layers of association in the mind of a widely read, aesthetically-sensitive and highly imaginative Irish poet.

The piece is constructed to high specification and entirely fit for purpose – made of quality material (ashwood or oakwood); expertly prepared (planed to silkiness) and joined (mitred); each length of wood tested for straightness (much eyed-along) and naturally coloured (vellum-pale); shelves that have stood the test of weight and time (held and never sagged) – in short, perfection (virtue … from its very shipshapeness).

Heaney’s memory-eye comes to rest on a book-spine that by its colour triggers a 1940s’/50s’association (rough blue paper bags loose sugar was once sold in); if the book’s publisher was a head-scratch (Oliver & Boyd’s?) the title was not (Collected Hugh MacDiarmid).

A second volume (Selected Elizabeth Bishop) the colour of skimmed milk bluey-white published by Chatto sits next to a matching pair (murex of Macmillan’s Collected Yeats… Collected Hardy) with a selected poem from each.

The bookcase held records too (voices of Frost and Wallace Stevens …  a Caedmon double album) – including a recording of Dylan Thomas at the top of his voice, the Welsh poet who fell victim to his addiction (the Bushmills killed) and, foreseeing his inevitable demise perhaps, left a poignant legacy along the lines of ’let off steam about things and hang on for as long as you can’ (‘Do Not Go Gentle.’ ‘Don’t be going yet.’)

An association with childhood is generated by the swing of the bookcase door (the gate I hung on once at Mossbawn that followed the same scientific principle (swung its arc through air) and opened wide (round to the hedge-back).

Heaney’s in-home door opened with a slight stiffness (druggy hinge) and revealed collected treasures (load divulging into a future perfect tense) under the relaxed eye of poet and wife (hang loose, ruminating), both revelling in the home-grown content (‘ books from Ireland’) and consulting a 7th century non-Irish commentator (Venerable Bede ) who averred that early Irish books had curative medicinal properties – a mystical potion – scrapings off individual pages steeped in water deemed to soothe the worst possible symptoms (palliate the effect of snake-bite).

Bede’s conclusion, much applauded by the Heaneys, is that Ireland (this isle) is a God-favoured site of comforting security: ‘almost everything confers immunity’.

Heaney appreciates the bookcase’s design (I liked the lines and weight of it), its proportions (measuredness), its placement and the craftsmanship (carpentered right angles); he shudders at the thought of its loaded weight (I could feel in my neck and shoulder).

He looks up two scenes from the shelves (books from everywhere) that paint bleak images: firstly a William Faulkner character, a carpenter (Cash in As I Lay Dying), outlining the design of his mother’s casket – with its sloping edge (‘on the bevel’), easier to secure permanently (more surface for the nails) and more impressive (a better job) to those who will attend her funeral.

Secondly the stage set of an Irish one-act play (Riders to the Sea … Synge) reveals new boards standing by the wall placed there as coffin wood for Maurya’s son Michael who is missing at sea or another son Bartley who intends to brave the storm in search of him. Maurya’s foreboding will come true for both her sons (like storm-gleams on the flood), their coffins floating in the swell.

Heaney’s bookcase is drawn into the scene, recovered (salt salvaged) from the watery depths and rebuilt as a raft for books, or to transport a coffin and its contents (bier to be borne) – he pictures himself and Marie set to bear a heavy load (braced ourselves for the first lift) then thrown off balance (staggering) by the unexpected– without corpse or books it has no weight (grown so light). 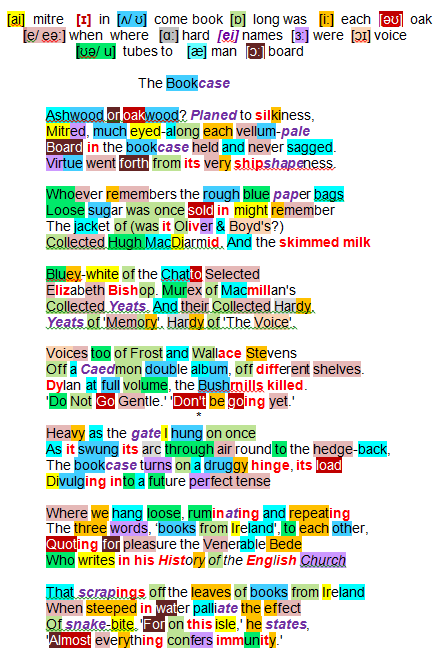