Glosses figure in the margins and between the lines of poems in composition or books being read, not just as a poet’s comment, explanation, interpretation or paraphrase of something penned, but equally a new layer of consciousness or a fresh association to be borne in mind or the germ of a new piece.

In that respect Heaney’s Ten Glosses fascinate and absorb as the wider intent of each emerges. They are compact, to the point and poetic. Perhaps for this reason the background information required to get to grips with them can considerably outweigh the word count itself.

Ostensibly this first gloss draws together quotations and characters from Shakespeare’s ‘Macbeth’ (I wait for Banquo and Macbeth to come) and what a studious scholar has decided in advance (prepossessed by what I know by heart).

It is his title reveals that reveals the tragic parallel on Heaney’s mind – what unfolds on stage (‘What bloody man is that?’) recalls graphic images of Ulster’s sectarian violence and the proximity of murder during the ‘Troubles’ – the brash percussive sounds announcing the arrival of Orange parades (‘A drum, a drum!’) herald confrontation and hatred.

The dreadful irony is that actors tied to the text of a tragic play and sectarian bigots from one side of the sectarian divide or the other behave with script-like predictability (unbowed, on cue, and scripted from the start).

Heaney admitted to DOD that he suffered from a surfeit of Catholic training in childhood (‘formed my mind’). Part of the oral training aspect of his religious upbringing were the ingrained cues and responses of catechism (Q. and A. come back).

At this stage in his life Heaney sees so little evidence of neighbourly love at home or abroad that his compassionate nature pens a response that all could and should aspire to live by: ‘My neighbour is all mankind.’

Heaney’s extended metaphor amounts to a prayer for the success of power-sharing in Northern Ireland. He depicts a structure capable of spanning the chasms of prejudice and self-interest separating his contemporaries; he views bridging gaps as is an essential work of grace that demands all that one has to offer.

Emphatic repetition of first and last line in this piece’s approval of political developments is reprised in Beowulf’s wise response in The Fragment which follows.

The poet’s unifying structure is built to solid engineering specifications that, to overcome adverse forces, build in tolerances (steady under strain … strong through tension); it links opposite banks and opposing sects (feet on both sides), but remains impartial (in neither camp) and resistant (stands its ground) – it stands as an icon under constant scrutiny (span of pure attention), of strategic defensive importance against attack (holding action); its structure and way onto and off the roadway (arches and ramp) are designed to bridge the bumps and gaps in understanding and acceptance which keep warring individuals and groups apart (steady under strain and strong through tension).

Heaney composes a pun-rich spoof generated by a deal struck between tailor and customer (Heaney himself).

He recalls the tailor’s pitch (he said) and promise to provide the ideal match of garment and the poet’s frame (balance it perfectly on you).

Heaney was taken (could aImost feel) by the idea of trousers that would satisfy line, length and fashion (plumbline of the creased tweed), corrugation-free (hit my heel), plus a jacket tailored to his shoulders (like a spar) and wrists (arms of a scale) – indeed promising a whole new persona (my whole shape realigned), for which he finds a pun to express his positive judgment (ways that suited me down to the ground).

Whilst he had not actually come in for a suit he listened to the sales patter (weighed his words) and bought it (wore them) on the spot (there and then) seeing the deal as a ‘snip’:  going for a song.

The  dominance of memory over circumstance.

A poet killed in wartime, too young to have achieved his true potential (unexpected softly powerful name of Wilfred Owen), is mentioned in a social gathering (overheard at the party) impacting on Heaney’s mind with a depressing thump (like wet snow that slumps down off a roof).

Memory of the blinding mire of WWI trenches resurfaces ironically as people cheerfully toast each other’s health (mud in your eye) and conjures up in Heaney’s mind the after-shocks resounding in Owen’s merited otherworld (artillery in heaven).

Heaney sketches stages in the life of a hugely talented and highly complex poet who lived and worked on both sides of the Atlantic.

Auden’s ‘old’ world – his blue riband education (Oxford) and travel for pleasure (Iceland and Spain), his leftist anti-Establishment and psychoanalytical interest (Berlin and Freud), his flirt with communist theory (Marx) across a whole decade (the Thirties) – was superseded by the ‘new’ world (New York), by his engagement in an enduring  all-male love affair (Chester) and the search to rekindle his faith (God).

The period (pause for po-ethics) produced a yield of personal lyrics loaded with matters of principle (moral ascent of Parnassus) later winding down to a cocktail of opera, dolce vita (retrenchment, libretti, martinis) and the leisure of companionable middle-age (the slippers, the face).

A product of York (conceived in the Danelaw), Auden somehow retained the attitude of folk upon whom long ago the Vikings imposed a historical language shift and who still objected to it (ruction).

To Heaney Auden’s high pitched peremptory voice (barker of stanzas) was highly distinctive on in both poetry reading and classroom (star turn… source of instruction) and spelt out his rare talent (definite growth rings of genius rang in his voice).

Heaney pays tribute to a friend (David Hammond), a master raconteur delivering a tale of Irish black humour with a religious slant. For all its short length the poem’s enjambed format permits pauses to be built in by the storyteller as he strings his audience along … Hammond’s shaggy-dog story is long in the build-up and arguably only funny in the punch-line because of the story-teller’s skill.

Hammond heard the tale when he was out carousing (on a spree) …. from a fellow who claimed to know….the cleric (the priest … chaplain on duty) …. who was supposedly present and in receipt of the final comment of a convicted man about to go to the gallows … (morning the last man was hanged) in a now defunct Belfast prison notorious not least for its nationalistic reputation amongst Irish folk of its time (Crumlin Road Jail).

Hammond has drawn his listeners into a situation where they hang on to his every word however increasingly unlikely …  the final earthly moments of a condemned man … a priest trying very earnestly to follow his pastoral script …hoping perhaps to be called on to show compassion for the despair, tears of remorse, maybe a last prayer… no sir … the gallows-bird shows deferent insouciance (he shook hands) before taking his final steps (went to the hangman) … And what was that final comment? ‘Father, this is going to be a lesson to me’.

Heaney does not report audience reaction!

8  Moling’s Gloss (from the Irish)

An ageing hermit turned ecclesiastic confesses there are two sides to him: when with senior clerics (among my elders) he behaves correctly, is holier-than-thou in manner (know better) and superior (frown on any carry-on).

Out with the younger, devil-may-care priests (brat-pack) out-of-bounds and breaking the rules and vows (on the batter) Moling,participating,  sheds the years (taken for a younger man).

Perhaps most elusive of the ten glosses, Colly hides Heaney’s ‘dirty glove’ of the Troubles’ period behind the ring of a popular children’s rhyme and the reality emanating from mid-twentieth century Northern Irish back-to-back working-class estates.

The legendary Fenian white charger (Niamh’s horse for Oisin) is just fine (grand) however Heaney’s working-class speaker opts for something less high flown – a different conveyance (saddle me colly) figured as a chunk of sooty matter caught up in air currents (giddy on wind) that conjures up the historical figure key to Irish religious partition and sectarian division (black as the hair on King Billy).

Soot – a physical and metaphorical blot on the urban 1940s’to 70s’ landscape – lifted skywards by the heat of coal fires (chimney flakes), visible to the eye (flecking the air), landing at will on immaculate laundry strung out to dry (carbon-dotting the white wash on the line), carried in mocking military formation by the wind (fly-past) to the frustration of those affected by what was beyond their control (freak-out of soot).

Heaney jots down a gloss in response to something he has been reading – a century after the Norman invasion of England, Gerald of Wales (of Norman origin, settled in Cambria but researching Ireland) reflects on parallels between the perceived layers of his fundamental persona (marvellously yourself) and the apparently ‘unchanging’ that is flowing by in front of him (the river water … in Arklow harbour).

DOD 373 Nobel Prize laureates sometimes fear they will never write another word. What in fact was your first post-Nobel poem (1995)? Seamus Heaney I was asked to do a tribute to Norman MacCaig, and all of a sudden I remembered an image from the Norman writer Giraldus Cambrensis and came up with ‘A Norman Simile’; the muses were instructing me, I thought, to be myself, not to go with public expectations of something oceanic and tidal and super-Nobelish, but to stay fresh and true to the old channels’. 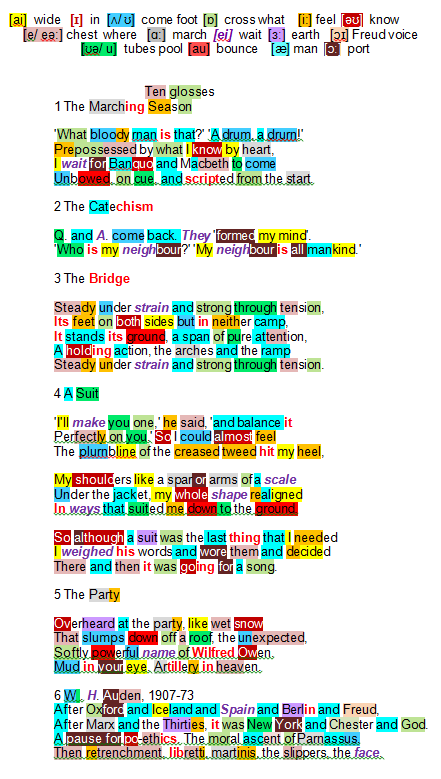 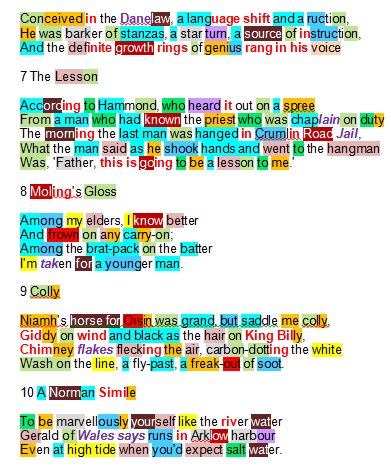