Heaney alludes specifically to a guerrilla warfare campaign carried out between 1956 and 1962 by the Irish Republican Army against targets in Northern Ireland. Local knowledge confirms a direct link between the poem’s opening scene and an IRA attack on Magherafelt Court House on December 12th 1956, the day after the campaign was launched, at a time when Heaney was a teenage boarder at St Columb’s College in Derry.

The poem contributes to a time-line of Irish politics and, via an Anglo-Saxon epic, the emotional response of a teenage boarder to unfolding events in the area where he lives and the city where he is schooled.

The visual aftermath of explosion: the shell of a public building (soot-streaks down the courthouse wall) where ‘justice’ was petitioned … damage exposing it to the elements (hole smashed in the roof) … the enduring effect of arson (the rafters in the rain still smouldering).

The impact of the attack filtering through next day to the teenager in his Derry boarding school was like a blow to the stomach (left me winded) as he stared from his confines (my boarder’s dormer) into the heavens beyond (the sky that moved), the same firmament that witnessed something from his studies of the Anglo-Saxon poem ‘Beowulf’ and the hero’s response to a mythical monsters’ attack on Danish King Hrothgar: Beowulf has mortally wounded the monster, Grendel, in violent single combat in Hrothgar’s mead-hall stronghold (Heorot) – signs of morning after savagery have ebbed away – its reflection placid in the evidence (waterlogged huge pawmarks Grendel left) of the dying monster limping along the path (boreen) to its den in a marshy fen.

Heaney is recounting the pivotal moment when he, the watcher from an upper window at St Columb’s College (part of then), was inextricably drawn into the unfolding violence of what would become the Troubles (all that was written and to come).

His response was to share (at one with) the eagerness of Hrothgar’s kinsmen (clan chiefs) who followed the route (galloping down paths) and inspected the monster’s torn off talon nailed high on the gable, proof that evil had been destroyed. Around him now and them at that moment of triumph … the haughty indifference of the elements just going about their business: sky still moving grandly.

The picture is completed by a triplet variant of Heaney’s own ‘Beowulf’ translation (ll.983-6) that sums up the terrifying, flesh-tearing strength of an evil monster’s body-armour: Every nail and claw-spike, every spur / And hackle and hand-barb on that heathen brute / Was like a steel prong in the morning dew.

Heaney’s very appropriate dedicatee, Nadine Gordimer (South African writer, 1923 –2014, political activist and recipient of the 1991 Nobel Prize for Literature) was recognized as a woman ‘who through her magnificent epic writing has, in the words of Alfred Nobel, been of very great benefit to humanity’. 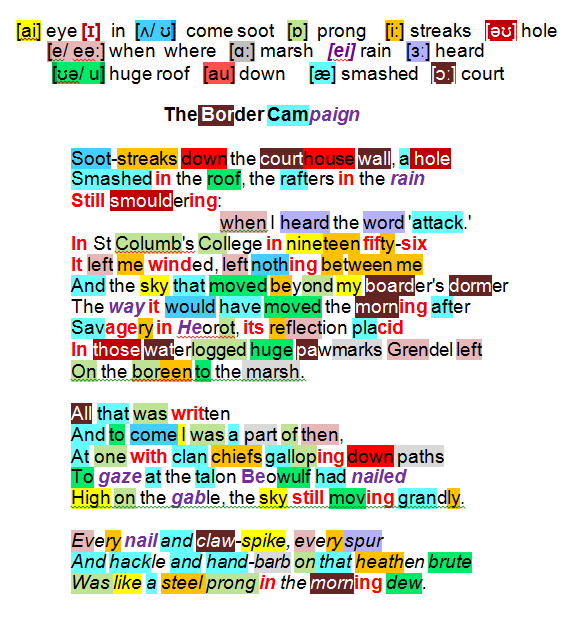