Heaney’s father, Patrick appears on a score of occasions in the Heaney collections between ‘Digging’, the very first poem of Death of a Naturalist (1966), and ‘Lick the Pencil’ from Human Chain (2010), the last published collection in the poet’s lifetime.

Heaney covered every stage in their father-and-son relationship – from his childhood awe of the wheeler-deal cattle man and small farmer carrying his iconic ash plant walking stick – to his developing recognition of his father as a fellow mortal with strengths and weakness like himself. Heaney acknowledges and regrets the awkwardness they experienced in expressing their affection for each other, in, for example, a group of poems from The Spirit Level (1996) and later in Album iv from Human Chain.

What emerges is Heaney’s deep love and respect for a dying father expressed very poignantly. Heaney describes the impact of his bereavement: My father’s death in October 1986 was the final ‘unroofing’ of the world and I’m certain it affected me in ways that were hidden from me then and now. (DOD p322)

Finally made ready to meet a ‘proper’ Catholic death (anointed and all) Patrick Heaney reminded his son of a fictional character who passed away after a virtuous and industrious life (Hopkins’s Felix Randal).

The cancer that triggered his father’s weight loss was neatly deflected by the sick man’s typical quip (‘wee in his clothes’).

Heaney junior refers simply to previous experiences the old man can no longer envision (something spectral he’d thrown off), as when, from the time before marriage commitments (unbelonging), he responded to a family bereavement in England’s Northumbria (the moorland part of him), when dutiful (bounden) teenaged Patrick Heaney, already bearing the ash-plant (stick) he would become known for, faced a demanding challenge (bringing home the dead body of his uncle by cattle-ferry).

Thus brave and responsible Heaney senior was tied into family practices to do with cattle management (ghost-drover from the start) flourishing a tool of the trade (brandisher of keel).

Similarities of exemplary hard work and virtue shared with Randal, yes, but different individuals: the latter a fashioner of fine (fettled and bright) horse-shoes fitted to demonstrate the power of dray-horses (battering sandal); his father dressed as the down-to-earth, hands-on Irish cattle-man he was (cowdung coloured tweed and ox-blood leather).

Patrick Heaney – a man remembered for his shrewd judgment (assessor’s eye) his mental record of every figure (tally-keeper’s head) and cattle provenance (beasts …  land … year) – now deprived by dementia (went as well) and with it his ability to avoid being hoodwinked (all precaution).

The thing he did retain despite illness, a two-way sunny warmth of Irish vintage (smile a summer half-door opening out and opening in), a cheery radiance that helped extend his days (reprieving light) free of pain thanks to the medication he was given (tendered morphine).

Felix Randal the farrier, O is he dead then? my duty all ended, / Who have watched his mould of man, big-boned and hardy-handsome / Pining, pining, till time when reason rambled in it, and some / Fatal four disorders, fleshed there, all contended? // Sickness broke him. Impatient, he cursed at first, but mended / Being anointed and all; though a heavenlier heart began some / Months earlier, since I had our sweet reprieve and ransom / Tendered to him. Ah well, God rest him all road ever he offended! // This seeing the sick endears them to us, us too it endears. / My tongue had taught thee comfort, touch had quenched thy tears, / Thy tears that touched my heart, child, Felix, poor Felix Randal; // How far from then forethought of, all thy more boisterous years, / When thou at the random grim forge, powerful amidst peers,/ Didst fettle for the great grey drayhorse his bright and battering sandal! 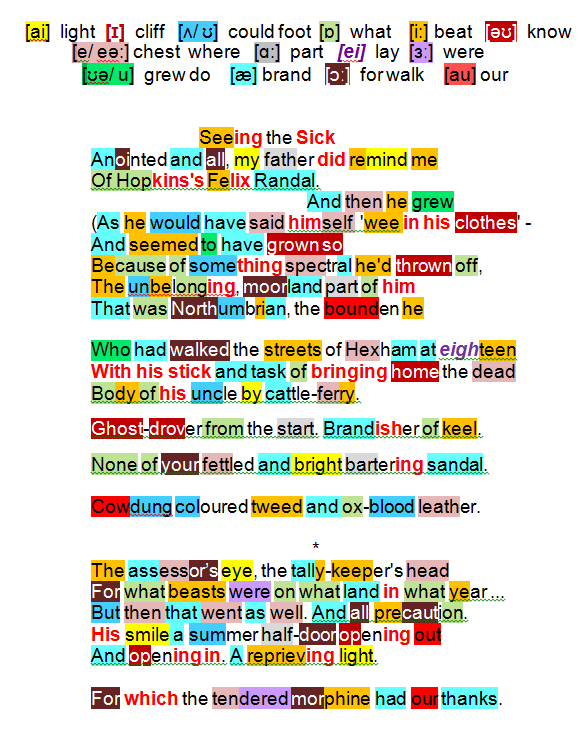