Five colourful vignettes depicting a country acknowledged by many as the cradle of western civilisation and a land of milk and honey – five ‘diary entries’ in verse – a moveable feast for senses, spirit and intellect recalled in vivid and intimate detail.

Heaney spoke to DOD of his 1995 holiday (369) … Marie and myself and Cynthia and Dimitri Hadzi. … long promised, long deferred, but finally it had become inevitable. I’d done the first Sophocles translation five years before  (‘Philoctetes’ premiered by Field Day Theatre Company as ‘The Cure of Troy’) and had just published a limited edition that included the ‘Mycenae Lookout’ sequence, with art work by Dimitri.  I’d got to know the Hadzis in Harvard. Being Greek-American, Dimitri spoke some modern Greek; and being a sculptor in stone and bronze, he was an ideal guide to the sites. Cynthia had travelled the route with Dimitri several times before – Ancient Corinth, Mycenae, Epidauros, Arcadia, Sparta – so she was our driver.

Coincidentally it was during the holiday in 1995 that news broke of Heaney’s Nobel Prize for Literature and created the drama of contacting him with the news!

In praise of sheer abundance (opulence and amen) – walnuts purchased on the roadside from a globe-trotting local (once in Melbourne, Australia) drawn back to his homeland, whose primitive irrigation system (pipes and runnels of split reed offers proof positive that little has changed in Arcadia over nearly 3 millennia (known  in Hellas probably, since Hesiod).

Even greater surprises in store (the least of it): a layer of poorly loaded apples strewn over the road surface (burst open) – perceptible within the car via tiny ups-and-downs (raunched) and the sound of squashing fruit (scrunched) that left the vehicle splashed with a rich layer of fruity matter (juiced up and fleshed and spattered); the whole episode a source of great fun for the travellers (revelling in it).

To cap it all a timeless icon of ancient Arcadia (goatherd with his goats) standing incongruously amidst the twentieth century (forecourt of the filling station) – a remnant from a Virgilian age (subsisting beyond eclogue) who has survived across the ages (translation).

Seventy miles to the south the travellers are scaling a footpath to the acropolis in Sparta amidst a swirl of sense data (dank, sunk, rock-floored lane) and the underfoot echoes (tramping on burst shells and crunching down) of mellow Spartan fruitfulness (conkers …high-gloss horse-chestnuts).

Heaney ponders how best to express the conkers’ shade of brown – something from the sea perhaps (kelp … bladderwort), some shade seen on a young animal (foals’ hooves) or the tint of a cared-for shoe (dubbed leather). His next test is to describe the distinctive aroma of crushed chestnuts (tainted pith) held to the nostril: not entirely pleasant (hint of ordure) but not pervasive (coming and going).

Onwards and upwards – past reminders of mythical one-eyed monsters (cyclopic stone), over earthworks (rings of defence … breached walls) in guilty possession of ‘stolen’ goods (looted conkers gravid in my satchel).

The final scene replaces the strenuous activity of people getting to the top with a peaceful canvas of those who made it: a big-sky background (daylight moon) … a foreground in which an artist reaps the artist’s rewards for his efforts (Dimitri … sketched) … in a stance at once mythical (squared … shoulders like a centaur’s) yet anchored in this world (nodded, nodded, nodded towards the spouses), heedful of wives chatting out of sight (heard but not seen)  behind a middle-ground of thick acanthus.

On the Peloponnese coast eighty miles west of Sparta the poet looks from his window onto the sea-front at Pylos. The associations generated lead him in tribute to the American scholar who primed Heaney to see beyond and beneath the surface.

Early morning  invigoration – shoals of sea bounty (Barbounia schooled) …  reflections of a rising sun on the beach … the intimacy of incoming breakers (wave-clip and flirt), their thudding impact (tide-slap), collapse and ebb (flop and flow) – restoration and rejuvenation for Heaney, conjuring up the image of a mythological son in search of his heroic father (Telemachos, young again) and the colourful ancient world beyond the whitewashed light of morning.

The play of light flashed on the ceiling urges Heaney (early warning) not to be distracted (be more myself) by things immediate, however seductive to his senses the mast-bending marine breeze.

The curved mast and its ropes (image of the bow strung as a lyre) create an involuntary link (key the understanding) to a Harvard Professor and teacher who brought the ancient legends to life: Robert Fitzgerald (Harvard Nestor akin to the wise old king of Pylos in Greek history).

Heaney chose the name, he tells DOD (273), after Fitzgerald had taken him on one side at Harvard and pointed out the hidden demands of the Boylston chair of Rhetoric and Oratory, the contract Heaney had been offered and would take up in 1984.

Heaney lauds Fitzgerald’s qualities: his kindness to the poet, an Irishman abroad (sponsor and host) … his mammoth achievement (translator of all Homer) … his health-consuming commitment (wasted face in profile) … his moments of distant concentration (ceiling-staring) … his attitude that of an elderly yet far from world-weary man (not yet past caring) … his eagerness to miss nothing (scanning the offing) … his insights and caring guidance (far-seeing shadower).

An antique frieze-carving depicts the mythological goddess Athene offering support (nod of her high helmet … staff sunk) to a divine hero faced with a seemingly unattainable task – she is showing Heracles where to harness (broach) the powers of nature (Alpheus flowing out of its course) as an ingenious, labour-saving means of removing thirty years of neglect (deep dung strata … reeking yard and stables).

Continuous downhill river flow from the water tables will remove both stench (sweet dissolutions) and wash away foul solids (blocked doors and packed floors) turned to liquid (deluging like gutters ).

Heaney’s volta paints a shocking contrast – images of sublime surroundings (Olympia, down among green willows), of a cleansing river flowing calmly (lustral wash and run of river shallows) shattered by news of a foul political assassination back home in Northern Ireland (Sean Brown’s murder in the grounds of Bellaghy GAA Club).

Heaney spells out the paradox– pressured water deployed (hose-water smashing hard) to cleanse the car park of the evidence of barbarism that killed a community-minded sixty-one year old: where his athlete’s blood ran cold.

Heaney and his group have moved onto the Greek mainland north of the Gulf of Corinth close to Delphi.

She who guards the Castalian site (thunderface) betrays an anger of godlike proportion (not Zeus’s ire, but hers) as she seeks to prevent an Irish visitor (!) from entering the spring site itself.

The poet’s temper rises (mine mounting from it) in face of of impending failure to achieve what he came all this way for (drink the waters of the Castalian Spring), a thing he views as the just desert (arrogate … to myself) of an Irish bard in a place dripping with poetry (under the god Apollo’s giddy cliff).

The shock of unexpected obstruction (inner water sanctum … roped off) is followed by an expletive explosion (to hell with that … to hell with all who’d stop me, thunderface!) as he brushes authority aside (up the steps then, into the sandstone grottoes).

The sonnet’s volta lowers Heaney’s blood pressure from furioso to calma – once access is achieved the poet has space and time to take in the seeps and dreeps, the shallow pools, the mosses, and reflect that both he and the natural water entering the site along distant geological channels have ended up here from beyond, and come far. He acknowledges he is soothed (useless anger draining away) shows his reverence (bowed) and drinks freely from the spring (mouthed in sweetness) adding a nod of approval for his refusal to be deterred (defiance)!

An evening celebration set in the hilly area around Delphi.

The holiday-makers sit together at sunset in the farmyard, gorging themselves pre-dinner Greek-style refreshment (we wolfed down horta, tarama and houmos) and aperitifs (ouzos), making light of the high-pitched histrionic outbursts (squeal) of a dead ringer for the Delphic oracle (streel-haired cailleach in the scullery).

They move on leaving the hag to her family (allow them to sedate her) driving up to Desfina for a dinner of further Greek delicacies – wine (retsina), seafood (anchovies, squid), stuffed vine leaves (dolmades) plus a ubiquitous non-Greek side-dish (french fries even).

Heaney’s over-indulgence blurred the journey back (my head was light … hyper, boozed), made him feel like an alien (borean). Unforgettable however the white-knuckle experience (bowled back down), the skidding navigation of bends (siren-tyred), the demented ‘clear-out-the-way’ warnings (manic on the horn), the succession of hairpin bends so frequent as to resemble the endless reversed lettering of a Greek inscriptions (looped like boustrophedon). 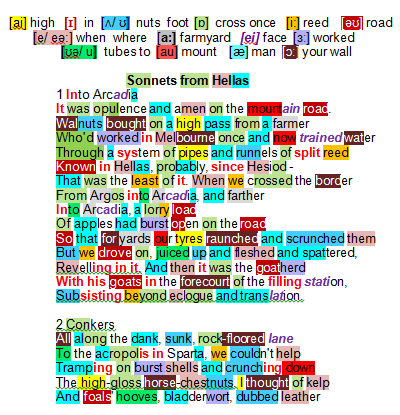 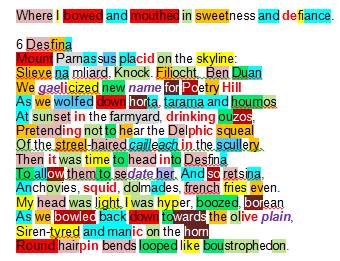