Revisiting moments from his and Marie’s past Red, White and Blue provides insights into the man Heaney has become.

Each of the three poems bears a distinctive colour marking associated with wife Marie at specific moments in their history.

The magnetic attraction of a red garment and a shy student’s realisation that ‘nothing ventured’ is ‘nothing gained’.

The poem is addressed retrospectively to a girl at a student hop from a time when the girls often danced together and the men tended to a stand and weigh them up. It’s non–poetic reduction might go something like this: ‘do you remember the night we met … you were wearing a trendy dark red jacket … it excited me … and here we are still an item’. He later claimed I was shy at hops in the university , was never what you’d call a good dancer and that Marie was a terrific jiver’ (DOD pp45-6).

Stung by the comments of a student standing next to him and knowing he would have to get in first Heaney shed his inhibitions and set his sights on the red-jacketed Marie. The garment would figure in later photographs (much-snapped scarlet coat): it had a hunting-jacket look (fitted waist and tailored shoulder) that lent itself to the horse-and-rider motif first instigated by his defeated rival. In that first instance he was wowed by the teasing combination of garment and girl inside (nifty, tricksy bounce) swaying together in time with the beat (your knee behind and your knee in front).

As if spurred by the unflattering comments of a potential rival (Marie a wee pony ‘on the make’ … butter wouldn’t melt in that smiler’s mouth) Heaney went for it.

His smile of seeming acquiescence (as who should say, ‘Good God … you’re absolutely right) masked the truth  –  he was drawn by the go and gladsomeness in her, the challenge of seeming inaccessibility (something unbroken), the ease with which she would see off (her gift for pure dismay) unwelcome advances from shits like you.

She was prepared to dance (good fortune) and, suddenly in the driving-seat, Heaney was happy to rub it in (smile again into his peeky face) as he and the girl engaged in high-octane activity (you jived with me hell for leather), surrounded by onlookers enjoying the exhibition, the cleared floor turned paddock in which the newly-mets tested their responses to each other (rope and scope and snaffle) and discovered they were on the same exhilarating wavelength (‘Redingote!’ … ‘Giddy up!‘).

Two shades of white: the holiness, purity, and joy reflected in the pristine cleanliness of the labour ward in which Marie Heaney lies; the colour of craven cowardice Heaney applies to himself!

Heaney the expectant father in dutiful attendance was concerned by the wall of sound emanating from the public baths next door (screaming from the pool) in continuous use (busloads of schoolkids coming in on rota), its screeching banshee acoustic only amplified by the building structure (the glass-and-iron dome upping the wildness). He fears Marie will misinterpret the screaming as the painful experiences of the women in heavy labour close by.

Deliberately excluded from the final stages (at last-kiss, time-to-go time), Heaney recalls the touch of her (dry on the lips, hot-cheeked) left alone to cope with her ordeal as if cast adrift on an ice floe (the high berg of the bed).

The poet’s attempts to transmit his familiarity by touch falter; Marie’s moment of enforced isolation (your quarantine was making you touch-proof) rendered further contact  inappropriate (my hand that thought it knew its way got lost) and he backed off (shied).

Their renewal of sexual intimacy (the thick of thickets, the hug and birl) and shared loss of control (pleasures wrought to anger and beyond) currently at the forefront of his mind will have to wait (ahead of us, my love, the small-hours tournaments).

The moment of departure is transformed into a medieval tale reminiscent of courtly love:

He is the knight who proved his unworthiness by riding away from combat (left the lists) and fleeing the fairy-tale scene (the sun-daunting keep of Castle Childbirth);

Marie is  the lady of the castle in childbirth (contracting), shut away (bastions) knowing that hospital policy excluded him (lilied moat … uncrossble  … drawbridge drawn up), with no way in (battlements secure) and incommunicado (audience with the chatelaine denied).

Poised to abandon Marie to her pain (eyes eye-tooth tightened shut against the pangs) Heaney labels himself ‘Sir Cowardice’ (the Knight of the White Feather turning tail).

An encounter between two young Northern Irish hitchhikers and an upper-crust British couple prepared to ferry them free of charge awakens the medieval troubadour in Heaney as he paints the cameos of two female figures – the first a real and permanent presence in his life, the second a product of his lyrical courtly love imagination!

Beware female intuition! Marie deliberately tested Heaney’s apparent attraction to the woman by ridiculing (mimicked) her upper-crust pronunciation (pretty, veh pretty). Heaney countered: ‘veh’ was totally consistent (entirely unaffected) with the image she presented (genuine touch of class) as confirmed by her positive take on a local stately home (praise of the gate-lodge and the avenue at Castlebellingham).

He portrays her as a lady ‘to the manor born’, naturally suited to upper-class life (deigning … bestow … attention) subject to sudden impulses (whim) that included picking up a young couple by the roadside (hitchhikers who must have taken her fancy).

Her husband, on the other hand, of the same ruling ilk (officer … in civvies on weekend leave), sounded for all the world like a remnant of British male imperialism with pre-conceived ideas about Irish history and using a label frowned on by the Irish (southern Ireland, as he called it). His feigned interest (‘Tell me, I mean, you know’) was a deliberate put-down (your crowd burnt the lot down, did they not?) highlighting Catholic Irish arsonists rebelling against planted Protestant Scots and English landowners.

Heaney and Marie do not rise to the bait (we simply dived for cover. ‘We’re from the north’) when they might have reminded him of the cycle of 1920s’outrage and revenge that followed the burnings (surprise attack … quick torrent of the names of towns burnt in reprisal).

Heaney’s poetic charge comes from the chatelaine figure – not just for her affectation (vey) or her hauteur (half-interest) but for her imagined sexuality (letting her warm silks fall) to be consummated in some romantic retreat (lamplight of some coaching inn in Wicklow) – in Heaney’s version of courtly love the aloof goddess  will deign to bestow her favours and bring her idolizing male to heel in the process (recall a hero to his ardent purpose).

Heaney puts a brake on his imaginings (doves or no doves) acknowledging the godsend of a Venus car after a long wait for a lift. He credits it to Marie, emerging Venus-like by the roadside (a Botticelli dressed down for the sixties), a study-in-blue presenting itself to the oncoming vehicle (you rose before them) in trendy contemporary gear (fair Isle tank-top …blue denim skirt… denim jacket) and heavy cosmetics to match (much blue eye make-up).

So it was – an all but noiseless top-of-the-range carriage (their big waxed Rolls flows softly to a halt), tailor-made for stepping aboard (running board … level with the footpath) … above all, a magic brand name that carried them (borne – sweet diction) ever deeper into the Irish Republic (south and south) and onto the next stage of their adventure.

‘Ocean’s Love to Ireland’ from North reveals Heaney’s deep-seated sympathies for the Irish condition and the long-term effects of Elizabethan invasion and subsequent Irish dispossession at the hands of anglo-scottish invaders and their descendants. Earlier poems ‘Servant Boy’  and ‘The Last Mummer’ from Wintering Out make powerful statements about Irish sentiments, the first portraying a male servant working for ‘planted’ landowners, averse to his subservient status but left with little choice but to turn the other cheek  and bide his time in the hope of improved circumstances, the second a last survivor of Irish tradition driven to direct action. 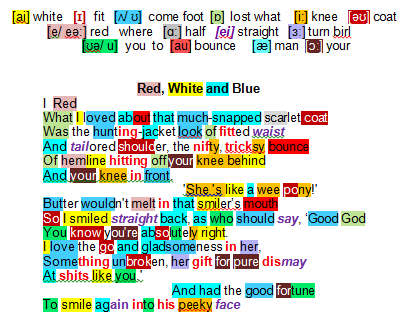 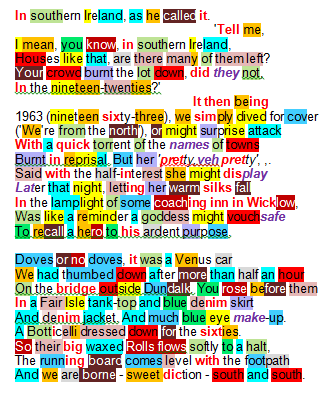