Heaney’s trout of Death of a Naturalist (1966) possessed the lightning reactions of a missile. In complete contrast the indolent perch can be observed in the Bann’s clear waters lying stock-still on its water-perch, in its favoured location near the clay bank at a spot where light effects reflected in the water are never still: alder-dapple and waver.

Heaney spells out their long-term presence in his consciousness and their ‘style’: known in his community as ‘grunts’; lumpy, misshapen water dwellers (flood-slub); of diminutive size (runty); ever putting off the next move (ready); at home in a home-from-home of God-like splendour: the river’s glorified body.

In a water-zone where traffic should be fluid (passable through) the perch obstruct the way ahead like militaries with some kind of mission to accomplish (bluntly holding the pass), snoozing (adoze), mouths in constant chewing mode (guzzling the current), resistant to being pushed backwards (against it) constantly readjusting (all muscle and slur), as much at home in their fish habitat (finland of perch) as the wetlands in which riverside birches flourish (fenland of alder).

Could they but express their contentedness then they would be ‘walking’ on air that is water above the river’s rich ground cover (on carpets of Bann stream), busy doing nothing (on hold) in a dolce far niente of calm relaxation and unhurried idleness: the everything flows and steady go of the world. 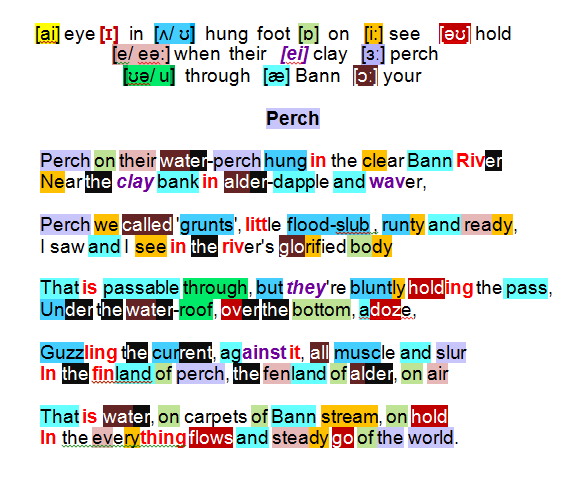