In her review of Electric Light (Irish Times of Mon, Jun 3, 2019) under the heading ‘Heaney the survivor’, Helen Vendler suggests that ‘the best vehicle for a memory-cluster is a poetic sequence. The most daring sequence in this collection, one about illness and health, begins with the childhood fantasies that attached themselves (in the precociously active imagination of the child Heaney) to the repeated arrivals of the doctor who “brought” a new baby in his bag’.

How the myth was reinforced: Seamus Heaney was born in 1939, the first child of Margaret Kathleen and Patrick Heaney living on the family farm at Mossbawn. He was followed at regular intervals by Sheena (died 2002), Hugh, Patrick, Charles, Colm, Christoher (killed in a road accident in 1953)), Daniel and Ann. As the eldest he was still pre-school when subsequent siblings were ‘delivered’ by Dr. Joseph Philip Kerlin, the local doctor, based in Magherafelt, Co. Derry. For a local doctor in rural Ireland in the first part of the twentieth century the delivering of babies would have been an important part of their work, and the bag Dr. Kerlin carried on each occasion was an evocative symbol of his profession.

Heaney chuckles at his own childhood misconceptions of childbirth (only revealed in the final lines of the poem-sequence and based on something his mother repeated to him that led him to believe that he and his siblings came ready-made, produced as if by magic out of the bag and placed in her arms in the upstairs room.

The routine the youngster observed was standard: Doctor Kerlin arrived with tightly fastened bag … he, the child/watcher, was excluded from interim activities … later, his bag open and empty, the doctor engaged in post-‘delivery’ ablutions – a stage which led child-Heaney to the conclusion that the doctor was a man with a gentle touch (those nosy, rosy, big, soft hands of his).

Heaney-poet presents the proceedings as those of a magician performing a now-you-see-it-now-you-don’t illusion: evidence supporting the child’s notion that the doctor brought the babies with him was as clear as day – the bag once securely fastened now stood open – its internal light brown colouring (short of descriptive vocabulary, child-Heaney turned to things already seen) likened to a spaniel’s inside lug.

As anyone on the audience might witness the clasp of its trap-sprung mouth had been released (unsnibbed …  gaping wide) and the bag was empty for aII to see.

Awakening as if from a trance (hypnotist unwinding us), the child watched the doctor packing away the tools of his trade (he’d wind the instruments into a cloth  … like an apron).

Kerlin has no time to hang about; no sooner is this mission complete than his departing shadow (darken) crosses the threshold  and is gone, bearing, in the child’s Sunday School  mind, the legendary upside-down Noah’s plump ark by the keeI.

Another baby … same routine (on this occasion the colour of Kerlin’s fashionable fur-lined collar under the child’s scrutiny matches his bag (also spaniel-coloured) … the tall man goes stooping up the stairs to the ‘delivery’ room with its familiar smell (whiff of disinfectant). The scene’s light effects (voiced momentarily to a cultured, mature poet) are akin to a Vermeer canvas (Dutch interior), betraying a touch of flamboyance (gleam of waistcoat satin) to contrast with the doctor’s strict professional approach (highlights on the forceps).

The post-delivery duty of the ‘kitchen staff ‘ is to prepare hand-washing water ‘as the doctor ordered’ (not plumping hot, and not lukewarm … soft, sud-luscious) drawn before the advent of mains-water from the rain-butt in the yard outside.

The resultant bowlful is much appreciated (savoured) by this modest man of few words (all thanks denied). Then finally a quick reflex (arms out suddenly behind him), an unspoken bidding to a valet to help him dress for the outdoors (squired and silk-lined into the camel coat).

The doctor’s piercing eyes (reminders of a make-believe realm where blessed children were born – hyperborean, beyond-the-north-wind blue) provided, in the child’s vivid imagination, peepholes into a baby-assembly room with baby-feeding liquids (skimmed milk and ice), everything cleansed and cold (swabbed porcelain, the white and chill of tiles, fearsome medical equipment (steel hooks, chrome surgery tools), and for the first time scary evidence of a mother’s physical injury (blood dreeps in the sawdust).

To crown it all at ceiling height a line of pendent, skin-coloured teat-hued infant parts strung neatly like washing items – a range of baby parts (toe… foot … shin … arm  … and, to boy-child—Seamus’ amusement, a cock …

… a shape he has seen somewhere before: a bit like the rosebud in his buttonhole.

The scene shifts to the sacred site at Epidaurus that Heaney visited on a Greek holiday in 1995 with Cynthia and Dimitri Hadzi.

Heaney and his ‘learned consultants’ (all three erstwhile Professors of Poetry at Oxford University) have each combined creative writing and academia: classical scholar (Poeta doctus Peter Levi) sheds informed light on the Sanctuaries of Asclepius … asclepions … hospitals In ancient Greece; a second scholar (poeta doctus Graves) plumps for shrines like Lourdes. Both sites were and are revered as places where miracles might happen and people be cured of their illnesses.

Heaney expresses his own ‘cure’ – the unpredictable therapy of writing poems (the cure by poetry that cannot be coerced). Heaney reflected on his choice with DOD (p388): some cures can in a certain sense be ‘coerced’ – by operations, by antibiotics and the like, but there are others that occur slightly mysteriously – through the intervention of a healer or a doctor or a prayer. The good that poetry does is akin to that kind of intervention;

Epidaurus boasted standard classical facilities for the infirm (theatre and gymnasium and bath) plus a place for incubation, explained by Heaney in teacher mode as technical and ritual, meaning sleep,  where prostrate patients discovered themselves  (epiphany) and received a visitation that restored their health (met the god).

Heaney has fallen foul of the heat on both sites: a late-teenage religious mission to Lourdes in 1956 sponsored by an aunt exposed him to the sun (hatless), caused dizziness (groggy), debilitated him (shadowing myself) with no means of escape (thurifer … in an open-air procession). In Epidaurus plucked emblematic grass that he proposed to post off to folk threatened by cancer brought near collapse (nearly fainted).

Semi-delirium (hallucinated) included Doctor Kerlin drawing images on the kitchen window for child-Heaney (steamed-up glass … dot-faced men … button spots … women with dot breasts … droopy sausage-arms and legs) that, as the child noticed, were short-lived (began to run); next, Doctor Kerlin on hand-washing routine (dipped and laved) … then a kind of ‘divine’ fantasy (miraculum: the baby bits all came together swimming) coinciding with his perspiring (blinded with sweat) , doddery (blinking and shaky in the windless light) wake-up moment.

Heaney clarifies the grass incident: his hope had been that shrine grass posted off to two friends suffering from cancer might bring them miraculous benefit.

In the temple site he chose to separate from his companions in the midday, mid-May, pre-tourist sunlight and mimic the actions of classical hopefuls in the precincts of the god, copying what they did physically (Iie down under hogweed, under seeded grass) and summoning by his timing (the very eye of the day) a supernatural visitation – not the divine himself but Hygeia, his daughter, by reputation the shining beacon of female compassion (still clarifying the haven of light she was, the inextinguishable lamp in the darkness (the undarkening door).

The sequence’s initial proposition and ensuing links with medicine and medics are all clarified.

Time may have revealed the realities of childbirth yet the Mossbawn room at the source of child-Heaney’s imaginings stays pure reality; his vivid recall (standing the passage of time)  pictures his exhausted mother (asIeep) in a bed made resplendent by the routine (usual) use and re-use of sheets put on for the doctor, wedding presents only brought out for important ‘semi-public’ occasions (useful at births and deaths).

The scene remains crystal clear: child-Heaney in attendance (me at the bedside), lying, if not quite in Epidaurus mode (incubating for real) … inquisitive (peering), observing his semi-conscious mother as she closes and opens her eyes, sensing the love in her faraway smile and in whose, goddess-like precinct of vision he is visible to her.

The sequence’s wheel comes full circle: child-Heaney clung onto his mother’s recurrent (every time … be asked) fatigued elation (hoarsened whisper of triumph) and took her words literally (what do you think of the new wee baby the doctor brought for us all?) 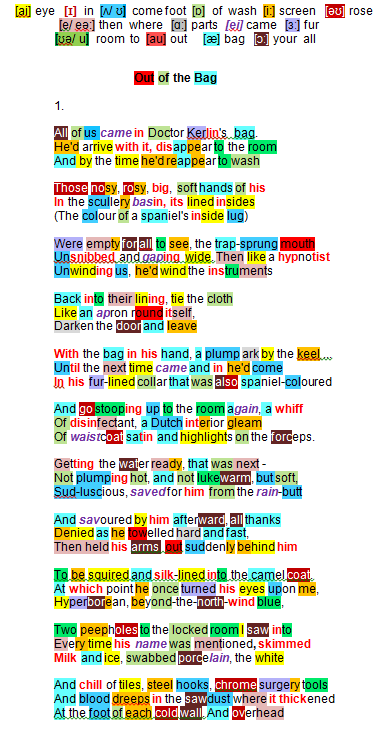 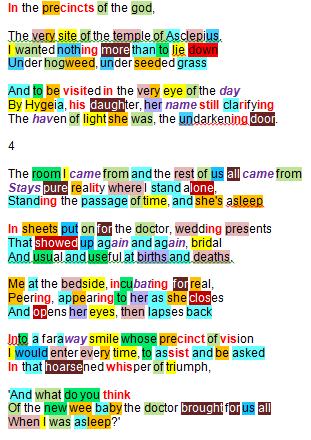 Seamus Heaney received his Honorary Fellowship to the Royal College of Physicians of Ireland in June 2011, at the conferring ceremony Padraic Mac Mathuna, an RCPI Fellow and family friend of Seamus Heaney delivered the citation. He started with a quote from Franz Kafka who remarked that ‘In Medical Science one tries to tell people, in such a way as to be understood by everyone, something that no one ever knew before. But in poetry, it’s the opposite‘.