In the introduction to his translation of Beowulf Heaney paid tribute to the first millennium author of  ‘a work of the greatest imaginative vitality, a masterpiece where the structuring of the tale is as elaborate as the beautiful contrivances of its language … which is today called Anglo-Saxon or Old English’.

His use, in the title, of ‘tongue’ which is of a similar period might shed light on his anonymous third person pronoun and aim his poetic intention solely in the direction of the poet of Beowulf.

However the poem’s dedication to friend and recently deceased Ted Hughes, a twentieth century English Poet Laureate of huge stature plus, perhaps, the absence of ‘Old’ in the title suggests, to those accustomed to the subtlety of Heaney’s titles, that he is deliberately leaving things open and that we should look for associative clues in what follows.

A body of opinion suggested that Heaney had been reading Ted Hughes’ ‘Birthday Letters’ (1998) published very shortly before Hughes’ death …a work prompted by the suicide of his American poet wife, Sylvia Plath 35 years earlier following whose death Hughes suffered much criticism.

In contrast Hughes’ circumstances were judged by some, perhaps by Heaney himself, as a ‘no-win’ situation with a huge emotional legacy; this might suggest a deliberate link with the fate of king Hrethel in Beowulf;

Ted Hughes: (1930-98): English poet appointed Poet Laureate in 1984; children’s writer, translator, critic, anthologist, playwright; born in the Yorkshire Pennines and a Yorkshireman through and through. Heaney’s translation of Beowulf and his poem ‘Stern’ are also dedicated to Hughes’s memory; essays on Hughes are included in Finders Keepers. Heaney and Hughes co-edited The Rattle Bag (J982) and The School Bag (1997). Letters (J998);

Introduction of the poem’s recurrent motif  of ‘hurt in hiding’.

Heaney alludes to the range of things people have done in an earlier time (post … post … post), that eventually demand attention (in the end) – things  over yet on record (not past a thing) – things deserving of compassionate consideration (understanding), validly re-stated (telling), suggesting that bygones should be put to rest (forgiveness).

Heaney salutes the soul that ‘exceeds its circumstances’ when things are beyond personal control (often past oneself), able to express the recurrent aftershocks of pain and conscience (pounded like a shore by the roller griefs) with massive poignancy (language that can still knock language sideways). Both the poet of Beowulf and Hughes fit this bill.

His emotional immersion in an anonymous piece of work has taken Heaney (stood looking back) to a ‘somewhere-else’, a familiar retreat (bridge I had passed under) – a specific railway bridge (single span and bull’s eye … at Anahorish), a chosen spot for him to gather thoughts and feelings (so intimate in there).

In this place his senses are in tune with the surroundings – the quivering droplet about to fall (tremor-drip), the perceptible not-quite-silence (cranial acoustic of the stone) – and the surroundings are alive to him: enclosed space is an eavesdropper(arch-ear to the ground), a fly-on-the-wall (listening post), prepared to question itself (open to the light), leading him across an ultra-sensitive threshold (limen world) into self-awareness (soul on its lonely path).

The railroad itself provides meaningful correspondences  – a twin-track layout leading to and from fixed points … used to passing traffic (rails on either side shining) … alleviating anxiety (fretful part of me … steadied) and helping him up life’s upward slope ((cogged) by its very stability (bolted stillness).

His private pause fortifies (one come out of an upper room), soothes (fret no more), prepares him to face the world outside (walk abroad confirmed).

Heaney launches an attack on those who dare reject repressed pain (passive suffering) as a fitting theme for poetry.

He has met it expressed in its finest form (the best of it) in Beowulf where the Anglo-Saxon poet describes misery reduced to silence (dumbfounding of woe), the debilitating anxiety (stunt and stress) of pain left to fester within the self (hurt-in-hiding).

Hrethel (wronged father) is caught between rock and hard place – the agonising (grief-trap) loss of one of his sons in an accident and the code of honour that compels him (by Iove and blood) to punish the perceived murderer (redress from the son who had survived).

The ‘lose-lose’ situation that Beowulf’s anonymous poet expressed so eloquently (from his word-hoard) opens the way for Heaney (I reword here) to allude, perhaps, to the emotional consequences of the ill-fated relationship between dedicatee Ted Hughes and Sylvia Plath (a life and a love balked) set out in Hughes’ Birthday Letters.

Heaney reckons he once sensed a correspondence between the world of Beowulf and the uncontrolled forces in play in his own world: on a nocturnal tramp through the wilds of Dartmoor his senses were hijacked by the seismic power of a local power-station kicking in (earth tremors) akin to a Grendel’s-mother-like creature wailing in its pit. What he could only hear (under the heath), took him not uphill to the group’s destination (the promised tor), but down into joyless underground bunkers (sullen halls) where Beowulf’s insecure kings and their retinue slept only fitfully (encumbered sleepers groaned).

Heaney sustains the theme of passive suffering and hurt-in-hiding as he reworks  ll.2444-66 of his Beowulf translation.

The poet’s version asks (imagine) how anyone would fail to be moved by the pathos of an old man’s situation: Hrethel faced with his second son’s body … on the gallows … his pain no longer ‘hurt-in-hiding’ (keen and weep for his boy) … looked down upon by the smirking icon of misfortune (black raven gloats) … Hrethel doomed by circumstances (no help … wisdom of age … worthless to him) … left with a recurrent nightmare that saps the will to live and could only be eased  were he to sire a replacement (another heir … born in the hall) for a son irretrievably lost (entered the door of death forever).

Grief and gloom prevail in the chamber his son once frequented (banquet hall bereft of all delight), its source of heat long cold (windswept hearthstone), the king’s defenders in limbo (sleeping … under earth).

Nothing courtly to lift his spirits: no pleasurable distraction (tune from harp); no noisy comradeship (cheering in the yard). A man alone with his longing … on his bed, whimpering his grief (sings a lament), world-weary (everything is too large, the steadings and the fields).

The accumulation (woes … griefs) will shorten his existence (doomed lord) because the code enlisting a cycle of murder and revenge left him no way out: (helpless to set to right the wrong committed). How Northern-Ireland/ Ted Hughes is that?

I am suggesting: read ‘Hrethel’ but consider a parallel Heaney was only too familiar with: Ted Hughes, powerless to change ‘no-win’ publicity and a stricken conscience that would eat away at him after Sylvia Plath’s suicide in 1963 and the suicide of Assia Wevill six years later.

Heaney reflects on the poetic voice and its deployment  – to reveal or not to reveal openly the hurt-in-hiding of a personal friend is a matter of conscience: (soul has its scruples) … Heaney’s moral sense regards what is beyond public statement (things not to be said) and should remain unsaid (things for keeping) as a principle that enables him to look his conscience in the eye (the small-hours gaze open and steady).

As a poet Heaney hopes for moral approval of what he pens (the aye of God) and he remains shoulder to shoulder with his ‘Giant at My Shoulder’ (as Milosz says) who defined poetic output as a personal gift to mankind (‘dividend from ourselves’), a bonus payment that holds up to the light (tribute paid by what we have been true to).

And that, concludes Heaney, very much includes the theme of ‘passive suffering … hurt-in-hiding’, be it of a fictional Scandinavian king or a British Poet Laureate (a thing allowed). 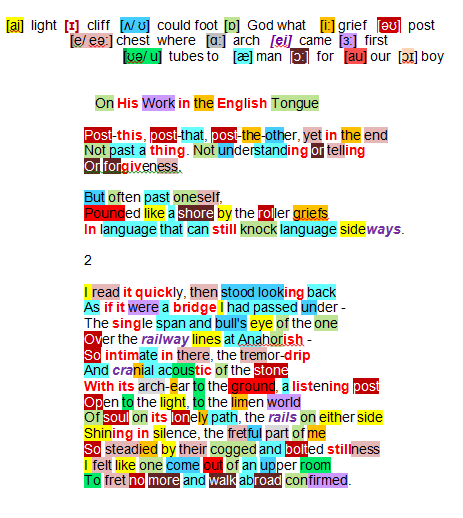