The poem explore a youngster’s hero-worship of a cow-man from a mysterious Irish Republic background, highly skilled in working with cattle around the farm spending his day off wagering his income. The ‘big country’ landscapes of the title  and the country music the cowman croons recall the silver-screen  relationship that grew between boy Joey Starrett and cowboy Shane in the 1953 western film .‘Shane’ was set in Wyoming, USA; Dologhan has ‘worked in Montana’, a neighbouring State. The poem is set in the early 1940s.

Take 1: set in an Ulster farmyard with its characteristic double-panel stable doors – a youngster’s attention (I was five years old) is captured by an enigmatic farmhand – as the boy looks back, the lens moves from his facial expression to zoom in on the cowman, equally interested, watching him depart.

To the young boy’s mind the cowman has what it takes for superman status: John Dologhan, the best milker ever to come about the place.

Take 2: the cowhand’s unique ‘cow-whisperer’ approach, as he croons a romantic Co Kilkenny ballad (‘The Rose of Mooncoin’) to soothe the beast he is milking: his head to the cow’s side.

Take 3: a farm kitchen – the cowman entertains the boy with a rudimentary wheel of fortune (spin his table knife) waiting for it to mark the boy out (blade stopped with its point towards me) and spark off (bright path), for no particular reason the child can think of, a kind of kindred-spiritness (recognition  that made no sense),

Take 4: a previous occasion – Dologhan pretended to be a horse, holding its eye-shades (winkers) up to his own face to cause the boy amusement.

Dologhan has much in common with the cowpokes the boy will see on the silver-screen – a guy who turned up out of the blue (apparition), itinerant from a strange land (rambler from the Free State) and chancer (gambler).

Take 5: Dologhan at rest, amidst a group of men hidden from the public eye in the space under Butler’s Bridge on train-free days in Castledawson (Sunday mornings).

Camerawork focuses initially on the slow-motion parabolic rise and fall of pitched coins (all eyes as the pennies rose and slowed and downed then, when they hit the ground, on the scramble of interest amongst the gamblers (tight-bunched crowd).

Take 6: the camera lens pans from light to shadow, initially following the bright reflection of the receding track (sunlight on far lines) across creosoted sleepers and hot stones  and coming to rest on the indolent Dologhan and his claim to fame (who’d worked in Montana once), happy to laze away his time-off out of the sun (the cool shade of the arch). 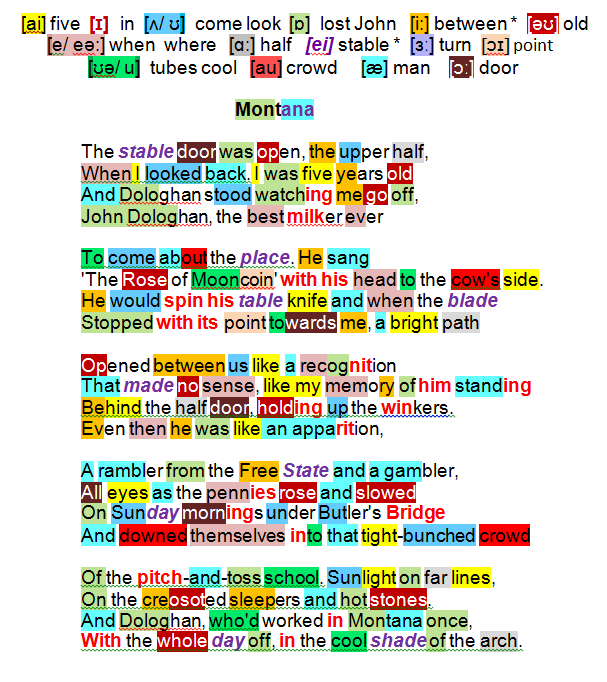