In this dramatic travelogue of May 1998 Heaney describes what he met ‘on tour’ in countries from the former Yugoslavian bloc. The responses generated range from the sheer joy of mixing with fellow poets at Struga to  the troubling evidence of ethnic cleansing, from the beauty of the Balkan surroundings to the power of the Eastern Church. You could take Heaney out of Ireland but you cannot take Ireland out of Heaney … he has lived alongside these issues at home.

His Balkan adventure over Heaney reverts seamlessly to his western European ways.

To mix with new faces in Struga, some of them familiar to him others not, clearly suited Heaney well – the shared bonhomie, the discovery of new voices, accents and idiosyncrasies faithfully observed – his head is bursting with memories of this first stage in his wide-ranging trip.

Heaney was being transported over mountainous terrain at break-neck speed in a taxi; its Macedonian driver’s nerve (‘Nema problema!) at odds with the stridency of his voice, the squeal of tyres (screech) and his white-knuckle steering (every unfenced corner on the pass).

Struga Poetry Festival’s welcome-party was equally stridently over-the-top (‘Beria! Beria! Beria!’ – a ritual of vodka drinking (smashed a vodka glass), unrelenting (filled another) – and setting the alcoholic tone for Struga ‘78 … when we hardly ever sobered.

Next a German, Hans Magnus Enzensberger – not quite as people anticipated (unexpected), dapper (sharp in panama hat), immaculately tailored (pressed-to-a-T cream linen suit) but not sufficiently overstated to make him a figure of fun (he gets away with it).

Finally an enigmatic Dane who claimed he could predict a future based on experimental ideas (soothsaying … of the avant-garde) and who showed an Intense interest in eastern-style architectural features (squinting up at a squinch), his eyes as limpid as the water of a local beauty spot (coral floor of Lake Ohrid).

The Dane’s bizarre command of English and odd interpretation of Heaney’s work found a place in the poet’s notebook (‘Is this not you, these mosaics and madonnas?  You are a south. Your bogs were summer bogs’).

Heaney’s tour has taken him 400 miles north of Struga into Serbia, to Belgrade where he notes contrasts between his ‘known’ Irish world and Serbian street life, his old-in-new (my west-in-east).

On the other hand big-city Belgrade from outside Heaney’s known world … ethnically distinctive and largely male  (men in fezes)  … the familiar smell, taste and texture of coffee back home replaced by a dense, flavoursome alternative (short and sweetening mud-slide).

Something has rattled Heaney; he is back home in his teens (at the still centre of the cardinal points); he is seeing the  flypaper in the family kitchen, posted deliberately to lure the nasty fly population (honey-strip) to its destruction (death-trap) using sweetness (barley-sugar twist) to be rid of the unhealthy invaders (glut and loathing).

What he witnessed in Serbia gave off bad vibes: ethnic displacement on a massive scale: refugees fleeing for their lives: in large numbers (loaded), by whatever wheeled means (tractor mudguards … farm carts… trailers, ruck-shifters, box-barrows, prams) and whatever their state of health (on sticks, on crutches, on each other’s shoulders) – a hellish serpentine flow (like a syrup of Styx).

The Balkan world has been equally out of joint, the world  collapsing from its cosmic orbit (old gold world-chain) into an upheaval recorded by global media (the cloud-boil of a camera lens).

Heaney’s compassion and despair are evident: whatever happened to the Garden of Eden that life once seemed to promise (summer, shade and coolness … an open door at sunlight) … what became of innocence (paradise lost) … … were all those promises empty  (what I was taught)?

The depressing moments of the tour generated echoes of social breakdown in Northern Ireland (old sense of a tragedy going on). Heaney laments history’s unlearned lessons (uncomprehended), knows just how close disintegration is to everyday normality (at the very edge of the usual) and his inability to escape the memory (it never left me once).

In the foreground transported by two youths a religious icon in distress (a wounded angel carried by two farm youngsters across an open field). The middle ground is empty of political insinuation (marshland, estuary light) but Heaney’s background adds an industrial landscape (farther shore with factory chimneys) reminiscent of Finland’s socialist thirties and invoking deep-seated Finnish distress (the shale and slag and sloblands of great hurt).

The central spiritual icon (first communion angel with big white wings) is a victim of conflict (white bandage round her brow); the wilting snowdrops she bears (white flowers in hand) seem to offer no hope.

The angel cannot lie comfortably – her emergency transport has no bed-canvas (a makeshift stretcher). The youngsters who transport her are unsophisticated (manchild) and shiver in garments (round soft hat … bumfreezer) and hand-me-downs (his father’s wellingtons).

Heaney has no difficulty in recognizing allegory, but stops short (who’s  to know) of offering a definitive view of the painter’s intent via facial expression (sullen? resigned? angry? anguished?) or whether, indeed, he should read into it sorrow rightly, or at all.

Heaney’s sense of social breakdown orbiting ‘the very edge of the usual’ returns: the image of an abandoned Serbian home (open door) once lived in (worn saddle …  granite of the doorstep slab) conjures up an Old Testament identification drama (see note) … enter another angel, not Simberg’s distressed icon (this one in good shape – fit as ever) drawing ominous attention to each house with a doorstep daubed ‘Serb house’.

The meld of fact and fiction in a poem (How does the real get into the made-up?) is a mystery to Heaney himself (ask me an easier one).

What he can remember for sure is a missed poetry-reading (our taxi-man, for all his speed, was late) in an incongruous venue (cement factory in the mountains) and, instead of culture, a boozy midday reception (liquid lunch) with left-wing bosses (comrade managers), a nap to sleep it off (siesta) and predictable after-effects (woozy wake-ups just before sunset).

His note-book recalls the arduous aftermath: a massive gathering (field full of folk) … beasts of burden (packhorses with panniers) … a challenging hilltop destination (uphill push of families) … an continuous procession of devotees (unending pilgrim stream) … a double celebration, in part to do with labour solidarity (workers’ day in memory of General Strike) in part a spiritual devotion (Greek Orthodox Madonna’s Day).

The track barely deserved to be called ‘road’ (dry water course, rattling stones), the travellers were downcast (subdued by the murmuring crowd).

A mystical figure (water-blesser) stood out, not part of the clerical team (on a rock apart ), ascetic (EI Greco-gaunt), hermit-like (cinctured) who, though dismissed as a charlatan by the local guide (‘Magician,’ said Vladimir) as he promoted himself (waving his cross), earned a response from the pilgrims (tins and jampotfuls held up).

Heaney was struck by religious parallels and variants: eastern orthodox imagery (icon being carried), shared symbols of prayer (candles lit), decorative sights with local fragrances (flowers and sweet basil in abundance) …clearly an act of eastern worship (some kind of mass) within the sanctuary (behind the iconostasis), incense carrying the prayers of the faithful heavenwards (censer swung and carried through the crowd).

For Heaney this Catholic déjà-vu (I had been there, I knew this) left him with the same old questions as to whether religion actually changed anything (haunted by it as by an unread dream).

After, and only after, the final money-raising event (the sale of holy objects) did the exhausted pilgrims break their fast with very simple fare (a taste of their bread and olives).

Oh! the contrast … poised to return home the adventurer quickly shook off his rough-hewn Balkans’ experience, turning back into the seasoned traveller aboard a global carrier, familiar with the rivet-shaking thrust (Boeing’s innards trembled) that launched the aircraft into the blue (the pure serene) , set to enjoy the protection of international beacon systems (protocols of Air Traffic Control), the perks of a global brand (courtesy of Lufthansa), obedient to regulation (seat belt fastened as instructed), enjoying a cigarette (the minute the No Smoking went off), accepting with a faintly superior nod  (slight de haul en bas) the complimentary drinks (my due when wine was poured) already tuned in (headphoned head).

The Balkans’ package  –  Nema problema. The airline – Ja.  Nothing to stop him – aII systems go!! 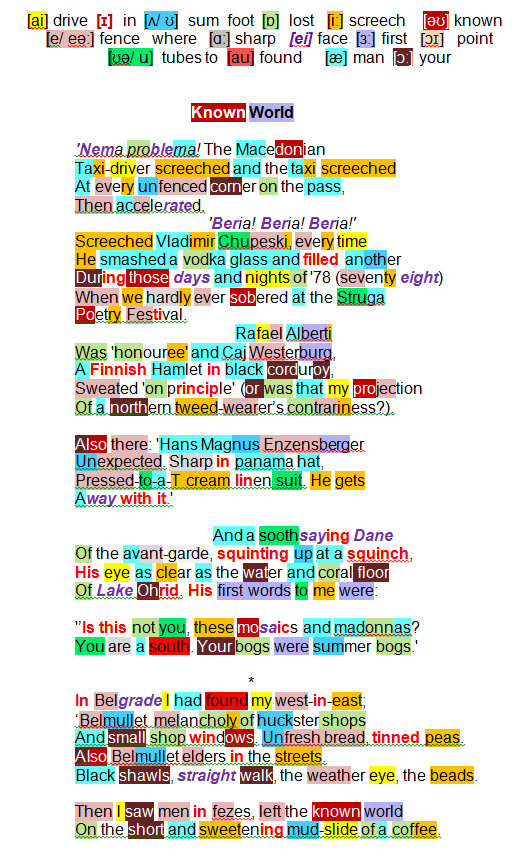 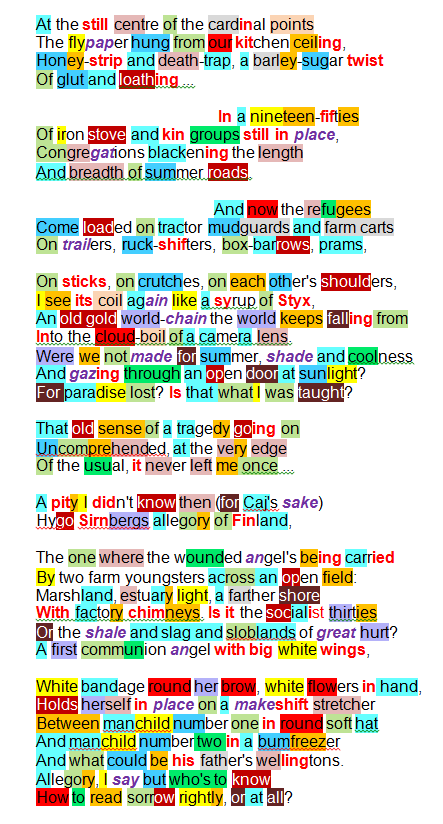