Drawn from his readings and personal experiences Heaney dips into recorded events, real and mystical individuals and landscapes on both sides of the Irish Sea. Heaney’s title alludes also to the creative spirit’s small-hours wait for inspiration.

Heaney pulls out an episode recounted by an illustrious Irish medical figure of 1849 reviewing the antiquities and spiritual sites along the river Boyne. He picks out the story of a miracle that helped a humble monk along the road to sainthood: a scribe (monk of Clonard) … dedicated (working late) … suddenly plunged in darkness (candle burnt out) … a supernatural occurrence – writing implement turned torch (quill pen feathered itself) that produced the miraculous light enabling the cleric to fulfil his mission.

Heaney’s images of the quivering light (shadow-flit) and reflective surfaces (Ink-gleam and quill-shine) within the monk’s cell at an ungodly hour (late now in the day) remind him of his own need for miracles (their likes) –  things with poetic charge that spring up and stir his creative juices (freshets and rivulets) – unpredictable arrivals (starting from nowhere) that spread elation round his system (capillaries of joy) and by their very volatility (frittered and flittering) open layers of association in his memory bank.

One such springs up immediately (flashed on my inner eye): David Thomson, on the road, remembered for the liquid arc that relieved a compelling personal need (scimitar of cowpiss in the wind) … the man emerging from his overnight in an ill lit farm building (murky byre), responding like a cow released from winter quarters (cow let out in spring) and immersing himself fully in Nature’s rich sense data (smelling green weed, up to his hips in grass).

Thomson,  nearly blinded as a boy (dark-roomed David), author of a work born of his youthful Scottish experiences (Nairn in Darkness and Light), whose restricted vision (injured eyes) created images dependent on his remaining senses (waves and waterfalls in young girls’ hair).

Heaney conjures up images of the ageing character he came across a lifetime later: the man’s unquenchable joie de vivre (glee of boyhood still alive and kicking), his gaunt self-neglect (tattered stick-man), his engaging wackiness (erotic fancy-tickler), contentedly itinerant (never more at home than when on the road responding as a child (led by amazement),  able to invent surreal scenes off the Galway coast (a seal walking ahead of him up the Aran shingle), dressing like a Funeral Director (clawhammer coat and top hat) as if prepared if necessary to create business for himself (dressed to kill) but in fact merely on his way to quench his appetites (public house or kitchen) as if nothing were (the way he would himself).

Acting as if he were delivered from a watery grave as with the hero of a Pushkin poem (Arion … off the waves, off the dolphin’s back) and ostensibly living in an elsewhere (oblivious-seeming) Thomson was  actually totally with it (taking it all in), delighted still to be alive (glad of another chance) and appreciative of such good fortune (believe his luck). 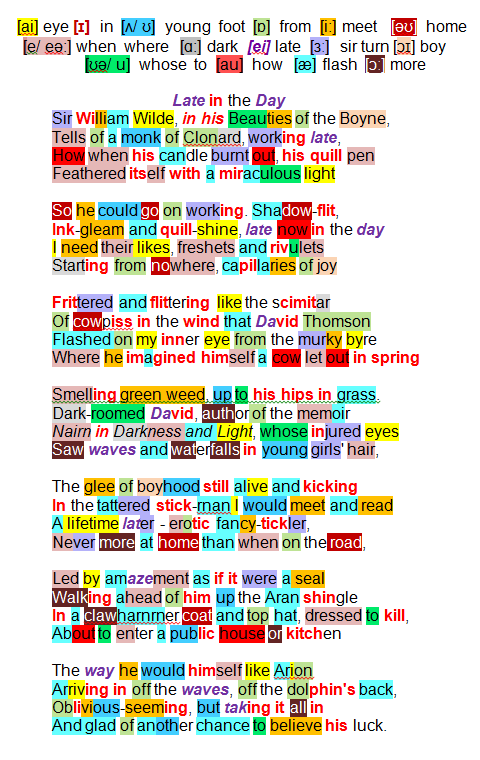